Wooden foundations, a leaning bell tower, and a gigamachine: the hidden science of soil

This method of foundations was not new when it started to be used in Amsterdam. Nor has it fallen out of use. Nowadays, there are still large construction projects like bridges and highways that use wooden pilings to transfer the structure’s load to the deeper, solid layers of soil and thereby save the difficulties of building on soft ground.

“The problem of foundations for structures on soft soil, where a direct foundation is not possible, has occupied the minds of builders throughout history,” explains Juan Carlos Guerra Torralbo, project manager in the field of geotechnics at Ferrovial Agroman, who delves into the nature and behavior of land in his latest book, ‘Mecánica de suelos. Conceptos básicos y aplicaciones’ (‘Mechanics of soils. Basic concepts and applications’). 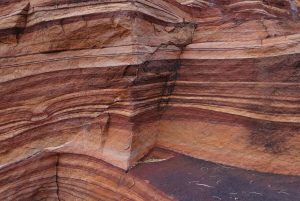 The composition of the ground indicates its behavior when it comes to bearing external tensions. | Source: Pxhere

The ground and its elements

Ever since humankind started to devise the first dwellings and the first communication routes, soil has become another element on their constructionist mind. It was no longer just the plane on which their world sat, but another piece of construction, an element to mold and change to their whims (provided that techniques and physics allowed it).

“Soil is a material composed of a set of solid particles among which there are gaps and pores. The main difficulty in understanding the behavior of soil when exposed to external demands stems from this polyphase character, since its response depends on the complex interaction among the phases of which it is composed,” explains Guerra Torralbo.

Traditionally, soils are divided into two large groups: granulates (sands) and cohesives (clays). Between them, of course, there is a wide range of transitional terrains. Therefore, when it comes to planning and executing a work, the first thing is identifying the elements and the characteristics of the soil. The size of the grains, their distribution, and their Atterberg limits (related to the amount of water in and plasticity of the soil) are typically studied.

Additionally, chemical tests are carried out to determine the organic content, the level of sulphates and soluble salts, the presence of gypsum, and the acidity in order to determine the abrasiveness of the soil. The properties of the soil’s condition (such as humidity and specific gravity) may also be studied. And when excavation goes below the water table (indicated the depth reached by the uppermost level of water accumulated in the subsoil), it may be necessary to know the soil’s permeability.

“It is obvious that every structure has to support itself on land, which can be thought of as another material: structure, foundation, and land. Now then, the land is less resistant and more ductile than the other man-made components. And that is why it is necessary to give the structure some supports or foundations that transfer and distribute the load carried by the structure over land,” the Ferrovial Agroman engineer points out. And here is where we return to the pilings of Amsterdam. 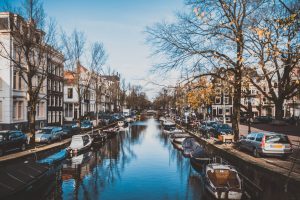 The science of changing the soil

A priori, it is possible to construct any type of soil. One only needs to pick the treatment of the proper land, the best structural solution, and the optimal constructive process. For centuries, the most used technique was driving prefabricated elements into the soil, like wooden pilings.

“Industrial development in the last century has allowed the boom of new technologies of treating the land, such as vibroflotation or vibrocompaction, that is, using a vibrating element penetrating deep into the earth.” As Guerra Torralbo explains, the vibration system always starts with a mass that spins in a metallic cylinder. The first vibroflotation machine was developed in Germany by W. Degen and S. Steuerman at the start of the ‘30s.

“Improving the characteristics of a soil through high-energy, controlled impacts is a method that has ancient origins. There are historical references to its use since the age of the Romans,” the engineer continues. Basically, this other technique consists of acting on the surface of the earth with a heavy mace that falls freely by way of a specially adapted crane.

This method became popular in the 1970s in France, Great Britain, and the United States. The gigamachine, designed by Louis Menard and capable of raising and releasing 200 tons from a height of 25 meters, is one of the great examples of this technique. This mace of gigantic proportions was used in construction of the Nice airport.

Today, the treatments that soils may receive to be adapted to construction needs are varied. In broad brushstrokes, they are methods that continue to step up the cohesion of the soil composition, increase shear strength, mobilize effective resistance, or act inside the earth, forming active or passive barriers, in order to reduce the structure’s movements.

The foundations of a structure are designed depending on the composition of the soil and its behavior. | Source: Unsplash | Author: valor kopeny

On tension, particles, and foundations

“In general, the mineral skeleton of soil is rather ductile. In fact, if the process of the natural sedimentation of a soil were observed at a microscopic level, it would show that its particles tend to group themselves forming chains,” explains Juan Carlos Guerra Torralbo. However, the classical mechanics of soil tends to study the behavior of soil from a macroscopic point of view, as if it were a continuous medium.

Normally, the tensions within a soil are caused by the weight of the soil itself and by external loads. The system of tensions is, in fact, rather complicated. There is one customary, simple case, however, when the surface of the earth is horizontal and when the nature of the soil varies very little horizontally. Normally, this is the case with sedimentary soils.

“In this case, we find vertical geostatic tensions and horizontal geostatic tensions,” the Ferrovial Agroman engineer points out. The first is calculated based on the weight of the soil above a certain depth. The second can vary between a wide range of limits, depending on whether the soil turns out to be compressed or spread out horizontally, either by the forces of nature or the works of humankind.

A structure’s foundations are, or at least should be, designed based on the soil’s composition and its behavior. “The function of a foundation is getting the forces present at the base of the structure properly transferred to the ground on which it rests,” says Guerra Torralbo. “That is why foundation design and planning is an art where various sciences overlap: geology, geotechnics, and structures.”

For the Ferrovial engineer, many buildings are designed with functional criteria in mind, and only at the end are the structure and foundation defined. “Now then, in special situations, it is obligatory for the foundation to be considered as an influential factor in the structure’s design. When it comes to thinking about the structural conception of a building, you must keep in mind the earth’s response to future loads it will carry,” he adds. 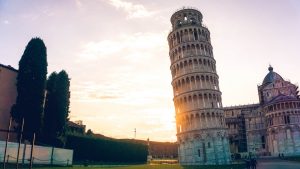 The Tower of Pisa has leaned, due to the difference in the consistency of the soil between its east and west sides | Source: Unsplash | Author: Yeo Khee

Geotechnics and a famous tower

Its construction started in 1173, and before it was finished the inhabitants of Pisa had noticed that it had started to lean. The tower of this famous Tuscan city would not be known without its lean. And the bell tower of the Duomo de Pisa, a Romanesque jewel, owes its fame (in addition to its 14,500 tons of limestone and marble) to the difference in the consistency of the soil between its east and west sides.

“We often laugh about this image of two engineers at the foot of the Tower of Pisa saying: I skimped a little on the foundation, but no one will ever notice. We should ask ourselves if it is fitting to skimp on the foundation when the future of the structure, whose cost is much higher than that of the foundations themselves, depends on it,” Juan Carlos Guerra Torralbo reflects.

In the 12th century, neither was geotechnics very developed, nor did anyone take it very seriously. “Good geotechnics research prevents making errors in choosing construction and structural solutions, and, therefore, unnecessary expenses and periods of time,” continues Guerra Torralbo. Every inspection starts with field research to get to know the physical and mechanical properties of the soil, in order to continue with sample studies in the lab and writing the final report.

Today, geotechnics has advanced so much that, with good field work and a thorough lab study, it is possible to predict the exact future behavior of the soil. If it were built today, the Tower of Pisa would probably not be leaning, nor would the interventions to halt its deterioration have been necessary. Though perhaps some solid foundations would have detracted from its claim to fame.