Smart grids have changed the business model of the electricity industry and the relationship between its players, from energy companies to the final consumer. They are the result of needing to transition from a centralized network to a more derived one, capable of managing the increasing complexity of supplying electricity in times of the digital revolution.

But, what is a smart grid? 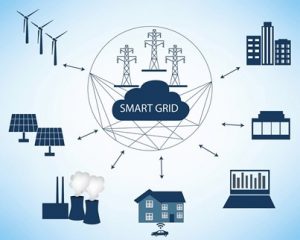 Essentially, smart grids are a system introduced to overcome the weakness of conventional electrical grids by using smart net meters. They allow one to monitor, analyze, control, and communicate within the energy supply chain to help improve efficiency, reduce consumption and costs, and maximize the transparency and reliability of the system.

In other words, by leveraging automation tools and other cutting-edge technologies, smart grids give a sound response to the volatile demand for electricity in the 21st century.

Its name combines the term “grid”, referred to a network of transmission lines, substations, transformers and facilities that deliver electricity from the power plant to your home or business; and “smart”, related to the implementation of digital technology in these traditional networks.

Their guiding principle is that energy is often lost because it must be consumed at the moment of its generation, and that a smarter system could help us transition to far more efficient grids.

You can better understand the concept behind these grids in the following video:

And how does a smart grid work?

A smart grid is an installation in which consumption levels are always visible—not only through the electricity bill, but because it is possible to monitor and measure the electrical behavior of each of the appliances connected to the infrastructure.

To achieve this, a smart grid incorporates automated computer systems capable of automatically responding to fluctuations in energy production. Thanks to this groundbreaking approach, both the end user and the distributor have more information, which paves the way for a more responsible use of the energy throughout the cycle: all the way from the generation plants to our households and offices.

Among the capabilities of these smart grids, we could highlight that they repair themselves, encourage consumer participation in grid operations, ensure a reliable and premium-quality supply even in the event of leakages, allow the electricity markets to grow, and can be operated more efficiently.

Some of its key features include:

Finally, what are the benefits of a smart grid?

While summarizing some of its features, we’ve already touched upon several benefits of smart grids, but it is also worth highlighting: 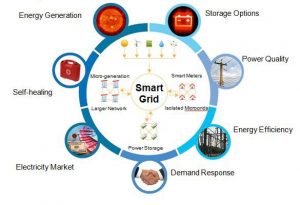 Many governments around the world have been encouraging the use of smart grids to help prevent global warming, become more resilient in case of emergency or increase their energetic autonomy.

For example, the EU introduced a 30-year strategic energy technology plan in 2006 for the development of a smart electricity system in order to meet its 2020 targets—which includes increasing energy efficiency, boosting its share of renewable sources and reducing its greenhouse gas emissions by 20%, among others.

In the US, 45 states and four territories already have mandatory net metering rules available for solar and wind renewable sources.

Among Latin American countries, the two key markets for smart grids have been Mexico and Brazil so far. Additionally, Argentina, Chile, and Peru are likely to veer towards smart grid systems as well, particularly to feed more renewable energy into their grids.

As for Asia, India has a target of installing 130 smart meters by 2021 under a Smart City initiative, and in 2013, China overtook the US as the world’s largest smart grid market.

So, it seems that Smart grids has arrived to stay and revolutionize the way we consume energy and contribute to create a more sustainable world. What will be next?