Bullet Pedestrians? The Sidewalks of the Future Could Make It Possible

“For short-range travel, moving sidewalks (with benches on either side, standing room in the center) will be making their appearance in downtown sections. They will be raised above the traffic.”

This is how  Isaac Asimov imagined the future of New York City in 1964, a future that would have arrived by 2014. Some of his predictions in that article (such as 3D movies or simple robots) have come true, but most of them have not. Nevertheless, these moving sidewalks could become a reality in the next few years.

From Medellin to Hong Kong, Lisbon to Vitoria, escalators have become a mobility alternative in many cities. Though there are those that defend and attack them, it is true that they facilitate walking in some urban areas. But could it be possible to turn all the sidewalks in a city into moving walkways where pedestrians can travel faster than cars?

The dream of moving sidewalks

The core idea in Asimov’s essay didn’t come out of nowhere. Other authors like Robert A. Heinlein and H.G. Wells had also dreamed up such infrastructure. As early as the nineteenth century, some engineers had dared to make them a reality. In 1871, American Albert Speer introduced his “endless sidewalks,” a system of conveyor belts that allowed pedestrians to travel at two speeds.

In 1889, France’s Eugéne Hénard came up with a similar system at the Exposition Universelle in Paris that year. However, the project did not come to fruition until the 1893 World’s Fair in Chicago. The invention was also on display at the Exhibition in Paris in 1900. They were all a system of parallel lanes traveling at different speeds, up to nine kilometers per hour.

But then the car came along and forever changed how we think of cities. The projects for moving sidewalks fell by the wayside. At the same time, urban centers grew up around paved streets and ever-smaller spaces for pedestrians. However, today some 40% to 50% of city travel is on foot.  And the idea of the city is changing.

According to Javier Villalba, head of the Regulations Unit of Spain’s Directorate-General for Traffic, cities are undergoing a process of urban transformation with the emergence of new vehicles. For him, it’s necessary to “shield public spaces for pedestrians and adapt them for individuals with less mobility.” This idea is gaining strength in many cities where moving sidewalks might fit in again.

Does the future belong to bullet pedestrians?

Just as cities have changed over the past century, so has the process of invention. The last attempt at moving sidewalks is here, thanks to science. A team from the Swiss Federal Institute of Technology in Lausanne in Switzerland has analyzed possibly implementing this system from different perspectives, and they believe it is feasible. The results of their research were published in the paper An exploration of moving walkways as a transport system in urban centers 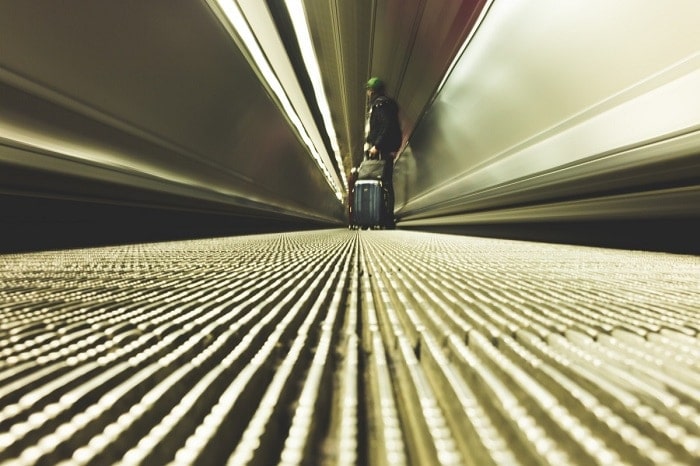 Today, moving walkways for pedestrians are common in some large buildings, such as airports. In light of a future where traffic in cities will likely be drastically reduced, Swiss researchers have pondered whether the model could be taken beyond isolated trips.

According to the study, urban buses maintain an average speed of 15 to 20 kilometers per hour in areas with a higher population density. During peak hours, private vehicles slow to an average speed of 15 kilometers per hour or even less. A Los Angeles resident spends 102 hours a year in traffic jams. One of the solutions to all these challenges could be moving sidewalks, according to the researchers.

At least on paper, the walkways could let pedestrians reach the average speeds of these vehicles. When walking on them, they could go upwards of 17 kilometers per hour with current technology. In addition, pedestrians would still have their flexibility, going where and how they want to, which is impossible in a vehicle. 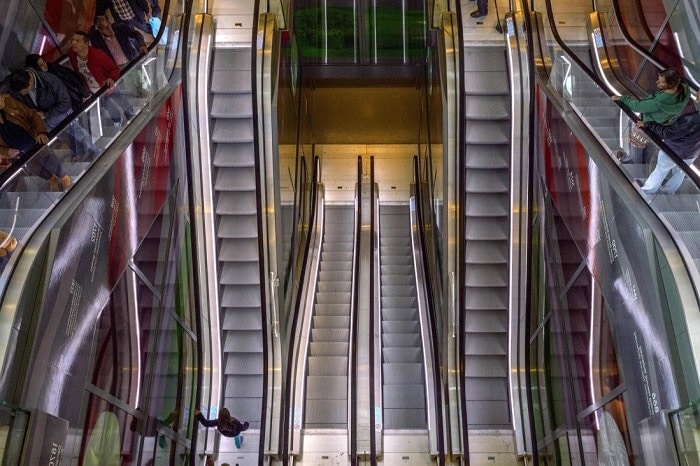 Escalators have taken over the urban landscape of a growing number of cities | Source: Pixnio

Escalators and urbanism in the 21st century

Commune 13 once became one of the most dangerous neighborhoods in the world. Today, this district in Medellin is an example of social recovery. The escalator project that connected the commune with the rest of the city opened the neighborhood up to the world, and it became a serious mobility alternative for most of its residents.

Escalators have multiplied in cities over the last few decades, and they’re probably the best real use case by which to measure the practicality of moving walkways. As pointed out in this article by City Lab, which analyzes the example of the Basque city of Vitoria, the urban and aesthetic impact on the city is significant. In addition, there’s the human factor or, perhaps, the human tendency to save energy.

According to the study Optimal speeds for walking and running, and walking on a moving walkway, which was done after analyzing the behavior of passengers on the moving walkways at airports, those passengers don’t usually accelerate to optimize travel time; they instead unconsciously lower their speed to minimize effort.

Either way, moving sidewalks and bullet pedestrians won’t be the only solution in the future of mobility. Twenty-first-century urbanism involves implementing different transport solutions, including moving walkways, that can be integrated with electric and self-driving vehicles, shared mobility systems, and bicycles.