Clean, Safe, and Tidy: This Is the Smart City That Leonardo da Vinci Dreamed Up 500 Years Ago

Streets with divided traffic. Pedestrian areas. Waterways. Buildings of different heights with exterior staircases. Routes designed to get the most out of sunlight and reduce damage from earthquakes. Some of these ideas may sound strange to us. But today, most of them are part of many of our cities. However, five centuries ago, they were still science fiction (at least in the Western world).

They all appear in Manuscript B  and Codex Atlanticus, and they belong to Leonardo da Vinci. It is likely that they weren’t all inventions of his. But they were observed and recorded by the Italian genius. From his texts (though most have been lost) emerges an innovative project for a clean, efficient city. A smart city that was 500 years ahead of its time. It just never became a reality. 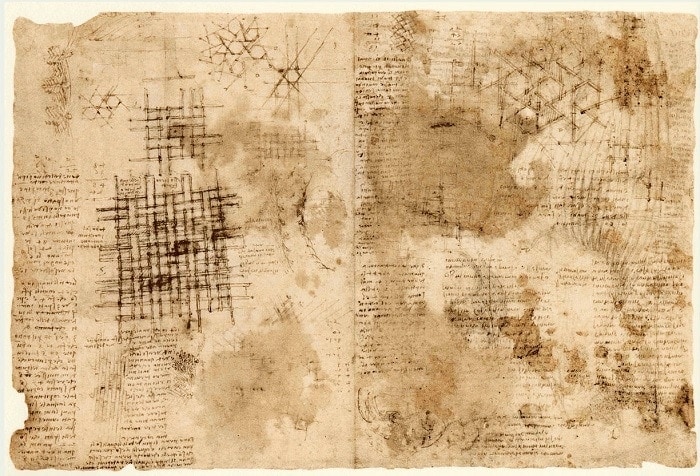 A page from the Codex Atlanticus, a 12-volume collection with drawings and writings by Da Vinci.

From lazzaretto to the cittá ideale

Throughout the 15th century, the city of Milan was obsessed with a project (though it didn’t come true until the end of the century). They wanted to build a building where they could quarantine the sick. The Renaissance blossomed, but the Italian city continued to suffer from outbreaks of the plague. In 1485 alone, more than 100,000 people died.

This lazzaretto, a common building for quarantining contagious patients, has to be well ventilated and have sanitary measures in place, such as one latrine per person. Moreover, it would be cut off from the rest of the city by a moat. Its construction began in 1488 and would last for more than 20 years. Even today, it is remembered with the via lazzaretto in the heart of the Lombard capital.

However, the impact of the plague of 1485 drove not only this project. Renaissance Italy had regained urbanism for the West. The chaotic, unhealthy cities of the Middle Ages had to be addressed. Construction projects such as Pienza (today a UNESCO heritage site) pursued the concept of cittá ideale. Not necessarily a beautiful city, but an efficient, clean, well-organized one. All of this served as inspiration for Leonardo da Vinci.

Ideal city prototype during the Renaissance.

The ideals of the Renaissance city

“Leonardo wanted a comfortable and spacious city, with well-ordered streets and architecture. He recommended “high, strong walls”, with “towers and battlements of all necessary and pleasant beauty”, and felt the place needed “the sublimity and magnificence of a holy temple”,” Alessandro Melis, Head Lecturer on Sustainable Cities from Portsmouth University, notes in this article. A city that should, from the start, fulfill Renaissance ideals – and not just those.

The ideal Renaissance city was based on – what else? – the precepts of classical architecture and urbanism. Inspired by Rome and Greece, Renaissance architects noted the importance of choosing a healthy place, the city’s design for withstanding nature (anything from animal attacks to storms), building spacious places for public activities, efficient organization, and more.

In short, a modern, rational city. A big investment was needed to make it possible since it basically had to be built from scratch (as with Pienza). Leonardo da Vinci chose a spot on the banks of the Ticino River, the largest tributary of the Po, to carry out his project for an ideal city. It never ended up getting built and over time, Renaissance standards fell into oblivion. It wasn’t until the 19th and the 20th century, particularly, that some of the lessons from Leonardo and his contemporaries were taken up again.

Da Vinci watched and created. His city project incorporated a lot of what his predecessors had done. But there were also some innovations of his own, such as the Museo Nazionale della Scienza e della Tecnologia Leonardo da Vinci, the smart city designed by the ingenious Italian more than five hundred years ago.

One of the buildings at different levels designed by Leonardo da Vinci.

Leonardo da Vinci´s ideal city was designed to house 30,000 people with good ventilation and lighting specs, and it had large, open spaces on the upper level to host public life. It certainly was one of the first in a series of tests to address the challenges posed by the mass of people and growing commercial activity in cities.

More than 500 years have come and gone, and one thing is for certain: Leonardo Da Vinci’s specific designs wouldn´t really fit in today’s cities. However, ideas such as the commitment to verticality, the prominent need for water and open spaces, integration with nature, and using the sun are still taken into account when it comes to thinking about the smart cities of the future.