Every Long Span Bridge in One Enormous Open Database

A project has gathered all of the information on big bridges from all over the internet in one place, the so-called Long Span Bridges Database. With a user-friendly interface based on Google Maps and data from various sources, it enables searching, filtering, comparing, and using all of its data in useful ways. 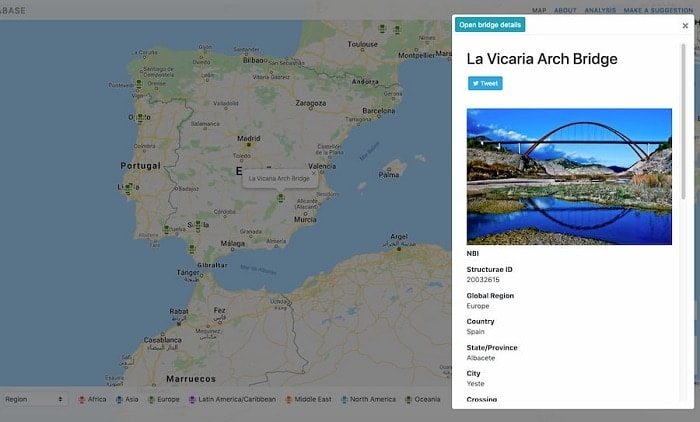 The project is an initiative from a team consisting of Dr. Colin Caprani, Dong Guo, and James De Maria from the civil engineering department at Monash University (Australia). The data comes from seven of the world’s regions (Africa, Asia, Europe, Latin America, the Middle East, North America, and Oceania) and 81 different countries in all.

As of today, the database has data on 751 “wide-spanning” bridges. And as there are thousands of types of bridges around the world from which to choose the most interesting ones, the main criterion was that its span – the distance in horizontal projection between its supports – be over 150 meters. This length usually separates the most common bridges – short spans, for which there are relatively common beams and construction techniques (box girder bridges) – from those with wider spans, which tend to be more irregular, unique, and varied.

Just click the icons on the project map to see all of the information, or you can search by name or even filter them by region, type, construction date, and other criteria. 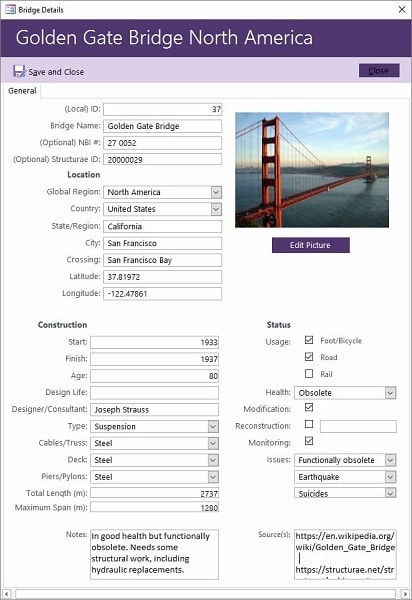 Microsoft Access was originally used to build the database from an existing database on bridges from the best-known literature. More data was added from Wikipedia (the free encyclopedia), Structurae (a gallery and structure database), and Bridge Reports (an inventory of data on bridges in the U.S.).

The data was put together to form a single database with 751 bridges (suspension bridges, arch bridges, cable-stayed bridges, underpinned bridges…) that were then handled with BatchGeo, Google Earth Pro, and hosted on a university server. Common issues with standardization and presentation were resolved in the process, and notes were made on recommendations for future releases.

Being able to have all that information enables a thorough comparative analysis between bridges. Data that can be visualized include the start and end date of construction, a bridge’s age, the designers and builders, the map location in coordinate form, or the dimensions, differentiating span from total length. The type of structure and materials (both cables and roof and pillars) are included, as is the state the bridge is in and what its primary purpose is: pedestrian, vehicular, or rail traffic. A concept called “Design Life” is also mentioned, and it refers to the “period when the bridge is deemed to be operational, before having to go through major structural repair or maintenance.” 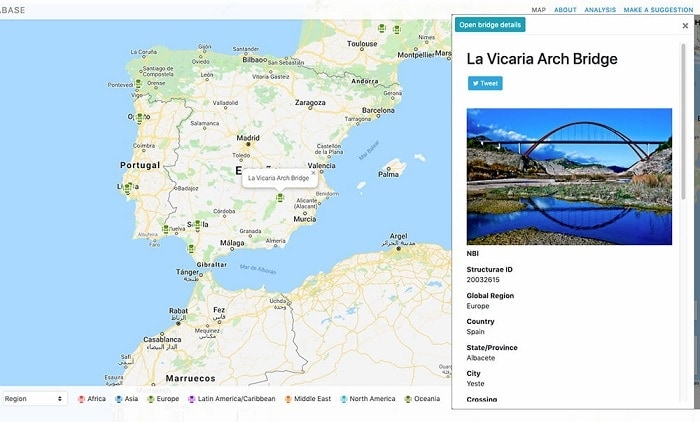 Although the page with the map that has all the bridges on it only shows a little data, the interesting thing is that, by clicking, you can go to the original sources and see many more, though this does then depend on those sources. For example, for the La Vicaría arch bridge in Albacete, which has a 170-meter span, is 260 meters long, and has 40 meters of clearance above the river, you can find more details on it through both Structurae and Wikipedia (English and Spanish). This includes both its construction timeline and the companies that supplied the building materials and related publications.

The site’s authors are open to collaboration and even have a form for whoever wants to send in information about new wide-spanning bridges or one that is not on the list yet for some reason. As is often the case on the Internet, this sort of resource benefits from collaboration with data-savvy individuals, who sometimes know as much as – if not more than –those who put it together.