Humans are social animals, and to such a degree that both our economy and democracy index depend on the level of development of the infrastructures that connect us. So it is normal that we should try to reduce the distances that separate us, whether by means of straighter itineraries, like the Romans did, or by faster vehicles that catapult us towards new social innovations.

When two routes meet at a point (a crossroads), we invent some means by which they can interrelate without one getting in the way of the other, like level crossings, or roundabouts. But what happens when sea routes come into conflict with elevated roads, or causeways? In this case we need cantilever bridges that “open and close” the channel in question, performing much the same function as a traffic light.

Isaac Newton once remarked that we build too many walls and not enough bridges. He died in London in 1727, long before he could have seen the London Tower Bridge designed, let alone constructed. For us it is hard to imagine London without this famous bridge linking the Tower of London with the south bank of the Thames right in the heart of the city.

Before the Tower Bridge came into existence, London Bridge, built in 1729 (Newton didn’t see this one either), was the only nearby means for pedestrians and coaches to cross the river. As the steam revolution took hold and the city expanded, the number of boats, ships and coaches multiplied, and further investment was required. 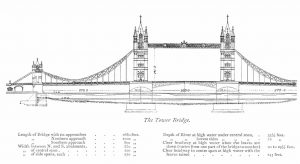 This investment came in the form of a bascule bridge, a moveable bridge capable of being raised to allow the passage of water-borne vessels. Every time this occurs, of course, the passage of pedestrians and other traffic is interrupted. The two lateral towers are not merely ornamental, their vertical weight preventing the bridge collapsing on itself when the massive gearing mechanism comes into operation.

Each of the bascules, or leaves, weighs more than 1000 tons, though a counterweight system reduces the energy required to move them, much like a seesaw with a child on each end balancing each other out.

Heading due east from the Thames Estuary would bring us directly to the Nieuwe Maas distributary (not to be confused with Mobility as a Service, or MaaS), the home of the Erasmusbrug, or Erasmus Bridge. This combined cable-stayed and bascule bridge is 802 metres long and features an eccentric pier that is neither symmetrical nor centred but which allows the passage of larger vessels under its 89-metre-long bascule.

The bridge does not need to be opened for all vessels, merely those transporting heavy cargo up and down the river. In the wonderful photo below we can see the Erasmusbrug in the middle, with the Koninginnebrug (white) and De Hef (green) Bridges nearer the top. The three cantilever bridges, each a different type, open sequentially for water-borne traffic entering and leaving the Rhine Estuary. 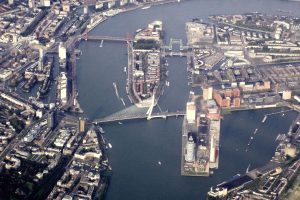 The Erasmusbrug is so large and “light” (6800 tons) that some of the movement of the longer cables caused by the wind had to be eliminated shortly after construction had been completed as dangerous levels of stress were being transferred to the structure, which had to be reinforced using massive shock absorbers, much like earthquake prevention systems.

Pont Jacques-Chaban-Delmas, the elevation of a motorway

Further south, in France, we can see one of the most amazing cantilever bridges ever built. Spanning the Garona River, a 117 m section of the bridge’s 575 metre length, a “girder” weighing some 3500 tons, is raised vertically up four supporting towers using a pulley system that features braided steel cables.

From the moment the operation begins until the deck is stationed at its maximum height over the heads of patient cyclists (the bridge features a bicycle lane) takes a total of 11 minutes. In the photograph you can appreciate the sun shining on the pilings of a horizontal gateway that is raised, as though it were a section of motorway, to allow the passage of vessels beneath. Quite something! 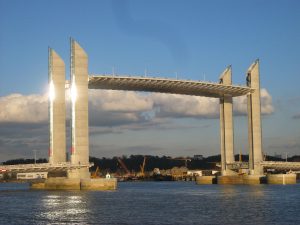 Depending on the height of the air draft – the term used for vertical distance from the waterline to the highest point of a boat or ship, the submerged part being the deep draft – the deck may be raised a greater or lesser distance. Moving the deck up and down is very costly in terms of both time and energy, so knowing exactly how far it has to be raised leads to significant savings every year.

The town of Corinth (Greece), which we are familiar with from history class, is also home to a canal of the same name. Small though it may be, the Corinth Canal is still used today by vessels of different sizes. Over the course of the river a number of bridges are ‘sunken’, rather than raised. 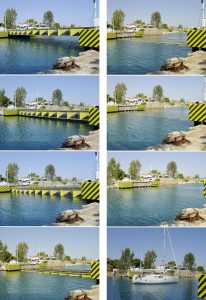 In other words, the deck is submerged in order to let boats pass then raised again to its original position. The idea is not a new one, and has been used extensively in other parts of the world, including some of the locks on the Panama Canal.

So, if these bridges do not impede the passage of a significant amount of water-borne or land traffic, why do we bother mentioning them? Well, because it is quite something to watch how the deck is lowered onto the bottom of the canal, which, incidentally, must be kept scrupulously, clean. In addition, these bridges avoid the problem of the height of the passing vessels, so they can be used by even the tallest sailboats.

The Vizcaya, or Portugalete Bridge

As we have already mentioned the Jacques-Chaban-Delmas Bridge, with its vertical movement, and the submersible bridges on the Corinth Canal, which are submerged before being raised to their original position, it would be remiss not to mention the Portugalete “raised” bridge. While technically it is indeed “raised”, it does not have to move vertically in order to allow the passage of vessels. 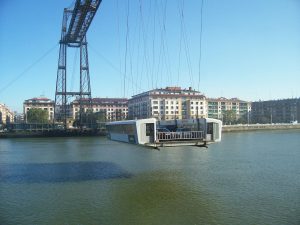 Instead, this shuttle bridge ferries a nacelle from one side of the Bilbao Estuary to the other. Whether you choose to call it a nacelle or a shuttle, this “flying castle”, built in 1893 and declared a World Heritage site in 2006, can be used to ferry hundreds of people and a significant number of vehicles at any one time, as can be seen in the photograph above.

The bridge is very popular with drivers and pedestrians due to the fact that the crossing, which takes just a few minutes, saves a 20-kilometre trip by road. And while river traffic is frequent, the views from the bridge are exceptional. The estuary is a meeting point for the hanging bridge and local water-borne traffic, and it is often the vessels that are obliged to navigate around the shuttle.

Rounding up our European tour we return to the United Kingdom, where we wish to highlight the Gateshead Millennium Bridge (not to be confused with the Millennium Bridge in London). The Gateshead Bridge is a pedestrian and cyclist tilt bridge that spans the River Tyne in the city of Newcastle. This one:

If this bridge causes a few raised eyebrows is it probably because both the counterweight and the part of the bridge that is raised are curved in such a way that every time the bridge opens it appears to “blink”. The ingenious design requires very little energy to move the structure.

In other words the deck does not have to be raised very high as the curved shape creates a “tunnel” through which water-borne traffic can circulate freely. Bridges connect us and bring us together, and some of them do so in the manner demonstrated in this and other European cantilever bridges.