The coffeehouse has taken its place next to the diner as America’s communal family room. People from every background go to coffeehouses for any of a multitude of reasons. Whether to hang out with friends, work in front of your laptop (cough cough), hold a business meeting, or meet with your Bible study group – everything happens at the café. They are ubiquitous spots found in every corner of the country.

Coffeehouses may now be ubiquitous, but that doesn’t mean they’re housed in dull buildings. Plenty of them live in unique spaces that began life with another purpose. Many of these structures were places that served communities in ways that reflected their origins.  Over time, these interesting historical spots have since been repurposed into 21st-century town squares.

The DoubleShot Coffee Company is a craft roaster in Tulsa, Oklahoma. The local roastery and café opened in 2004 and moved to its current location in 2019. What had been a vacant concrete lot in downtown Tulsa, is now home to a reconstructed 170-year old wooden barn from Indiana. The building has been named The Rookery and contains both a café and roastery.

The large barn was brought piece by piece to Oklahoma by Joel Collins, owner of design firm J. Collins & Associates, well before he and DoubleShot owner Brian Franklin began working on ideas for creating a new space for the coffeehouse. 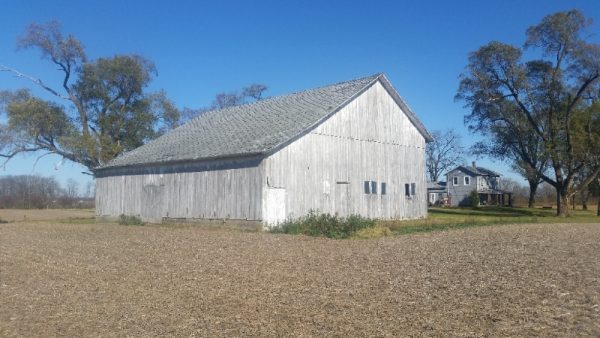 As the barn was built in the mid-1800s, all the wood was – of course – from local forests around Berne, Indiana. The barn, with its hand-hewn beams and wooden pegs, has that sturdy, well-worn, homey, yet gracious feel only naturally aged wood engenders. The new building has an asymmetrical roof that alludes to the barn’s original catslide roof, without exactly recreating it.

The barn has been expanded in various ways and now totals 6,000 square feet. Part of the barn front has been pushed out to create an atrium with a west-facing wall of windows that brings the sunshine into one of the café’s seating areas. On the backend, reclaimed bricks from an old Oklahoma Coca Cola plant have been used to build the space for the roastery. The loft floor, which holds more seating, is made of reclaimed wood taken from an Oklahoma oil field plank.

From housing cow stalls and a hayloft, the Rookery now serves the community as a meeting place with loads of seating to accommodate both the workers and the people-watchers. 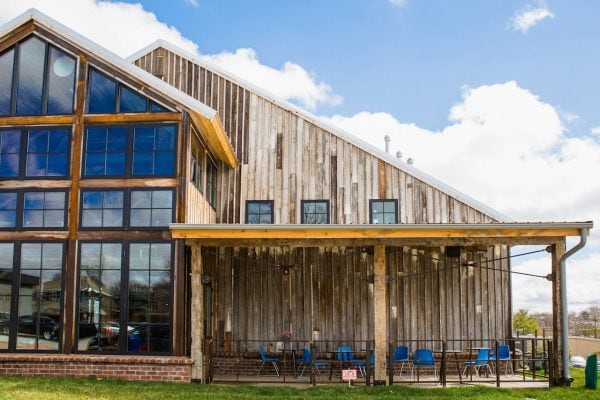 If you want to visit another café with a Coca Cola connection, head to Pipers Tea & Coffee in Paducah, Kentucky. This coffeehouse is spread across three first floor rooms that make up the front of an old Coca Cola bottling plant. The plant was built in 1938 and remained operational until 2005. The building was left unused until restoration began in 2012 when Ed and Meagan Musselman of Musselman Properties, bought it. The Musselmans, with a rehabilitation team that included general contractor Chris Black of Ray Black & Son, won the Ida Lee Willis Memorial Foundation Historic Preservation Award in 2017 for the restoration of the trapezoidal-shaped Coca Cola plant. 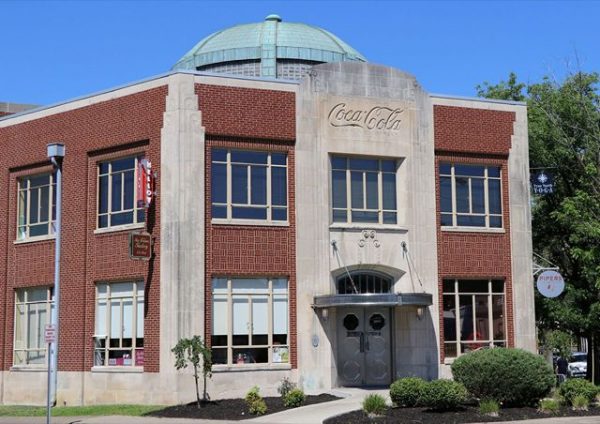 Part of the project included restoring the Art Deco building’s façade of red brick trimmed with limestone, which is also the exterior wall for the coffeehouse. The lobby, capped by a small copper dome, was also restored to its original design with a terrazzo floor and cantilevered, curving, terrazzo staircase. The entrance to the coffeehouse is just off the round lobby. Other businesses in the renovated building include a yoga studio and craft brewery. 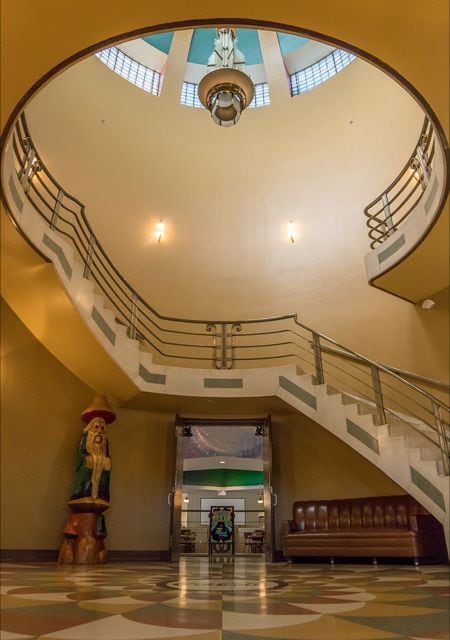 For example, the J.L. Wilson Building in Durant, Oklahoma, opened in 1901. By the 1920s, the theater ran on the first floor, while the Oklahoma National Guard used the second floor as a drill hall. The two-story building was added to the U.S. National Register of Historic Places in 1982 as one of the best-preserved pre-state buildings in the state. Today the first floor is a vast coffeehouse appropriately named Opera House Coffee. 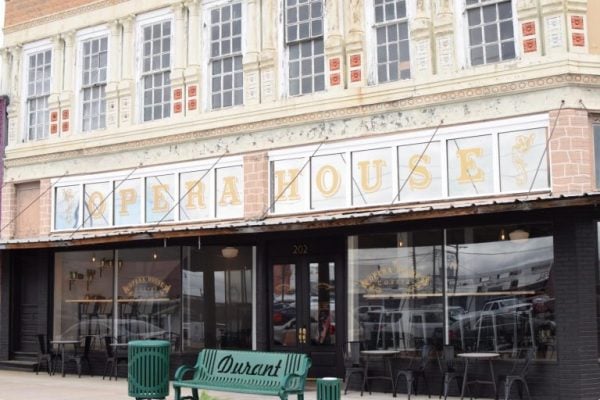 Owners Shaun and Ami Rawlings bought the building in 2017 and restored its local stone and pressed-tin exterior. The pressed-tin façade contains paired pilasters between the upper floor windows and a cornice detailed with traditional garlands. One of its most charming features is the bar seating on raised platforms that run along the front windows. 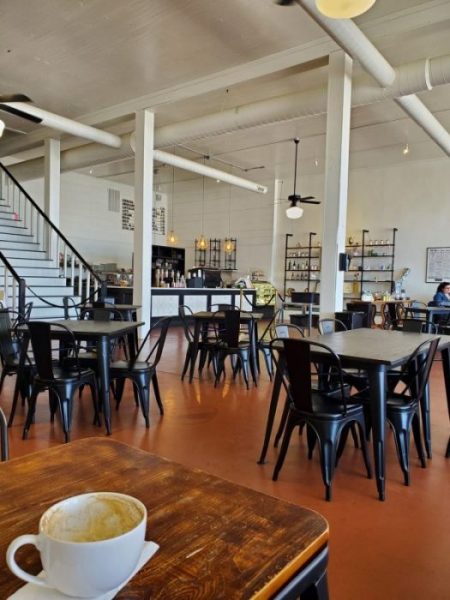 In Kansas City, Missouri, the Gillis Opera House is now the Opera House Coffee & Food Emporium. The original opera house, built in 1883, burnt down in an explosion in 1925. A new two-story opera house was built on the spot in 1926 by firm Siemens and Kurfiss. The opera house produced mostly burlesque shows until World War II, after which it became a cinema. The tapestry brick building didn’t require extraordinary restoration to retain its structural integrity, even when the building was left vacant for some years before becoming a multi-purpose commercial space in the 1990s. Today’s coffeehouse continues the building’s tradition of hosting live entertainment. 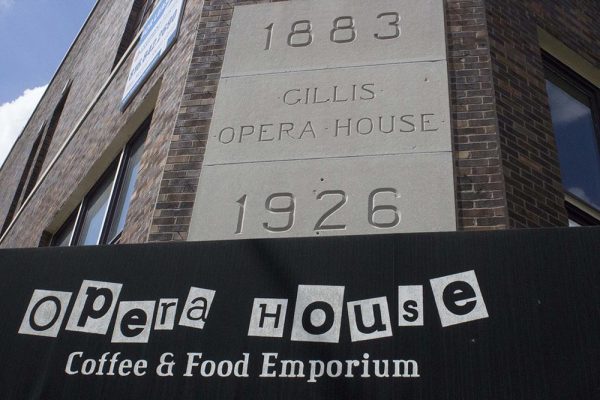 You might question whether the world needs a five-story Starbucks. There’s no question that Starbucks won a prize when it landed the former Crate & Barrel flagship for its newest Starbucks Reserve Roastery. The building at the corner of Michigan and Erie in the heart of Chicago’s Magnificent Mile was designed by Chicago architects Solomon Cordwell Buenz and opened in 1990.

The entire building was designed to be a large display case with four floors of large windows. The rest of the exterior is metal with white cladding. A skylight sits atop the cylinder, drawing in more light. The result was a light, clean, airy sensibility, both externally and internally, that perfectly manifested the furniture and homeware brand’s Scandinavian aesthetic. At the time it opened, one of the architects, John Buenz, said,

”If Crate and Barrel sold buildings, it would sell buildings like this one.” 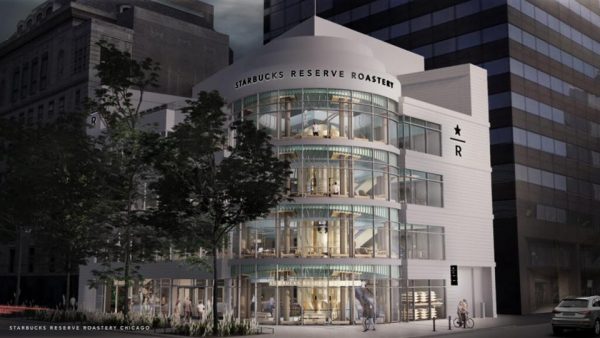 The building still has the same light, clean lines on its exterior. The only significant external renovation done was adding a rooftop café terrace that will only be open during spring and summer. Internally, the unfinished, light wood seating area in the cylinder space most reflects the Crate & Barrel atmosphere. The circular escalator that winds up all four floors remains as well. The rest of the interior is now done in a dark, warm honey motif that presses the ceilings and building down, especially when compared to the bright original interior design that always drew the sense upwards.

This Starbucks is more retail space and amusement park than sit down coffeehouse. Laptop warriors will not be working here. The bars throughout the space are for the serious tasters and the sit-down areas for the socializers.