What Will the Airports of the Future Be Like?

Airports, which are key hubs for connectivity and socioeconomic development in any region, have evolved over time to fit the needs of passengers and airlines.

The world is becoming increasingly globalized, and technology is moving forward by leaps and bounds, meaning that air traffic will continue to expand and cover more and more destinations. As such, airports will continue pursuing innovation as a key means to set themselves apart from their competitors.

In an attempt to shed some light on where airports are headed, here at Ferrovial Airports, we’ve analyzed a series of central areas and determined which ones will be the main players in the field for meeting and exceeding passenger expectations, as well as other stakeholders like airlines, employees, and local communities.

Airport access: a fundamental factor in the passenger experience

The way that users and employees access an airport is a determining factor in their experience. The increase in the number of travelers will require a wider selection of public transportation options, which must also be more and more respectful of the environment. Technologies like the Internet of Things paired with self-driving vehicles and on-demand systems will enable users and modes of transportation to create more flexible routes for passengers. At our airports – for instance, in the case of Southampton – pilot tests are already being carried out with self-driving buses for passenger transportation.

For those who prefer to get to the airport in their own vehicle, dynamic pricing is becoming more and more common on airport access roads. The prices will vary depending on air quality and traffic in the area. In any case, with the appearance of ride-hailing, car-sharing, and on-demand public transportation services, it is expected that the trend will mean fewer private vehicles in favor of models based on mobility as a service.

If we look even further into the future, we can expect that Hyperloop services will not only compete with air transportation for short-haul routes, but it will also provide a very fast mode of transportation between urban centers and airports. Some companies are even testing small-capacity, self-driving planes to connect cities and airports. This revolution is still in the distant future, but it will have a significant impact on airports as it will require them to accommodate a whole new range of vehicles at their aerodromes.

Technology, best friend to the airports of the future

We can’t help but imagine the airports of the future as spectacular, unique buildings. Still, if these new infrastructures aren’t intuitive for those who use them every day to travel the world, the passenger experience will not get any better.

One of the design elements for an airport that has more room for improvement is the check-in counter, which has already changed so much because of online ticketing. However, in the future, they will be able to design a more modular counter that can be moved or taken down, depending on traffic flow in an airport. They will also be able to incorporate biometric technology to check passengers in even faster.

Another area that must be completely overhauled in the coming years is baggage handling. The digital economy has made us grow accustomed to sending and receiving more things across the globe; it’s not unthinkable that we will be more and more comfortable with sending our suitcases ahead to our destinations before we even set foot in an airport. When combined with the advancements in 3-D printing, which will allow us to print all sorts of things quickly, this suggests that airports may be filled with passengers without suitcases in the future, which will, in turn, allow for greater mobility and more shopping, leisure, and dining opportunities.

For those who would still prefer to travel with their luggage, technology and more information exchange between airlines and airports will allow them to continually monitor where their suitcases are, even during the flight. Technology will also make transporting suitcases within terminals easier by using robots. This will also make delivery service straight to our hotels or homes much more affordable and accessible. This could open new commercial avenues for the airport, as it would be able to allocate part of the baggage claim area to spaces for advertisers and tourism agencies.

As for the terminals of the future, this experience will be defined by clear, intuitive signage; designs that reduce walking distances or shorten them with self-driving vehicles (among increasingly older populations, airports will be filled with passengers who require assistance); and the introduction of technologies such as facial recognition, which will better enable us to study user behaviors.

In shopping areas, we will see more local brands instead of the same multinational brands at every airport, as well as a more flexible, dynamic selection of products thanks to passenger behavior monitoring. E-commerce shouldn’t be seen as a competitor for commercial activity at the airport, but instead, as an opportunity for brands to take advantage of the time passengers spend waiting to offer them a differential experience as both current and potential customers.

Finally, we will touch on security. These measures will actually begin before we even get to the airport, or at least less intrusive, consistent processes. These include installing metal detectors throughout the terminal so that they are not only used at designated checkpoints, as well as installing cameras capable of detecting suspicious behavior.

Employees, airlines, and local communities: three key stakeholders both now and in the future

Even if putting the focus on the passenger is key for the airports of the future, this doesn’t mean that other key stakeholders should be forgotten; on the other hand, employees, airlines, and local communities must be considered.

In terms of managing teams, providing job security will continue to be key. It will also be increasingly important to provide ongoing training to adapt various roles to changing passenger demands. And not for nothing: an airport with virtual guides, robots, or an interactive app will require less personnel to perform the tasks of processing passengers. That staff will have to be used to carry out other roles with greater added value, something which, in many cases, will be attained by setting up academies or training centers with specialized programs for the airports themselves.

As far as airlines go, their future relationship with airports will primarily be through the automation. These automated processes include everything from aircraft routes once on the runway, which can be carried out remotely, to general self-driving vehicles and boarding bridges, along with the remote control towers that some airports are already testing.

Advances in aircraft design will require still more collaboration between airports, airlines, and manufacturers. This can be seen, for instance, in the possibility of some models folding up their wings to take up less space will have significant implications for the design of terminals, boarding gates, etc.

Finally, the airports of the future will have to pay twice the attention to their local communities, which will include expanded advisory committees that will enable establishing those same solid, recurring bridges in communication. It is also to be expected that airports will increasingly hire more local staff to contribute to economic and social development in their areas of operation. As such, they will have to get more and more involved in their training, even working with existing schools, institutes, and universities or with their own learning programs and employee academies.

A good relationship with local communities will also mean mitigating the side effects of airport activity. This means that airports will become more and more involved in research on developing quieter aircraft that run on sustainable fuels. Electric fleets will become more widespread, and projects to reduce plastic consumption and promote more biodiversity will grow around them. Heathrow Airport is a major force behind more sustainable aviation, as its ambitious sustainability plan, Heathrow 2.0, shows, thanks to which it has already managed to become a carbon-neutral airport. It aims to eliminate emissions completely before mid-2030. 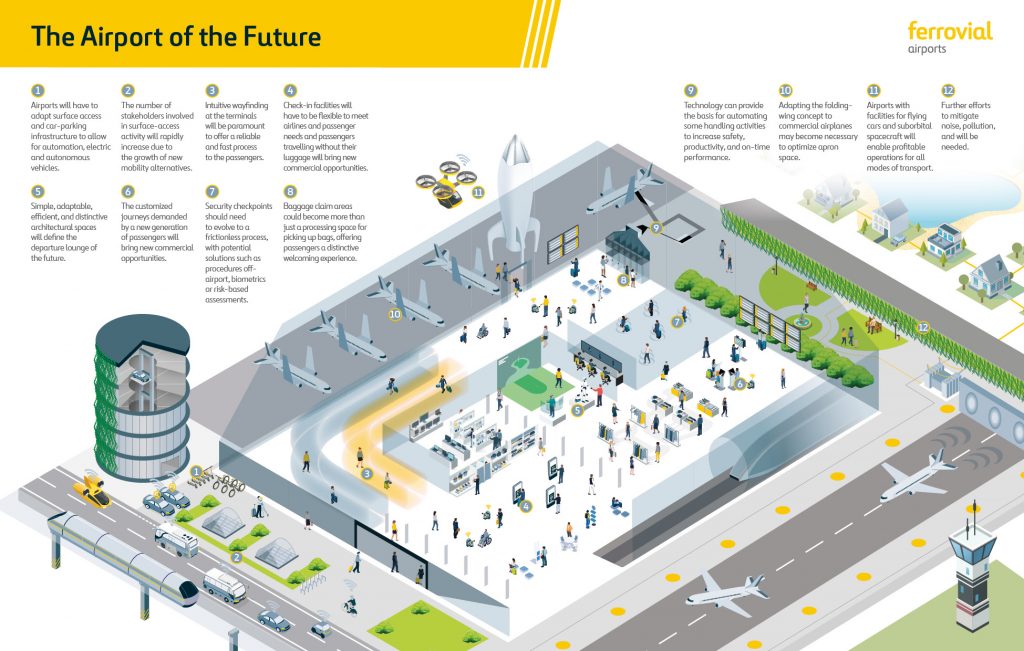