Earthen construction is one of humanity’s oldest construction methods, found all across the globe. From the earliest civilizations, people have found ways to build with local materials mixed into a mud or clay composite. From the Ziggurat of Ur to portions of China’s Great Wall to Joya de Cerén, a preserved village in El Salvador dating back to 900 B.C.E., the varied techniques of earthen construction have reflected the locations and cultures in which they were used.

Bousillage, an earthen building technique using soil mixed with fibers as wall infill, is a construction method found in throughout areas that had been colonized by the French.

Bousillage, as it evolved in colonial Louisiana, is defined by professors Laura Ewen Blokker and Heather A. Knight, as earthen construction that “utilizes a mixture of tempered earth and Spanish moss (Tillandsia usneoides) applied as infill over staves between the posts of a timber-frame (colombage) structure.” 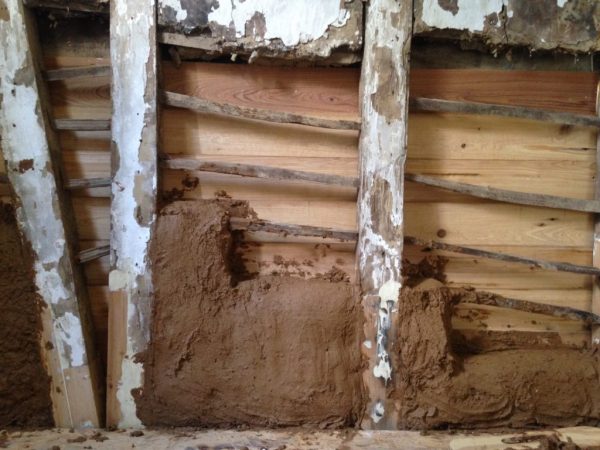 In its incarnation as a technique specific to Louisiana, bousillage perfectly manifests in construction the creolization of the cultures that mixed there dating from the late 18th century. While soil-based construction exists everywhere, the combination of Native American, French Acadian, and West African cultures present in colonial Louisiana resulted in a local bousillage technique and history not found anywhere else in the world.

And while bousillage is long out of use as a major construction method, local experts continue to innovate with the method as part of restoration projects for Louisiana’s many remaining buildings constructed with bousillage walls.

The condensed story of the development of bousillage in Louisiana

When the French Acadians were expelled from Nova Scotia, many relocated to the newly French-controlled territory: colonial Louisiana. The Acadians brought their bousillage technique with them, including their expertise in woodworking and approach to timber framing structures.

They noticed that Native Americans, who built with earthen construction methods of their own, used a pervasive local plant – Spanish moss – in their mix. Part of earthen construction’s appeal is how easily available the necessary materials are. Having seen how Native Americans used the plant, the Acadians began using it in their earthen mixtures as well. Indeed, the use of Spanish moss as the fiber that strengthens and binds the infill material is one of bousillage’s singular aspects.

According to Blokker’s and Knight’s research, bousillage has been used in Louisiana since 1700 and continued as a common construction method through the early twentieth century. The longevity of the method’s use is part of bousillage’s noteworthiness in Louisiana architectural and cultural history. Other forms of bousillage are documented elsewhere in North America and the Caribbean. However, it was only sparsely used outside of Louisiana and then only for a short period of time.

Bousillage may have remained popular in Louisiana, in part, due to its thermal properties that kept interiors cool and dry in the summer and warm in the winter. The sturdiness of bousillage walls may also have been considered advantageous in weathering the area’s hurricanes and storms. Furthermore, typical Creole architectural style was to build a brick rez de chaussée (ground floor) and use bousillage for the walls on the premiere étage (first floor). This pattern kept the bousillage walls off the ground, allowing air to circulate below them and protecting them from flooding. 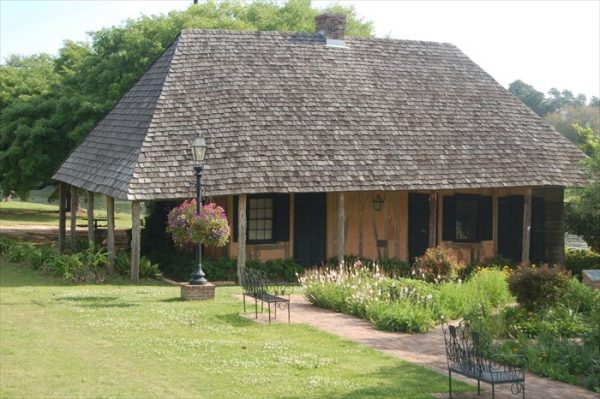 The Roque House stands as one of the oldest remaining buildings with bousillage walls on the ground floor. Dated to 1803, the Roque House is a one-story cottage built by a formerly enslaved man named Yves. He built the home along the Cane River in Natchitoches Parish, using cypress timbers and bousillage infill. The cottage has since been moved to downtown Natchitoches, still along the Cane River. It was restored by the Natchitoches Historic Foundation, although some portions were destroyed during the move. The Prudhomme-Roquier House (1806), also in Natchitoches, is unusual because it uses bousillage walls both on its ground and first floor. 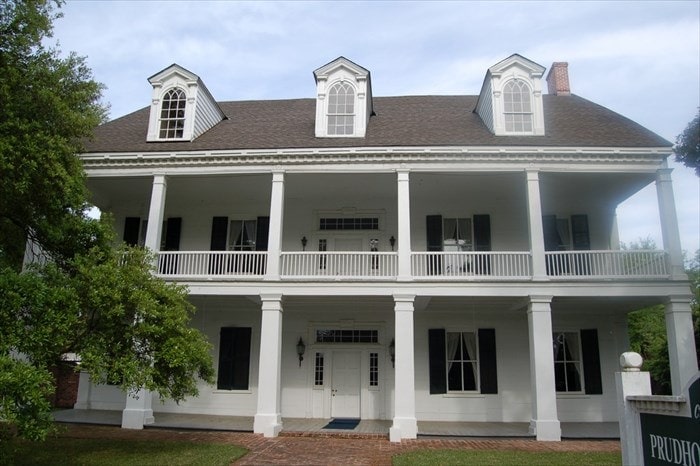 Blokker and Knight suggest that the longevity of bousillage may also be attributed to the presence of West Africans and their descendants in the area, who “dominated the building trades since the early eighteenth century.” As a similar earthen building technique, wattle and daub, was common in West Africa, the professors suggest that their cultural familiarity with earthen construction “may have added to the prolonged popularity of bousillage in Louisiana.”

Natchitoches Parish, in central Louisiana, is today’s epicenter of extant bousillage buildings. In addition to the Roque and Prudhomme-Roquier houses, you can visit numerous other examples of bousillage construction. 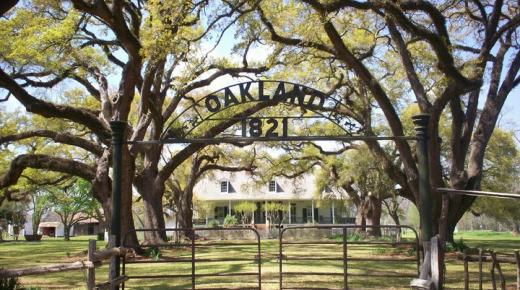 The Oakland Plantation in Natchitoches Parish, was built in the late eighteenth century. It has the most structures with bousillage construction on a single property, from the Main House to tenant cabins to storehouses. The Main House on nearby Melrose Plantation, built in 1832, follows the typical Creole-style of a brick rez de chaussée and bousillage on the premiere étage.

Outside of Natchitoches you can find one of the largest, restoration projects involving bousillage. Kleinpeter House, in Baton Rouge Parish, is a 200-year-old house that remains in the hands of the family that built it. It exhibits many characteristics of classical Creole architecture, such as hall-less asymmetrical floor plan and bousillage walls.

Having fallen into serious disrepair, Kleinpeter House went through a two-year restoration project starting in 2015. Conducting a historically authentic restoration meant finding someone with expertise in bousillage. The restoration firm working on the house, Staub Window Restoration (SWR), found Dale Pierrottie, a local bousillage expert. To restore the bousillage walls in the house, Pierrottie and a team from SWR had to mix and shape new torchis, the loaf-like mud sections that get wrapped around the wood slats placed between the wood staves.

One of the challenges in bousillage restoration is creating the right blend of mud and Spanish moss. The contemporary wisdom holds that the Spanish moss needs to be cured before getting mixed with mud. Based on their research, which included both qualitative analysis of old bousillage samples from around the state and review of historical accounts, Blokker and Knight contend that curing was likely not part of early bousillage.

Yet their interviews with contemporary bousillage practitioners, including Pierrottie, revealed that all felt that cured Spanish moss improves the quality of the infill mixture. As bousillage was used for so long, it’s easy to believe that it went through some innovations over time. Older methods of curing involved burying Spanish moss it pits for extended periods of time. That wasn’t an option for a 21st century restoration project. Instead, Pierrottie has a method of boiling the Spanish moss to prepare it quickly for mixture. 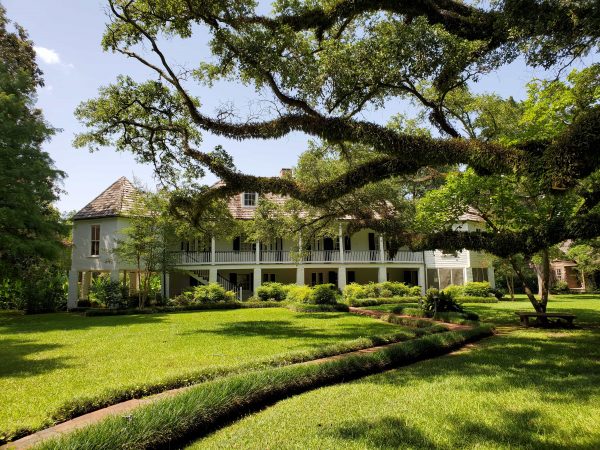 “Bousillage is an intricate process. Dale had to keep tabs on if there was enough or not enough water, moss, or mud while mixing the materials. The ratio matters greatly when making the torchis that get placed over the barreaux; too wet and it will not stick together or too dry and the wall will not cure correctly.”

Another major challenge was how physically demanding the work is to prepare and place the torchis. Combining the mud and Spanish moss into the right consistency requires stomping the mixture – think of stomping on grapes to make wine – but goopier and with more resistance. Then there’s the labor to carry the large and heavy torchis to the walls for installation.

These are all challenges that make bousillage restoration cost-prohibitive, especially as part of private restoration projects. The Historic Preservation Trade Center trains people to keep the bousillage knowledge alive, but they work on publicly-owned structures.

Fortunately, bousillage is finding a growing network of support encompassing public and private, organizational and individual, academic and commercial spheres that will keep this curious and particular construction method part of Louisiana’s landscape.