The World Abounds with Thanksgiving Traditions

In the United States, Thanksgiving 2020 is here. It’s been a challenging year. Many of us work through it by finding reasons to be thankful – a common human instinct for persevering through trying times. Thus, this thanksgiving holiday season is a particularly ripe opportunity to dig deeper into gratitude by taking a look at how different cultures have developed their own thanksgiving traditions.

It’s Only Partly About the Food

The origin story for the American Thanksgiving dates to 1621 when Pilgrims feasted with the Wampanoag tribe to celebrate a bountiful harvest. While the life-saving harvest was the impetus for the thanksgiving in 1621, a broader look at the development of North American thanksgiving traditions shows they run broader than a harvest celebration.

The earliest documented colonial thanksgiving in North America was observed by Spanish explorers arriving at what today is St. Augustine, Florida in 1565. Another group of Spanish explorers held a thanksgiving festival in 1598 after reaching the Rio Grande in what is now Texas, after forging a new crossing through the Chihuahuan Desert. In both cases, feasts and prayers were held to express gratitude for surviving a dangerous journey.

Anglo settlers also held special thanksgiving days prior to 1621. They brought this tradition with them from England and Scotland where days were often set aside as days for Christian celebrations of gratitude after a national victory or achievement. George Washington proclaimed a national day of thanksgiving in 1789 to give thanks to “that great and glorious Being”  both for the national tranquility enjoyed since the Revolutionary War ended and “for the peaceable and rational manner, in which we have been enabled to establish constitutions of government for our safety and happiness…”

Thanksgiving was made an official U.S. federal holiday by Abraham Lincoln in his 1863 Thanksgiving Proclamation. In that proclamation, Lincoln itemized a long list of reasons why Americans should be grateful. Some dealt with the abundance of natural resources and others were about the advances of the Union forces and expanding freedom. Lincoln looked forward as much as backward. His proclamation included a plea that Americans “fervently implore the interposition of the Almighty Hand to heal the wounds of the nation and to restore it as soon as may be consistent with the Divine purposes to the full enjoyment of peace, harmony, tranquility and Union.”

The early Canadian thanksgiving celebrations followed a similar pattern of celebrating triumph over adversity. The earliest documented thanksgiving in modern Canada was held by English explorer Sir Martin Frobisher and his ship’s crew in 1578. They didn’t have food for a feast but designated a day of prayer in thanks for navigating safely through the eastern Arctic to Nunavut. In 1606, a great feast was had celebrating the return of French settler Jean de Biencourt de Poutrincourt from a dangerous expedition. The Canadian parliament fixed a date for the annual Thanksgiving holiday in 1957, the second Monday of October. Prior to that, the official Thanksgiving Day was set annually, often in reaction to specific events of that year, such as combining it with Armistice Day after World War I.

For the Ga people in Ghana, conquering hunger was the victory, similar to the Pilgrims’ feast in 1621. The Ga celebrate Homowo, a long festival during which they hold celebrations showing gratitude for the harvest and their triumph over famine. In the Ga language, homowo loosely means “to taunt hunger.” It’s also been translated as to ridicule or laugh at hunger. 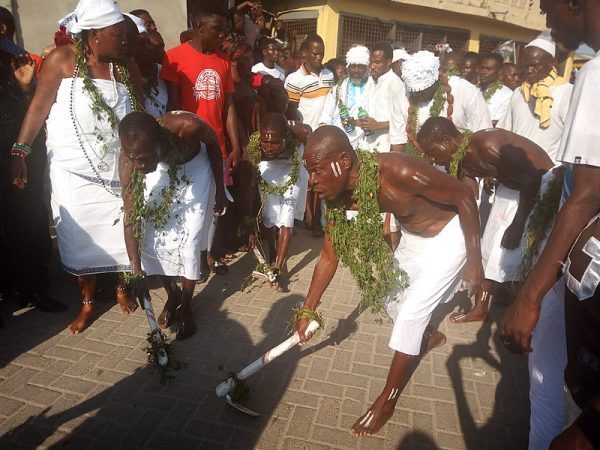 The origins of Homowo go back hundreds of years to when the Ga migrated to Ghana. The story tells of a great famine they suffered. Despite the hunger, the people poured out libations as a religious plea for a plentiful crop. Libations were offered to Ataa-Naa Nyonmo, the supreme creator and various DzemaWodzi, lesser gods of the sky, earth, and ocean. A great rainfall followed, resulting in a copious harvest. Libations were poured again, this time in gratitude. Today, the harvest is celebrated with feasts and religious rituals that take an accounting of people’s actions from the previous year and offer prayers for future prosperity. Homowo falls during August or September, with towns having their own schedule of celebrations.

The week-long festival of Sukkot remembers both a defining national event and rejoices in a full harvest. The holiday is established in the book of Leviticus and observed in Israel. One purpose of the holiday is to express gratitude to God for the Israelites’ redemption from slavery and protection through 40 years wandering the desert. The holiday also celebrates the fruit of the land of Israel, represented by the Four Species: A palm branch surrounded with myrtle and willow branches, called a lulav, and an etrog, a citrus fruit.

Sukkot is called “The Festival of Booths” and “The Feast of the Tabernacle” in English, reflecting its dual themes. The Hebrew word sukkah means booth, which is another symbol of the festival. Families build a small, temporary hut outside their homes, which they decorate with fruits, vegetables, and flora. The sukkah has a thatched roof through which the sky and stars can be seen. It represents the temporary lodgings used by the Israelites wandering through the desert and by farmers during the harvest. Its transience is symbolic of humanity’s vulnerability and a reminder to have gratitude for sustenance and protection. The festival is observed in the fall, as an autumn harvest holiday, and begins a period during which Jews include daily prayers for rain for an abundant spring harvest.

Sometimes It Is Mostly About the Food

The COVID-19-inspired runs on grocery stores reminded many of us that easy access to food is not a given. That fact was evident to everyone when the world was an agrarian society. It would probably be more difficult to evidence of an agrarian culture or people that didn’t have a celebratory feast when the harvest came in. One such harvest festival without a specific origin story is the Pongal festival celebrated by the Tamil. Pongal occurs at the start of the holiest month of the Tamil calendar month Thai, which falls across January and February. The four-day festival celebrates the harvest and honors the Hindu sun god Surya, source of all life.

Pongal means “to boil” in Tamil and is also the name of a boiled rice dish eaten during the festival. One of the festival’s central events is cooking pongal with newly harvested rice until it boils over the pot. When the pongal begins overflowing, the family celebrates it as a symbol of abundance. 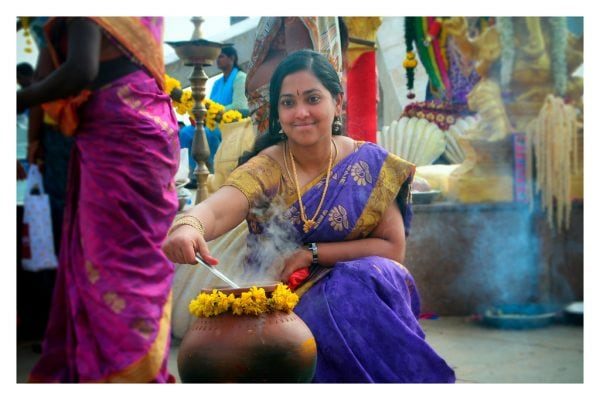 “Happy Pongal Wishes” by Nithi clicks is licensed under CC BY 2.0

While the exact source of the holiday is unknown, there of records of it dating back to the Sangam Age (200 BCE – 300 CE). Each of the four days has its specific rituals. The entire festival traverses arcs of disposal and renewal and familial to communal, and is girded with religious observances of gratitude and hope. One of the rituals is creating kolams, bright, colorful, temporary decorations made of rice flour or other powder. The Pongol Festival is celebrated in the Indian state of Tamil Nadu and in other countries with large Tamil communities. 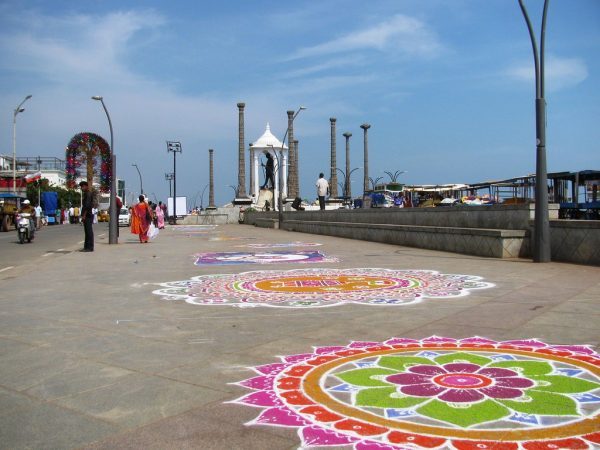 “Promenade on Pongal Festival” by wandering architect is licensed under CC BY 2.0

The History of Thanksgiving is Universal

The origin stories and rituals may vary wildly, but the thanksgiving holidays share common themes. Themes of gratitude to a higher power for perseverance and the receiving of blessings, along with prayers for an abundant future. These are universal human values that give meaning of many to thanksgiving holidays around world and create common bonds among us.