Is New Mobility the ultimate solution to excessive traffic and traffic jams? And, if so, is the toll road industry in danger?

Technological development is changing global mobility at an unprecedented rate and promises  our lives. But is this theory true? Is our business model in danger?

In order to understand this, we take real data and the latest research to expose four common myths used by advocates of the so-called “new mobility”, who claim for this concept to be the solution to all traffic problems.

This article is the second part of the one published in the previous edition of Cintra Route, which proved how Myth #1 Crowdsourcing doesn’t contribute to the reduction but to the increase of traffic levels and traffic jams and also how Myth #2 Remote Working has several side effects besides the reduction of peak-hour traffic, which needs to be analyzed in detail to understand its net effect on traffic levels.

In this article, we will analyze two additional myths related to the “new mobility”: #3 E-Commerce and #4 Electric, Connected and Autonomous Cars.

From 2014 to 2019, e-commerce sales ratios nearly tripled globally. The COVID-19 pandemic is further accelerating this trend due to the mobility restrictions implemented by governments worldwide. At the end of 2019, only around 13 percent of retail purchases in the US were made online, according to Mastercard. By the end of 2020, that figure stands at around 20 percent for a growth close to 30% year on year. Amazon, unsurprisingly, was the big winner of this dramatic shift, growing its US retail business an estimated 39 percent. 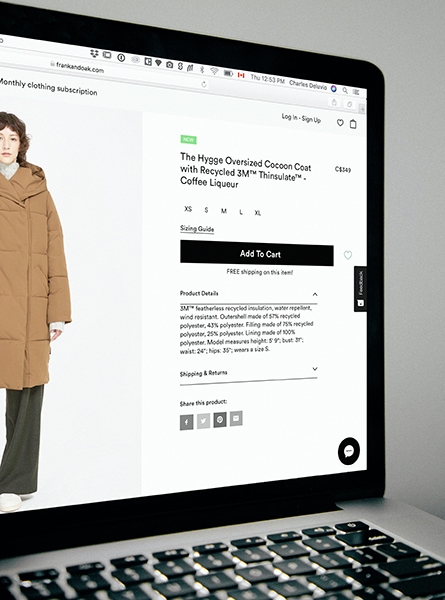 In terms of its effects on traffic trends, many studies in the mid-2000s argued that online shopping would drastically reduce car traffic by eliminating personal shopping trips. However, this theory has proven to be inaccurate since the extraordinary growth of e-commerce in the last decade hasn’t been linked to a significant reduction in shopping trips made by car. In fact, the primary effect due to the surge of online shopping has been the increase of delivery trips, with negative effects on congestion, particularly in dense urban areas.

This is due to several reasons, including the growth of individual purchases as a consequence of e-commerce convenience. In other words, by making shopping easier, quicker and often cheaper, e-commerce does not only replace brick-and-mortar purchases, but it deconsolidates purchases, increases total sales and, consequently, shopping-related traffic – which is made of both personal and delivery trips.

Secondly, even when e-commerce replaces shopping trips made by car, the impact on congestion can be negative. This is because shopping trips mainly occur in off-peak hours and during the weekend, while delivery vehicles operate throughout the whole day, especially on weekdays. In addition, delivery vehicles are generally larger than the average car and make multiples stops in densely populated areas, which leads to more congestion.

Finally, the growing difficulty to group deliveries to different customers – due to the increasing availability of express delivery options – and the extra trips associated to failed deliveries and returns contribute to the increase of shopping-related traffic and traffic jams.

E-commerce is a contributing factor to the increase of traffic congestion. Indeed, the limited reduction of shopping trips by car in off-peak periods is overcompensated by the extraordinary growth of delivery trips –particularly on weekdays.

Electric, Connected and Autonomous cars will reduce traffic jams thanks to smart driving and traffic coordination provided by vehicle automation and connection…TO BE CONFIRMED, BUT MOST LIKELY FAKE

Autonomous and connected driving is expected to optimize traffic flows with significant benefits in terms of network capacity, as vehicles would drive more safely and closer to each other. Some argue that full automation and connection will even allow to get rid of traffic lights at intersections – as vehicles will communicate and coordinate without the need of traffic signals. However, this scenario requires several conditions which are very difficult to achieve, as explained below.

First of all, to achieve some of the aforementioned benefits, a significant portion of the vehicle fleet – at least 50% according to several experts – should be autonomous, connected or able to circulate in a coordinated way. Based on the current developments in technology and in the regulatory framework, as well as the likely high costs, such penetration is not expected to be reached in the near future. As an example, S&P forecasts a penetration between 5% and 35% in the U.S. by 2040. 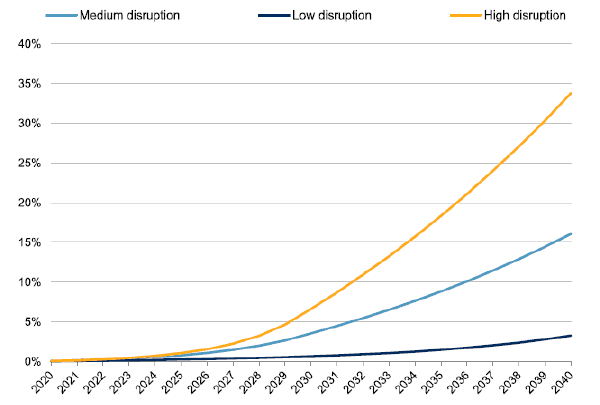 Even under the “100% Connected and Autonomous Vehicles’ (CAVs) penetration” scenario, the increase in road network capacity is likely to be limited by a number of safety constraints – e.g. interactions with cyclists and pedestrians in urban areas – and comfort standards, which for example won’t allow travelling at very high speeds or performing abrupt accelerations/brakes.

A second aspect to take into account is the impact of this new technology on traffic volumes: some studies forecast a 30% increase in road network capacity thanks to the proximity between vehicles – also called “platooning” – and the dramatic reduction of accidents’ rate provided by vehicle connection and automation. However, these estimates often ignore the likely effect on overall traffic in a scenario in which all vehicles are electric, autonomous and connected with each other.

Additionally, the convenience of travelling by car over public transport, walking and cycling will become higher than today – therefore contributing to overall traffic increases. This is mainly due to the increased comfort provided by vehicle connectivity and automation, and to the lower cost per km guaranteed by electric driving.

Several studies predict that this additional traffic will exceed the expected increase in road network capacity. To cope with this gap and manage the demand in excess, new mobility measures, technologies and regulations will need to be implemented, and significant investments in physical and digital transport infrastructure will be required.

Another relevant question is: what will happen in the transition until such a futuristic scenario of full autonomy becomes the new reality? The most likely answer is that there will be a long period of mixed technologies in which car traffic will grow due to the increasing CAVs’ convenience, comfort and price competitiveness. On the other hand, the presence of a relevant proportion of manually driven vehicles – whose driving behaviors will remain more erratic and opportunistic (human) – will make it difficult to extract the capacity benefits that this new technology can offer.

In light of all this, we believe that connected and autonomous vehicles do not represent so much a risk as an opportunity to attract the expected additional demand by developing state-of-the-art infrastructure and provide a better and safer service to our users.

Electric, Connected and Autonomous vehicles are expected to add trips to our roads by providing a wider access to car, generating empty trips and increasing car convenience over alternative mobility options. The expected long transition period during which autonomous and conventional vehicles will coexist will see traffic increases but also friction that will preclude the development of the potential capacity optimizations offered by this technology – likely resulting in higher congestion levels in the foreseeable future.

In short, what is Cintra’s opinion on the joint effect of the four trends described in the two articles discussing the “new mobility”?

Many of the arguments adopted by the advocates of the ‘new mobility’ – which claim that it is the ultimate solution to congestion problems – don´t look like they are based on evidence and are sometimes biased towards an unjustified optimism.

The traffic reduction triggered by the increase adoption of remote work – which the COVID-19 pandemic has accelerated significantly– is likely to be more limited than what is generally expected. This is due to secondary effects such as the possible increase of non-work-related trips and urban sprawl – which need to be investigated in further detail.

E-commerce delivery traffic is expected to keep increasing as a consequence of the continuous growth of online shopping and express delivery options, putting even more pressure on the road network.

Finally, the increasing availability of mobility options such as car-sharing and ride-hailing, the lower cost per km provided by electric cars and, in the future, the higher comfort offered by CAVs, will arguably contribute to a higher adoption of cars over public transport, walking or cycling. This will inevitably result in an increase in car traffic and traffic jams – particularly in urban areas.

In conclusion, it is likely that once the COVID-19 pandemic is behind us and the economy is back on track, the combined effect of these new mobility trends will result in an increase in traffic on our roads. Within this framework, Cintra´s assets may enjoy a larger, yet different, demand. Cintra will also play a key role both as a developer of new infrastructure and as an orchestrator that optimizes the capacity of existing infrastructure and efficiently manages the future demand for mobility.