Before the opening of the Toowoomba Second Range Crossing (TSRC) in September 2019, thousands of vehicles – many of them heavy trucks and Aussie-style road trains – would chug and rumble through the middle of Toowoomba each day.

Each car and lorry would pass through around 16 sets of traffic lights in this city of 130,000 people, which sits on the crest of the Great Dividing Range, 700m above sea level.

Naturally, the need for a bypass had been talked about for many years. So our project was almost universally welcomed by the local community from the very beginning.

Most of us who worked on the project chose to live in Toowoomba for the duration – we were embraced by the community. I met my wife while working on the TSRC and we had three children while living in the city – so I have great memories of my time there.

The new road has greatly improved liveability in Toowoomba. The local economy was boosted by very high rates of local employment and upskilling. The roads around the city are now much safer.

The project has also benefited Australia’s wider economy by enhancing the freight and export network and reducing travel times by up to 40 minutes.

A road for future generations

The TSRC is a 41km, four-lane route to the north of Toowoomba. It was a complex project with many impressive and robust engineering design features. Construction was innovative and well-managed – it needed to be to overcome the steep terrain and geological challenges and to sustainably build a road that would last for generations.

It incorporates 30 major bridges along its route. One of the most important is the New England Highway Overpass Twin Arch Bridge at Mount Kynoch.

Finding the best way for these two major transport arteries to intersect was vital to the success of the whole project.

Central to the solution was the decision to permanently realign the NEH just west of previously existing route and smart planning of the bridge to allow the TSRC to be built without interrupting traffic flow. 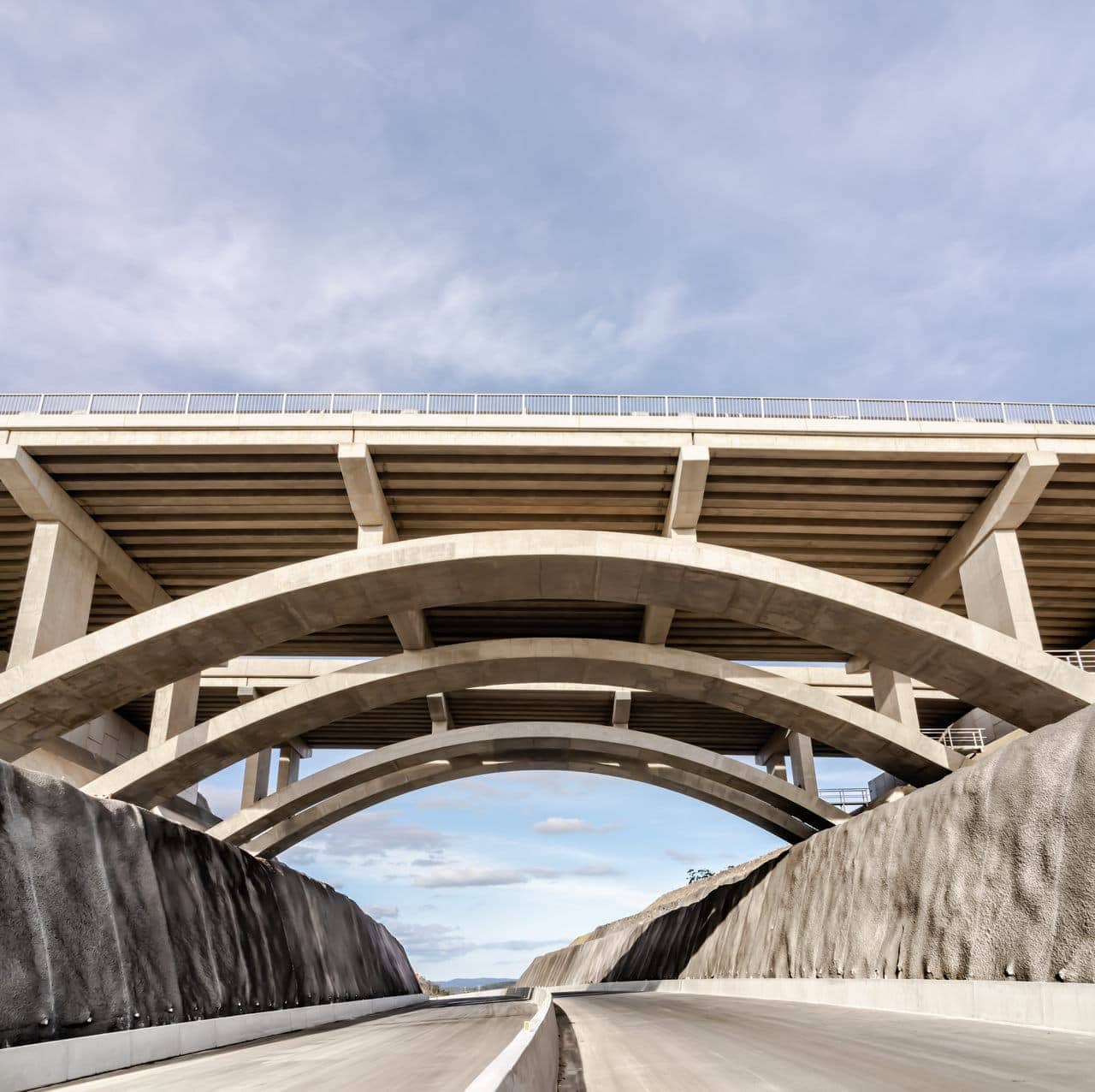 The bridge did not require the large amounts of steel and timber scaffolding and other equipment usually required for traditional ‘bottom-up’ designs.

Carbon levels remained steady, unaffected by the longer travel times that would have been caused by traffic jams due to construction and closures on the NEH.

The concrete construction required no painting or additional embellishment. All concrete elements were sourced locally, reducing the long-distance supply chain and benefitting the area’s economy by using local suppliers and tradespeople.

Importantly, the bridge’s shared-use footpath and cyclepath have improved access to Toowoomba from the northern suburbs, encouraging a healthier lifestyle and less reliance on road travel.

Blast from the past

To construct the arches, existing ground was cut to an initial excavation line that coincided with the bottom of the arch footings – significant thrust blocks constructed in the rock face.

Construction of an earth mound, conforming to the profile of the arch soffit, became the formwork for arch construction. This proved a more economic and far safer construction methodology than a fully excavated platform requiring massive amounts of scaffolding.

With arches complete, columns were constructed, and headstocks and precast deck units were erected before an in situ concrete deck slab completed the main structure.

Only then was traffic diverted onto the realigned highway. The remaining excavation required a degree of controlled, state of the art blasting under the bridge, creating an exciting experience for road users.

Cheaper and less restrictive than a tunnel

Selecting an under-road arched bridge design has had many positive impacts. There are no restrictions on heavy traffic, dangerous goods or high vehicle use that come with a tunnel. Every kind of truck can pass under the bridge.

There were not great differences in the costs of constructing a bridge as opposed to a tunnel, but there will be huge savings in ongoing maintenance costs, without any need for ventilation and lighting. We believe we won this contract, in part, by proposing this iconic bridge as an alternative. 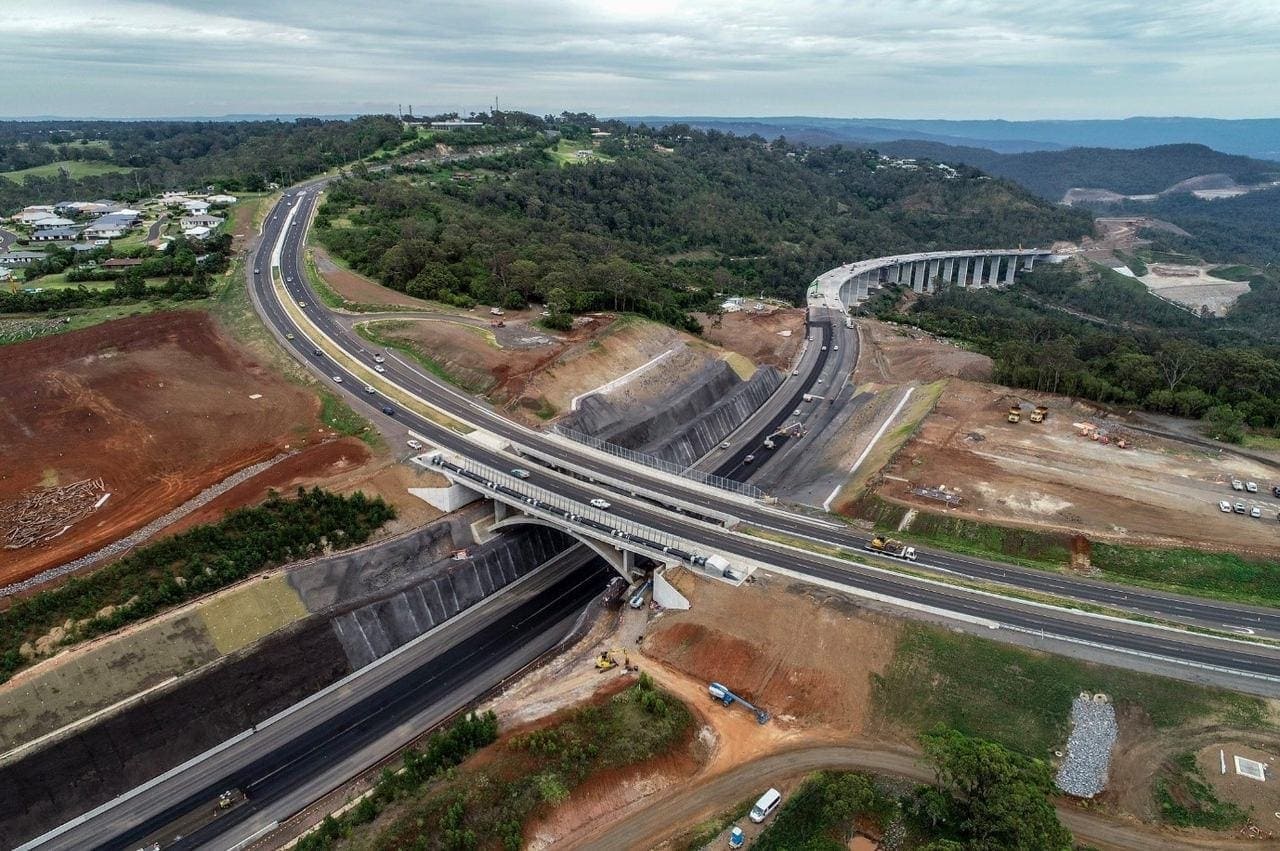 Gateway to the city

The twin arch bridge is cleverly designed to complement the majestic surrounding landscape.

Future plans include a viewing platform to capitalise on the aesthetic value of the structure and position it as an iconic tourist attraction – the ‘Gateway to Toowoomba’.

The project was challenging and required no little perseverance and commitment, but it has been undeniably successful at every level. Everyone involved in making it happen – from the chief engineer and project director to the citizens of Toowoomba who worked with us all the way – should be rightly very proud.

The $1.6 Toowoomba Second Range Crossing billion project was jointly funded by the Australian and Queensland governments. It was designed and built by Nexus Delivery, the Construction Joint Venture of Nexus Infrastructure which consists of Acciona Infrastructure Australia and Ferrovial.