The Map of the Madrid Metro: Design and Utility for Every Age

When the Madrid Metro opened in 1919, its layout was limited to a single line and eight stations. So that winding curve between Sol and Cuatro Caminos, which had a few points highlighted with station names, can technically be considered the first layout of the Madrid Metro.

From there, it’s grown to 317 stations and 12 lines, a task that has required significant human effort and construction, as well as signage and design. This has been perfectly condensed in the iconic Metro map that travelers can consult on informational panels, brochures, or online.

The charm of Metro maps

For some strange reason, the design of the Metro blueprints is a pastime, and even an obsession, for many people, especially those who enjoy artistic subjects. It’s important because millions of people living in cities use this mode of transit every day. It’s part of the Metro’s image, and it is more than its usefulness: it illustrates part of the city’s identity, an icon best crystallized in the map. 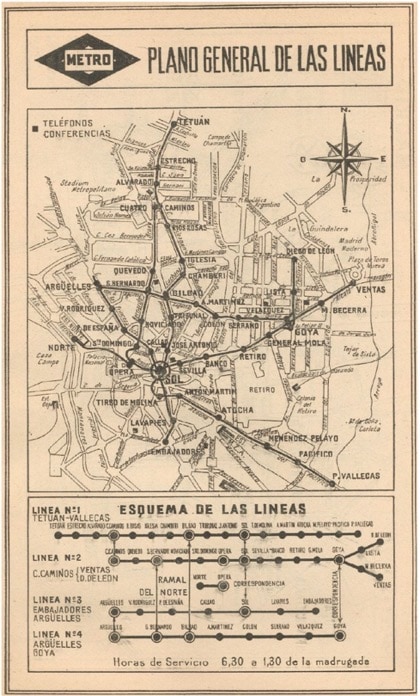 From another perspective, a Metro map is also like a sort of puzzle where it’s not easy to fit all the pieces and details together. It has to represent where the lines and stations are located across the city’s familiar landscape. However, they also have to be simplified, boiled down to a schematic model without many superfluous elements. This is why there are almost always two versions of these representations: the geographical maps and the schematic layouts of the Metro.

The evolution of the design of the Metro’s layout

Deciding between the two typical versions of the Metro layout is no small choice because each has its own advantages:

It was the legendary British designer Harry Beck who decided to adapt the original geographical map of the London Underground to the schematic version in 1933, putting lines and stations in a grid-like image. Vignelli would do the same for the New York Metro in 1972, using only straight lines, smooth curves, and disproportionate distances. This map is considered an icon of modernity, minimalism, and clarity; it is on display in the city’s Museum of Modern Art. But there was a plot twist: New Yorkers didn’t like it. So another geographical version was made in 1979, but the two forms coexisted in one way or another over the following decades. In 2020, the Work & Co studio offered to create a new digital map for the digital age for free: this geographical map has schematic details and changes as you zoom in on the image. 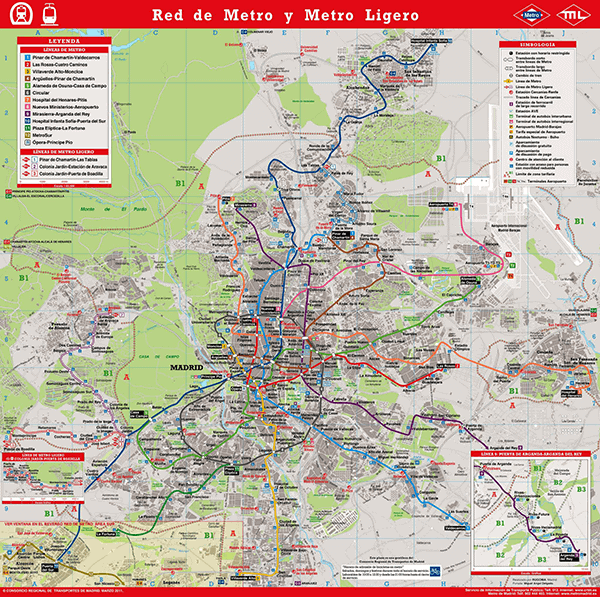 For the Madrid Metro, as the layout’s complexity increased, the basic map went to a geographical version shown over the street map of the heart of the city. It represented the location of stations and distances accurately, but it wasn’t easily readable. In documents from 1959, you can see how it had to be accompanied by a little diagram with the 4 lines that had been built by then, represented horizontally with vertical lines on the stations with connections.

The geographic/cartographic version used in the 1970s was the perfect version for many, with lines that were clearly visible on a clean map. It let you take in the layout of the entire Metro network next to the city’s iconic landmarks. This version still exists – and is regularly updated – on the main panels at every station, both at the entrance and on the platforms.

In December 1982, the Metro underwent a change in its corporate image, the image we still see today. The change in signage brought with it the Helvetic typography that is still used everywhere, as well as the custom colors defined for each Metro line (1, light blue; 2, red, etc.). New arrows, signs for the stairs, exits, and other icons and panels (blue for the lines, green for information, gray for supplementary info…) These have been used, with a few updates, ever since;  you can still see them in the metro to this day.

In 2001, Juan de la Mata‘s studio took up the task of creating a new schematic layout that’s been updated as the Metro expands. Perhaps the most well-known version of that layout is the brochure you can pick up at ticket booths. It is based on Harry Beck’s concepts for the London layout, aiming for functionality and legibility above all else. It also combines the best of both worlds: the simplicity of the schematic versions and the true-to-life distances and recognizable areas, such as river and parks, as well as practical iconography. 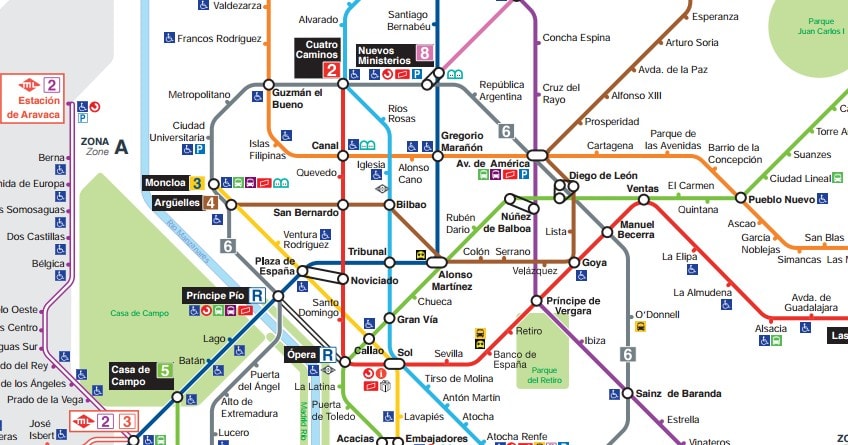 One of the most controversial changes took place in 2007: the schematic layout became “even more schematic” when the RaRo studio created a new map that seemed strange: there were no diagonal lines, it was harder to understand, and even a different font was used, not the font for the corporate image. It offered few pluses over the map everyone already knew, and it stirred a lot of upheaval among residents.

Finally, in 2011 and 2013, the traditional schematic layouts were brought back, first within the one published by the Regional Transport Consortium and then by the Madrid Metro itself. New icons were added for stations with elevators and handicapped accessibility, as well as for park-and-ride lots, the new Light Metro lines, connections with the suburbs, the Bibliometros (little libraries in stations), and management offices for the transit card.

Metro maps are available in different versions and can be downloaded from the Madrid Metro website in PDF format:

Map of the Madrid Metro

On the website for Madrid’s Regional Transport Consortium, you can also download PDF maps of the Metro network:

Schematic layouts of the rail networks in the Community of Madrid

In addition to these links, you can have a map on your smartphone via the Madrid Metro App, which is updated automatically and has information on wait times, the station closest to your current location, and a tool to find the best route between two stations. 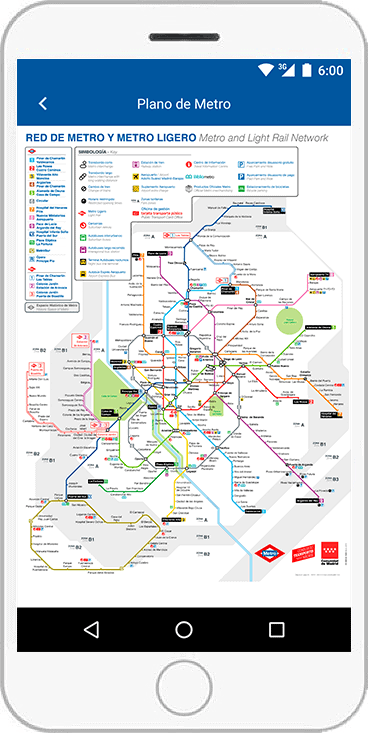 It also has the Tourist Map, which is ideal for those visiting the city: it has the most popular monuments and iconic places along with the lines and stops to get there.

A city’s metro map is a living document: it keeps growing, and you have to keep it alive by updating it as unforeseen events arise. The Madrid Metro’s extensions with areas like MetroSur or the Light Rail are good examples. We may see many more innovations in the future – not just extensions, but also in the types of transit and services added to the network.