Abandoned buildings that were architectural gems

Manor houses, grand palaces, resorts, and even spas. The world is full of buildings that, for one reason or another, were abandoned and left at the mercy of the passage of time.

Some of these buildings were actually once aesthetic icons or examples of innovation; even today, they continue to pique our curiosity. Some artists even find beauty in their decay and manage to use it to create works of art, such as photographer Reginald Van de Velde.

We’ll go over a few abandoned buildings that were once architectural gems or unique constructions: 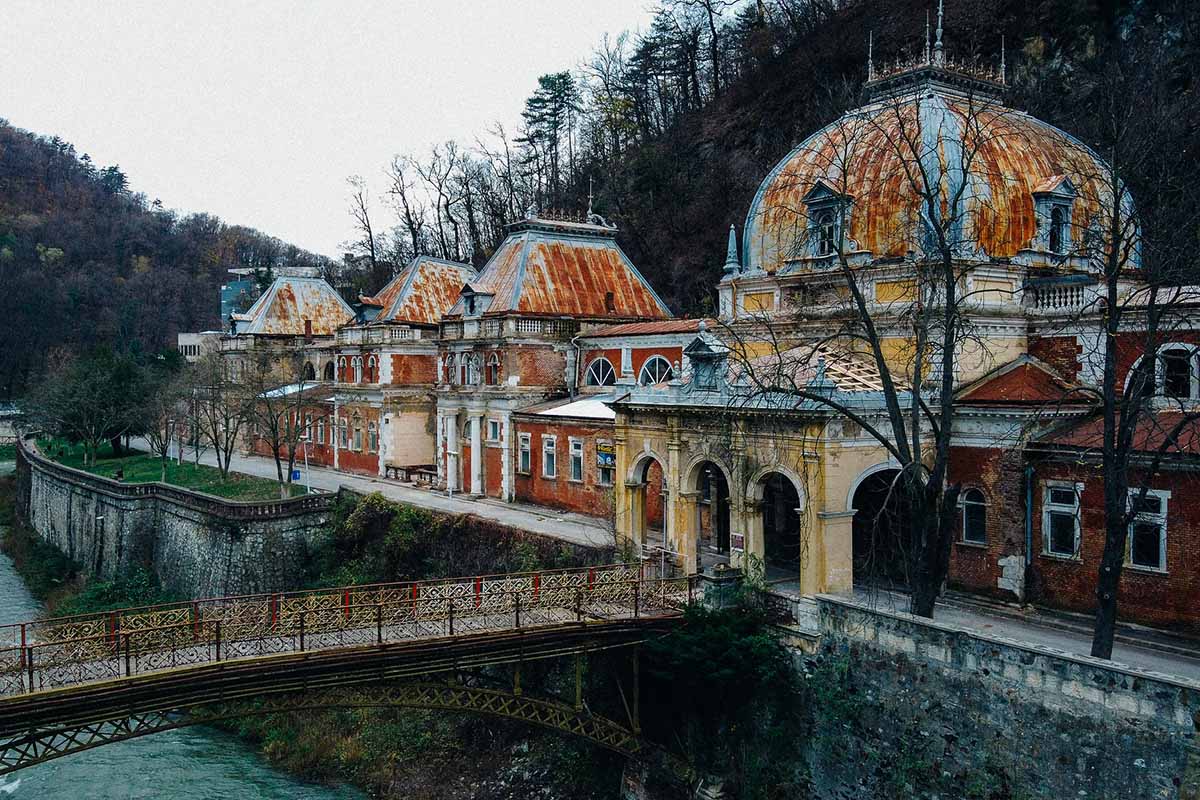 In southwest Romania, on the banks of the Cerna River, surrounded by mountains, is the city of Băile Herculane. Its hot springs got the attention of the Romans, who turned the area into a spa resort. The tradition continued, and all kinds of hotels and spas were built over the centuries.

One of the most impressive structures is the one known as the Neptune Baths, built between 1883 and 1886 with plans made by architect Alpár Ignat. The building, which spans more than 4000 square meters, has four large swimming pools and over 60 rooms.

For more than a century, it was frequented by travelers from all over Europe. However, after the fall of the communist regime in 1989, numerous facilities in Băile Herculane fell into oblivion. The Neptune Baths were abandoned, and the facilities began a slow process of deterioration that continues to this day. 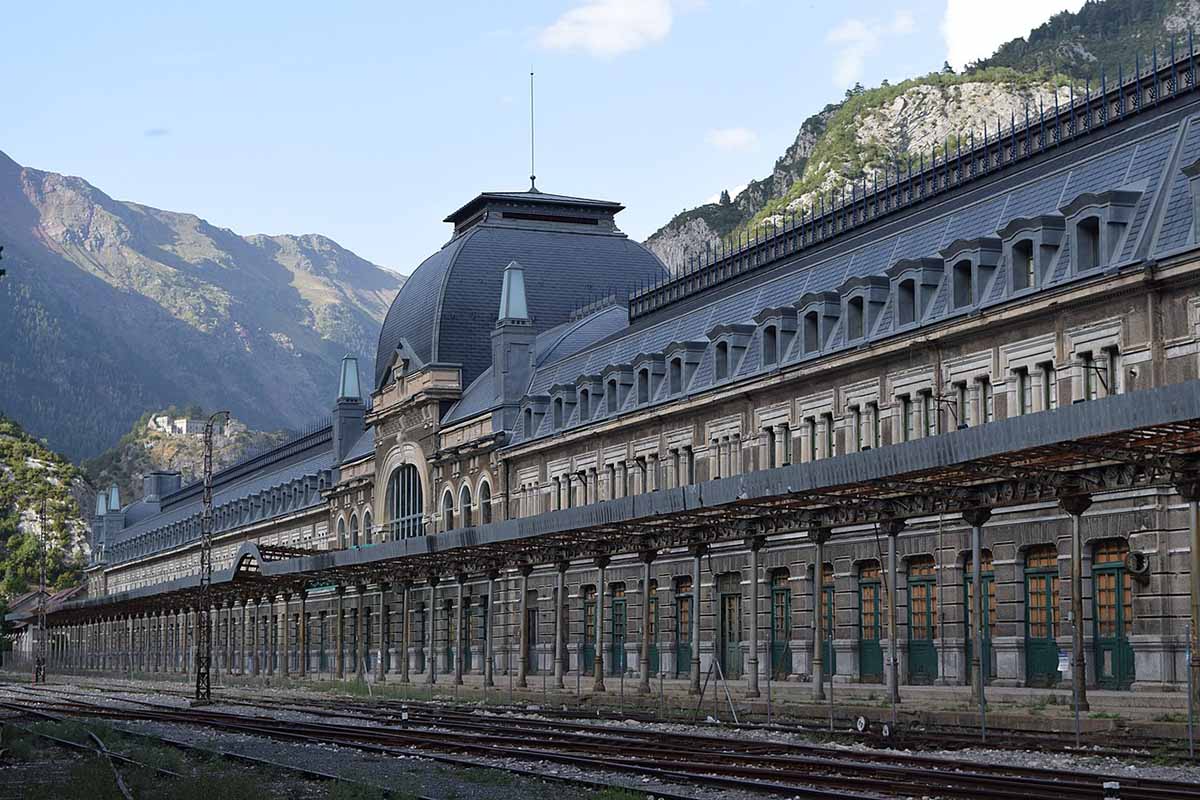 At the start of the last century, the governments of Spain and France embarked on a project to link the two countries by train through the Pyrenees. The Canfranc International Station (Huesca, Spain) was a key building for the project: in addition to space to welcome trains and travelers, it would have a large hotel, offices for the postal service, a police station, and other services.

Construction began on the station in 1915, after World War I, and it opened in 1928. Only eight years later, the train services and the station along with them were impacted by Spain’s Civil War. In the mid-40s, its doors closed, and it fell into disrepair.

However, the history of the Canfranc train station is about to take a turn. A recovery project will convert this iconic abandoned building into a hotel that will open its doors at the end of 2022. 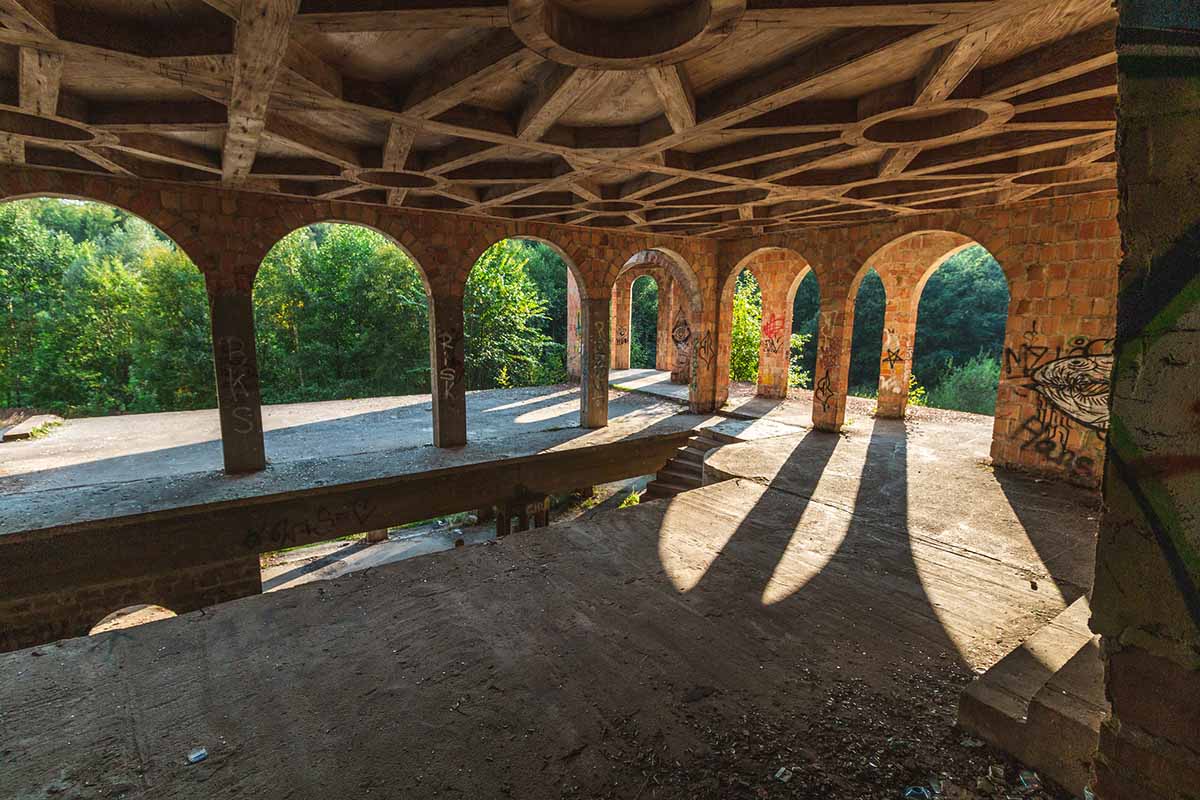 In the 1980s, artist Piotr Kazimierczak began to build a home for his family that would also house his studio. Soon, the building reached such dimensions that it became known as the Łapalice Castle. And for good reason: it even has outer walls and more than ten towers.

Kazimierczak was forced to abandon the project a few years after breaking ground because he didn’t have the permits needed to build such a large house. It has been abandoned ever since. It’s a regular destination for tourists, curious people, and urbex fans (visiting abandoned places, especially houses and buildings). 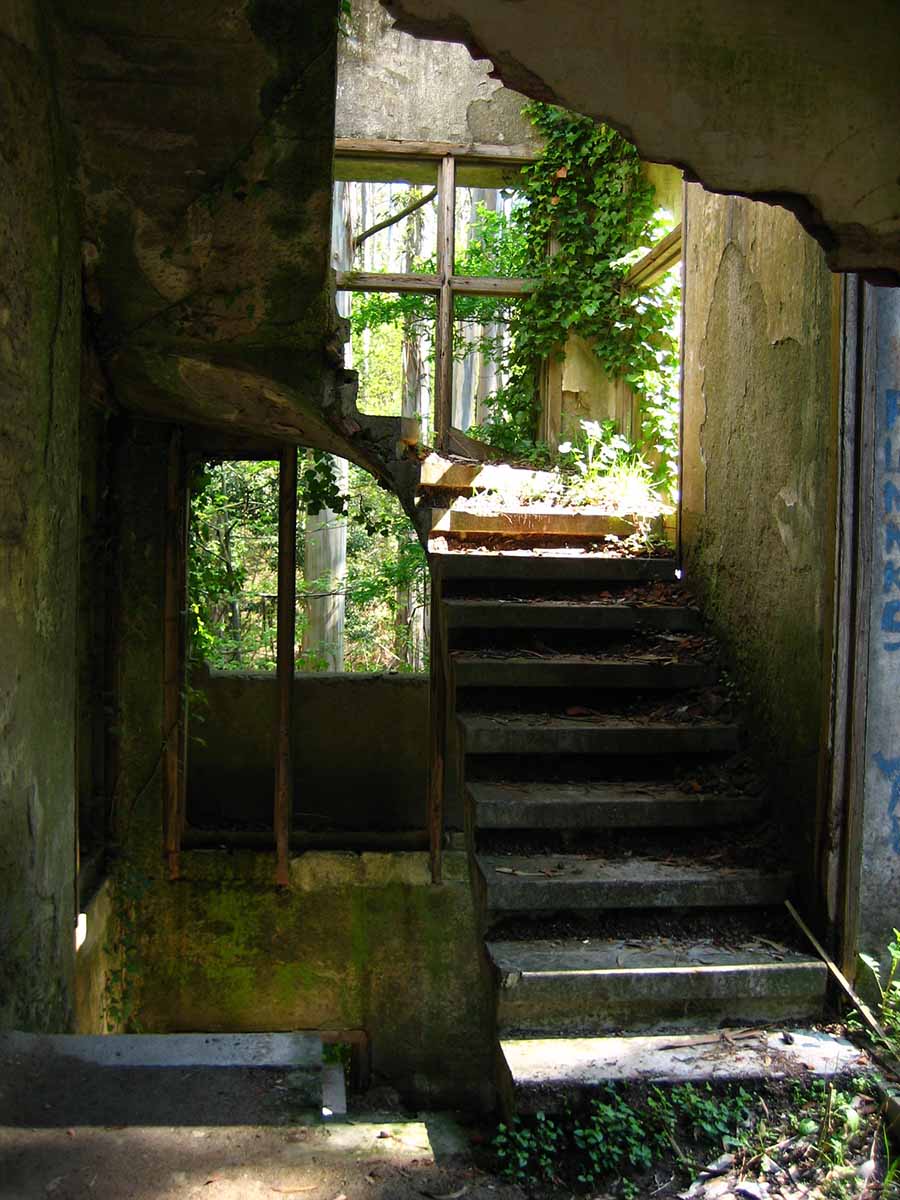 When construction began on the Cesuras Sanatorium, it promised to be a beautiful modernist building. Its ruins are located in the town of Oza-Cesuras, in A Coruña (Spain), in the middle of a lush pine and eucalyptus forest near natural springs.

The location was a key part of the project: the Cesuras Sanatorium was designed as a hospital for tuberculosis patients who needed fresh air and a healthy environment to get better. Construction started in 1922 under the guidance of architect Antonio González Villar. However, construction came to a halt in 1931 due to budget complications, and after the outbreak of the Civil War, it was abandoned forever.

As with the Canfranc train station, there are projects aiming to give the Cesuras Sanatorium a second life. 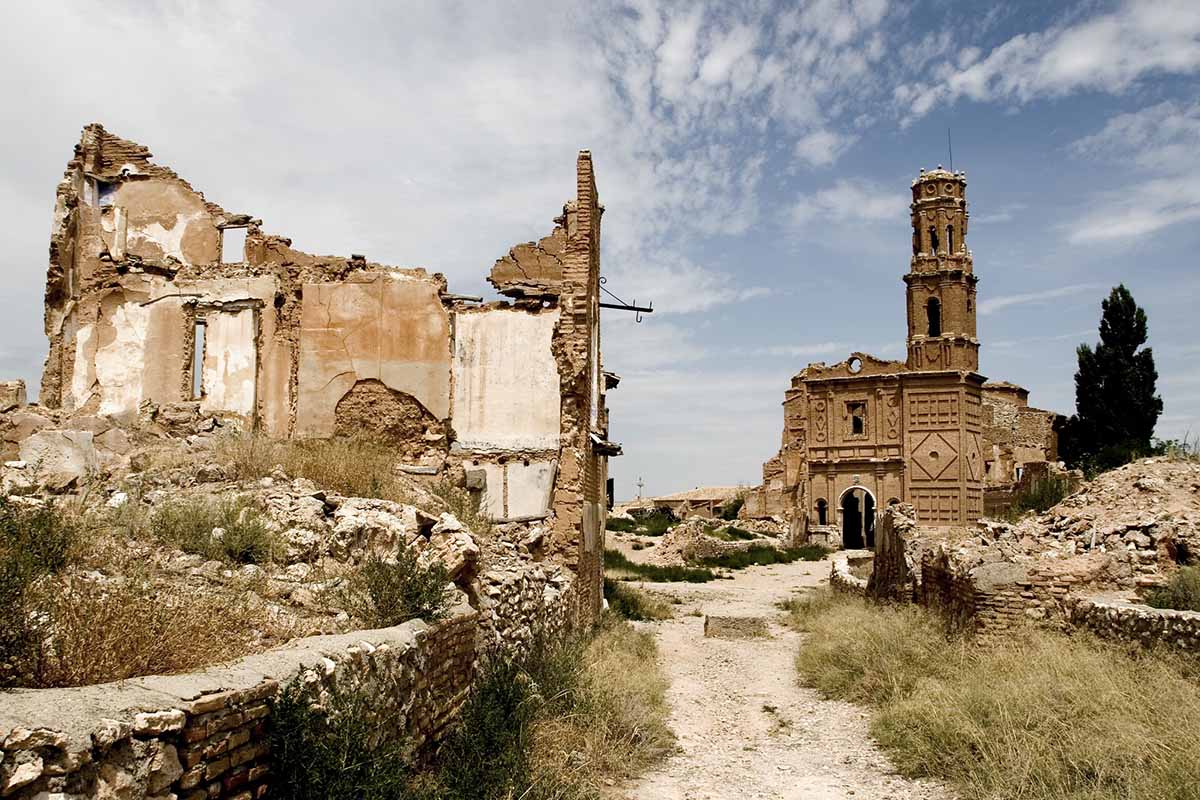 Remains of the church at Belchite. Roberto Latxaga (Flickr)

The town of Belchite (Zaragoza, Spain) was the scene of one of the bloodiest battles of the Spanish Civil War. It ended up totally destroyed, and under Franco’s dictatorship, another town was built right next to it. Ever since then, they have been called “new Belchite” and “old Belchite.”

In old Belchite, there are still the remains of buildings that saw centuries of history and were knocked down by bomb blasts. Among them are a Mudejar-style tower, churches, and convents. 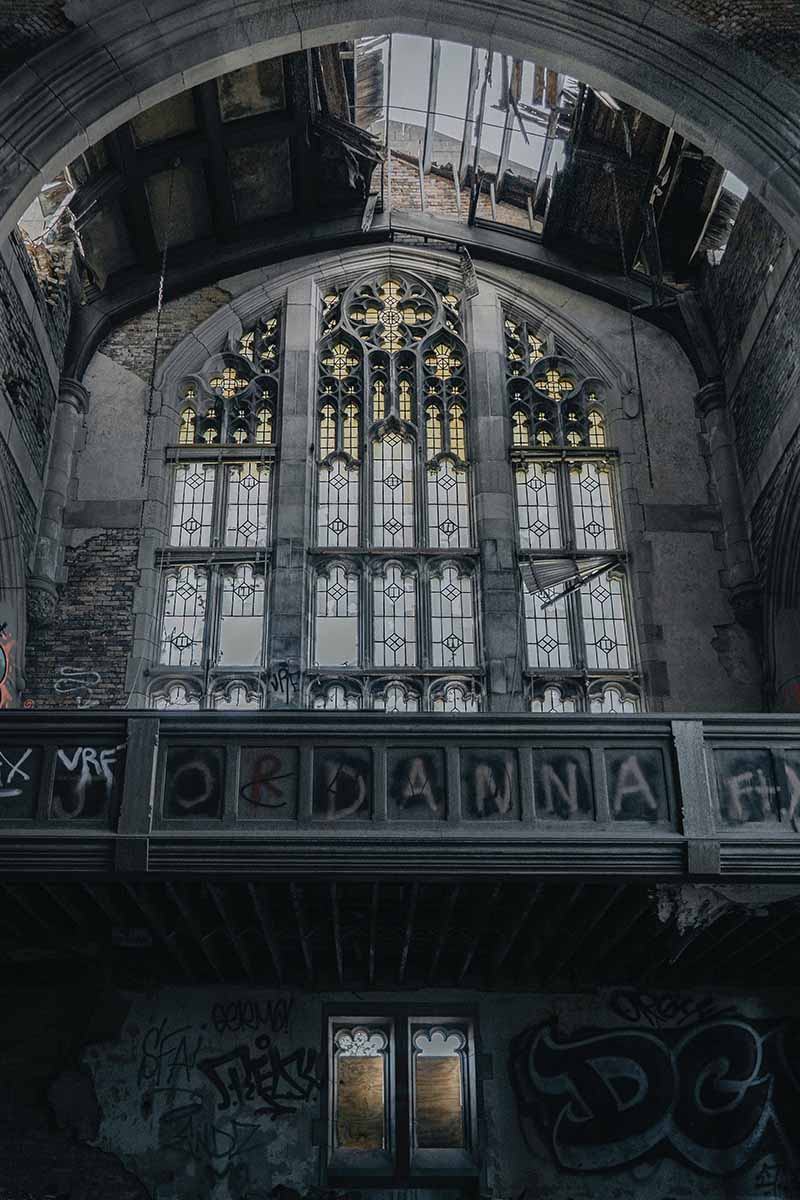 Before falling into disuse in 1975, the City Methodist Church had become one of the largest Methodist churches in the eastern United States. It was built in 1906 in Gary, a town in the state of Indiana. However, half a century later, it started to lose its congregation; over the years, the church was abandoned.

However, it has continued to have life: it is a popular destination for urbex fans and a frequent location for filming series and movies. ‘Nightmare on Elm Street,’ ‘Transformers: Dark of the Moon,’ ‘Pearl Harbor,’ and ‘Sense8,’ are just a few of the films and series that have been shot on location at the City Methodist Church.

The list of abandoned buildings that still get our attention for their architecture doesn’t end here. The Bannerman Castle in New York, the Gordejuela water elevator in Tenerife, the Beti Jai in Madrid, and the Salto de Tequendama Hotel in Colombia are some other good examples.