Engineering behind the scenes, engineering in the theater

Have you ever wondered about engineering’s contribution to the theater, staging, or the artistic development of putting on plays? Not only did architecture inspire the theater and vice versa, but these arts are closely related to engineering. A good part of what happens in the theater is hidden, invisible to the eyes of the spectators – even when it’s in plain sight. This is the relationship, a centuries-old one in many cases, between engineering and theater.

Cycloramas modifying the physical space (in our mind)

For technical reasons, the theater has certain depth challenges. The stage has a specific background for this purpose, so the back of the stage is a critical space for perspective, the illusion of depth, and immersion. This has been known for centuries, and the reason why the stage background usually has a curved backdrop with skies, landscapes, or visual effects that support the plot.

This play of optics would have been impossible without technical ideas like perspective or projections. In fact, Louis Daguerre, inventor of the daguerreotype, was also a theatrical decorator and implemented cyclorama techniques in the 1820s to generate visual impact.

In theater, there’s one essential light load element: the battens, trusses, pole, or stands, which serves to hang all kinds of components, often backdrops that visually shorten the scene, different backgrounds, decorations like clouds, and sometimes even people. The image below shows some trusses right at the top of the fly loft that the photograph captures. 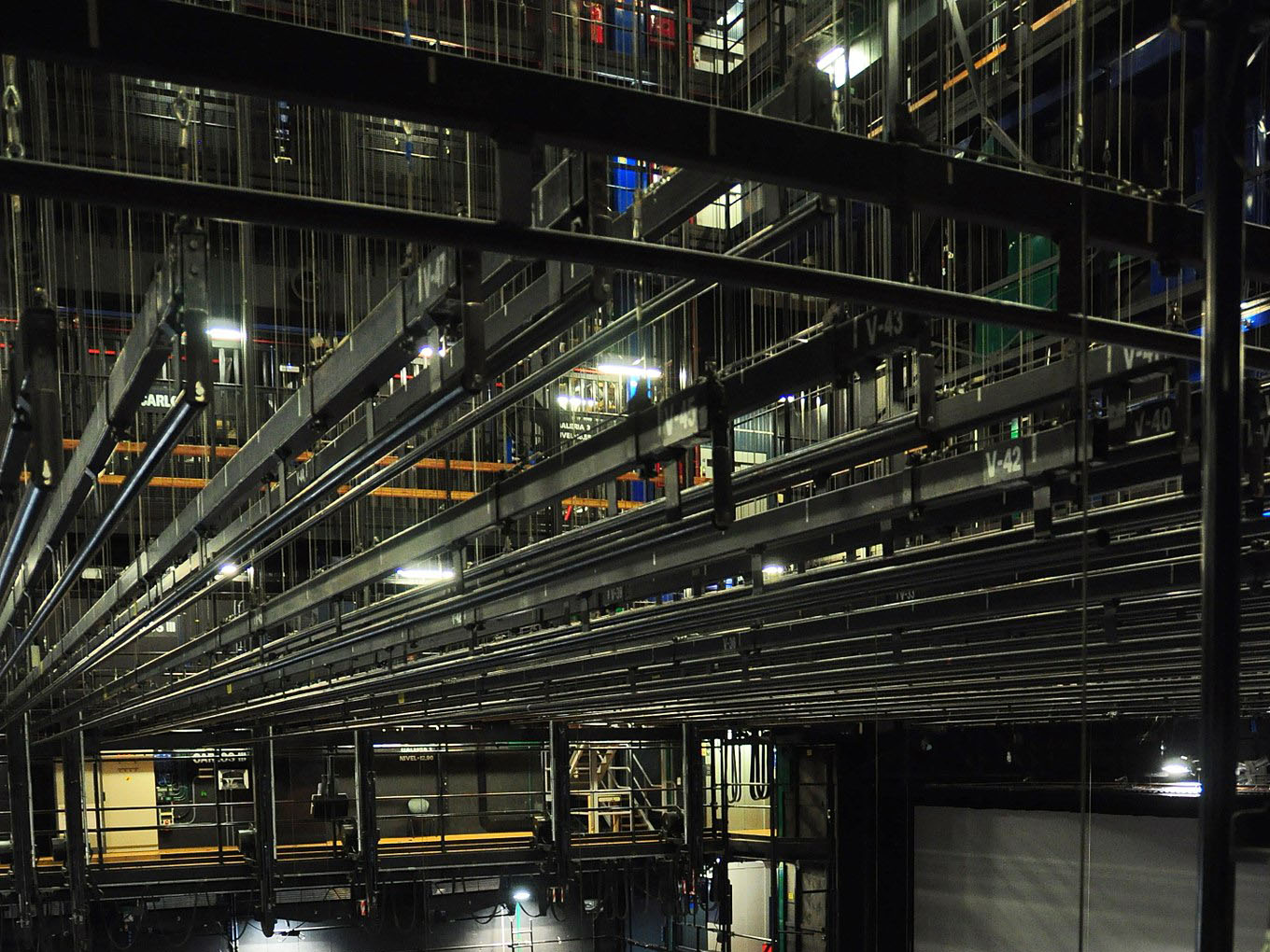 In theater, striplights are the set of lights that illuminate the different scenes. They hang from the trusses or batten or are sometimes on the ground or on some other scaffolding system; they’re essential to adding character to the play.

The history of lighting techniques has been closely linked to the history of theater ever since its start. In the first theaters, for example, long black curtains with painted white rays were shaken, simulating storms, a way of playing with light or its perception. For centuries, though, the light par excellence were torches or candles; the revolution came in the 16th century.

Nowadays, lighting is a high-tech process with a very high level of automation, coordinated with different parts of the play and other technologies that go on behind the scenes.

The backstage, the fabric scenes that narrow the stage and cover what shouldn’t be seen by the audience, are a fundamental part of the theater and have been since its very beginning. They hang from trusses and other structures, hiding an endless number of elements.

For example, there’s the catwalk, a walkway that sounds like something related to engineering because, in fact, it is. This walkway consists of a space suspended above the stage, which makes it possible to lift or lower ropes and decorations. It was a key part of the development of theater during the Enlightenment, and it is still in use, along with safety features like PPE. 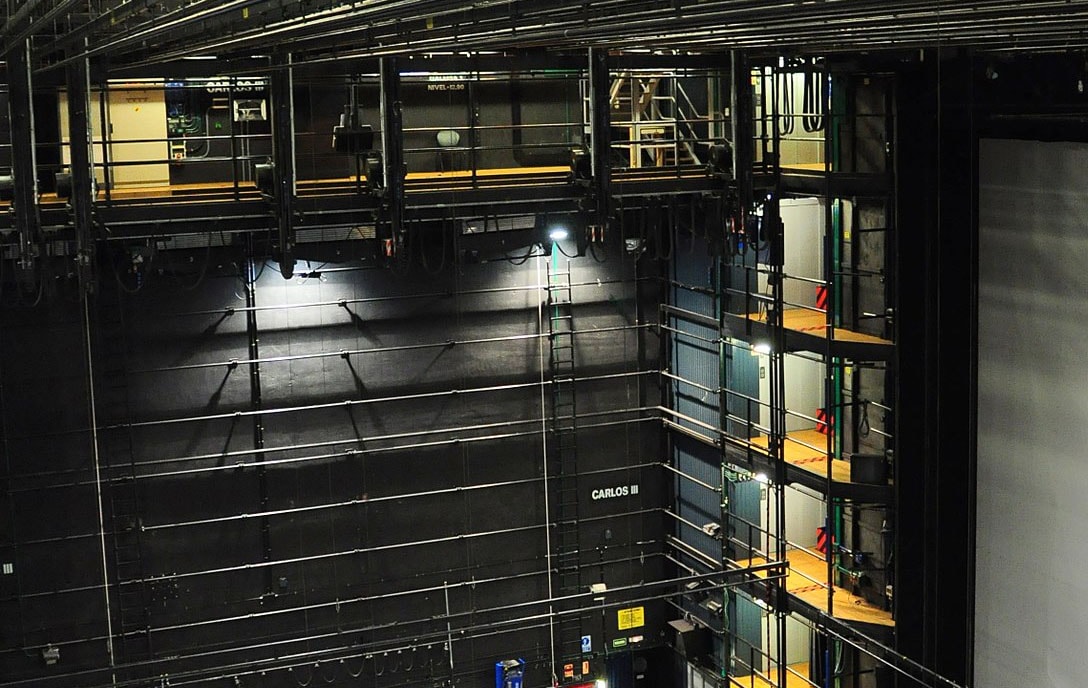 In some theaters, the mechanical systems are of such high complexity that they require automated processes, adding large machines and engines, and of course, hiring the right talent to make everything work as it should. This is where the head of scenic mechanics comes in; this job exists at some of the most cutting-edge theaters, like the Teatro Real.

The opening ten seconds of the video show its complexity. This “mechanical puppeteer” is unique, while others like the Sydney Opera House, the Royal Opera in London, the Grand National Theater of China, and the Vienna State Opera use similar mechanisms – almost all are lateral instead of top-down. 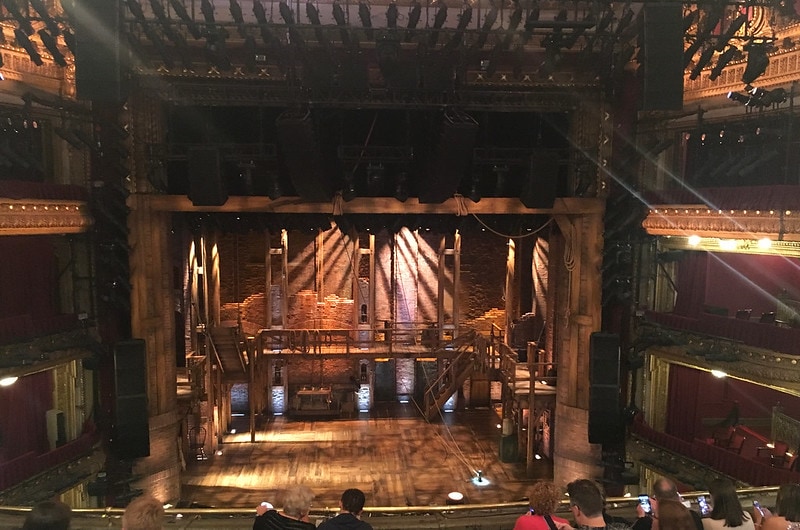 In the image above, you can see several circular marks on the stage. This is a rotating stage of high quality, the kind used in the Hamilton musical. This platform rests on a system of wheels and several electric actuators that make it rotate. In some cases, the entire set moves (a revolving set), making it much easier to change the scene.

In addition to these systems, there are also more complex ones like elevators on the stage, fly systems to lift loads, guides for moving platforms, and even robots that traverse the scene. Engineering is present in every part of the theater.