Can we live without roads? The case of Greenland

Unless we invent tele transportation or flying vehicles for the bulk of the population (helicopters don’t count, they are not affordable), roads seem an unavoidable feature. Nothing indicates that we will leave roads to one side in this century, as they are still an efficient means of transport compared to many others, the most obvious being aeroplanes, a mass means of transport.

Tests are being carried out on self-propelled aerial vehicles such as the Kalashnikov drone, the SkyDrive or the Passenger Drone. However, most transport will continue to stick to the ground. Flying is costly and requires a large amount of power, which means a large amount of energy. And it therefore seems strange to us that there are places in the world, such as Greenland, where roads do not exist. Where flying is more common than taking a car.

No two population centres are connected by road in Greenland

Paco Nadal (@paconadal) is a traveller and journalist famous for his travel articles published in Spanish newspapers. In 2013 he wrote the following about Greenland:

“No two population centres are connected by road in Greenland. To go from one village to the next, or from one town to the next, you need to fly, take a boat, a dog sleigh or a snowmobile in winter.”

Which is true, with the exception of a road running for less than 6 km from Ivittuut to Kanilinnguit, two tiny population centres in the south of the island. This road, which has no name, very often freezes over. This does not mean that there is no asphalt in the rest of Greenland; in fact, there are two traffic lights in the town of Nuuk, bringing the total number of traffic lights in Greenland to… 2.

The image below shows the town of Nuuk, total population 17,000. Look on the edges, and you will see that the streets never actually turn into roads: 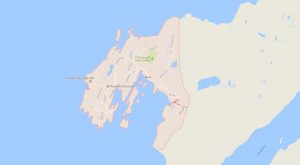 The reason becomes obvious if we zoom into the area and look at the “nearby” town of Qeqertarsuatsiaat (population 200). Where a political map shows merely land and sea, a satellite map provides a more realistic view. Both the town of Nuuk and the village of Qeqertarsuatsiaat border on the North Atlantic and the Arctic ice. This ice is known as Inlandsis, and can at certain points be as much as 3 km thick. 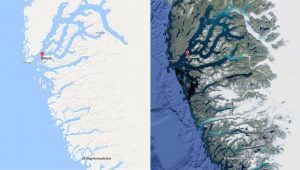 Under such conditions, it is already difficult to lay the tracks we showed you in the articles on the frozen roads of Alaska or the salt deserts of Bolivia, let alone roads. Roads are such a necessary element of our society that at times we do not even realise they are there, in much the same way as we tend not to notice the sanitation system or the power grid. And we hardly ever wonder if there is any other mode of transport. An alternative to roads for impossible-to-access places.

The passenger ferry linking population centres on the west coast of Greenland (the Umiaq Line) takes about three days to travel to all the different ports in the country. The only passenger ferry covering the route, the Sarfaq Ittuk, starts the journey in the southern port of Narsaq and travels from there to Qaqortoq.

It then calls into every coastal harbour, dropping off people and dropping off and taking on board limited cargo loads. Arsuk, Paamiut, Qeqertarsuatsiaat, Nuuk, Maniitsoq, Kangaamiut, Sisimiut, Aasiaat and the far off and almost unpopulated Ilulissat. It then turns south again to cover the same journey, again and again, like a regular bus service, this time with the abrupt coastline to port. 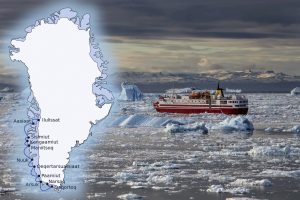 For the people of Greenland, the Sarfaq Ittuk (whose journey we can follow in real time at Marine Traffic) is one of the few commuter options for neighbouring populations. For many, this ship, owned by Royal Artic Line and Air Greenland, is the only means of transport available in a country without roads.

But not all the population has access to ships which can resist Arctic temperatures, and this fact is even used to attract tourists. “Experience Greenland” says the Arctic Umiaq Line website. Touring the coast in economy accommodation will cost around 2,700 Danish kroner, or some 360 Euros. That is the cost of not having asphalt joining population centres, but you cannot deny that it comes with an added adventure bonus.

Roads come at a much more affordable cost per kilometre and user for countries without ice and with greater population densities, for, although the initial cost of laying the asphalt may be high, it is subsequently used and amortised by a large number of people. Moreover, maintenance and repairs are less costly than the initial laying process. In Greenland, with a total population of 56,000 and a huge amount of land to cover, roads would be a difficult-to-implement mobility option.

Despite the ferry lines existing along the coast, most trips in Greenland are made by plane, whether for domestic (to other population centres in the country) or international travel. In this latter case, Kangerlussuaq airport, seemingly located in the middle of nowhere, has daily flights to Copenhagen. 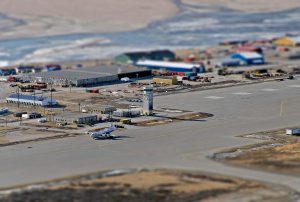 Kangerlussuaq is a tiny village and airport (more an airport than a village) located at the end of the Davis Strait, the mouth of which is relatively close to Kangaamiut, and serves the whole of the west coast. But there are other airports in the country. Kulusuk, on the east coast, Nuuk in the east and Narsarsuaq in the south form a triangle constantly served by flights, and all three have a regular service to Reykjavik in Iceland.

The alternative to this is the use of hot air balloons, snowmobiles or dog sleighs. The local population, of Inuit origin, or mixed Inuit-European, sometimes uses these means of transport to move, but most tourists simply take a few pictures on the border of each population centre before returning to the ferry.

Greenland is a fantastic place which shows us how ingenious humans can be when in a region where roads are impossible. It also shows us the cost of other means of transport, which many times are unaffordable and require important local and Danish subsidies to continue operating.