From AAA to ZZV: the strange world of airport codes

Everybody is familiar with the ubiquitous ‘three letter codes’ used to designate airports. It’s impossible not to see them on luggage tags, tickets or booking websites. Ferrovial Airports also uses codes such as LHR (London-Heathrow), SOU (Southampton), GLA (Glasgow) or ABZ (Aberdeen) on its airport assets.

Although in our case the codes seem a clear abbreviation of the airport’s name, in many other cases this rule doesn’t hold true and the codes can become a bit of a puzzle. The case of Málaga, for example, which has the code AGP, of which more later. 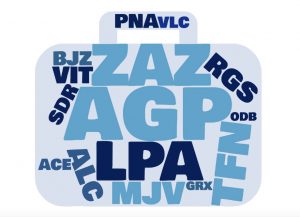 Codes are assigned by IATA (International Air Transport Association) since 1930 to identify the world’s airports in short form. Initially, the two-letter codes of weather stations were used, or any other local convention.

The 26 letters of the Roman alphabet provide 17,576 different permutations. Today, there are more than 10,000 commercial airports in the world using IATA codes. And although there isn’t a common pattern to fit all codes, some of the guidelines used by IATA seem obvious: 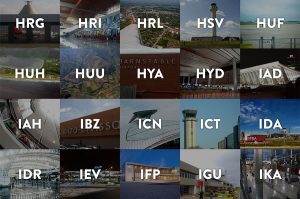 AGP (Málaga), a code with a history

Some believe that AGP refers to the ‘Roman temple of Agrippina’ (which was in Rome actually, rather in Málaga), or to the abbreviation (in Spanish) of ‘Great Picasso Airport’, Málaga being the artist’s birthplace.

However, the explanation is much simpler: when IATA started assigning codes, MAL was already taken by the airport on the island of Mangole in the Moluccas (Indonesia) and so were MAA (Madras, India) and MAG (Madang, Papua New Guinea).

And so it was necessary to resort to using just two letters, adding another one which was still free to complete all three, so AG was chosen, adding the ‘P’ at the end because the Q, which other airports like Sevilla (SVQ) or Santiago de Compostela (SCQ) use, would make AGQ which was already assigned to Agrinio (Greece).

So, if you want to know more about the airports behind these codes, check out the complete list on the  IATA website. To learn a bit about their history, go to Airport Cod.es, although in some cases the explanation may sound more the stuff of legends than a true story.