A Different Take on the Map

The other day I was running my finger across one of those maps in which you scratch and mark the countries you have visited, I realized that the way in which our planet has been represented until now, with rivers, mountains and borders that mark the territories of the different countries, could have their days numbered in the current globalized world…

Long gone is that August 3, 1492, the date when three vessels, captained by Christopher Columbus set sail from Palos de la Frontera (a town located in southwest Spain) in search of a new route to Asia which would strengthen and promote trade.

Just two months later, Columbus and his crew unexpectedly laid eyes upon a new world which would change the course of history, and since then, but particularly during the last century, there has been a revolution in the way that cultures, counties, people and companies interact.

To prove this claim, one only has to take a look at the trend in the number of international tourists from the 1950s until today, which has risen exponentially: 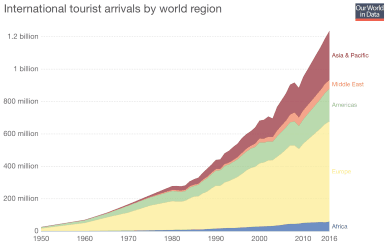 However, if we consider the percentage of exports as a share of global GDP, the conclusion is the same: from a business perspective, the world is far more interconnected today than barely one hundred years ago. 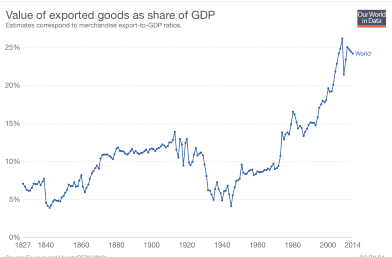 Furthermore, the graph above illustrates other equally interesting conclusions. For example, this notable increase in the percentage of exports as a share of global GDP of almost 20% in just 200 years has experienced falls due to the great wars and the main economic crises. Also, it has experienced an undeniable boom in the last five decades, multiplying the ratio recorded straight after the Second World War by 5.

The causes of this increase in international exchange are obvious: a cultural and economic exchange which transcends nation’s borders and their surrounding environments, widening target markets and encouraging economic growth and social development.

For thousands of years it has been clear that the relations between territories and the exchange of materials, ideas and cultures are one of the keys to the advancement of humanity, but what is the cause behind this recent revolution we are experiencing?

As for the reasons for the spike of this exchange in the last 50 years, it is without a doubt worth highlighting the technological advances in infrastructure development and construction, which have encouraged immediate communication on an unprecedented global scale, to the point of which exchanging things in real time is now no longer affected by the fact that we may be thousands of kilometers away.

This is demonstrated by the following graph which illustrate on the map two of the infrastructure networks which have contributed the most to this globalization: roads and transmission lines.

In the first graph we see a dense network of roads which allows us to cover short and medium distances affordably, and which have quickly emerged as essential tools in our daily lives. 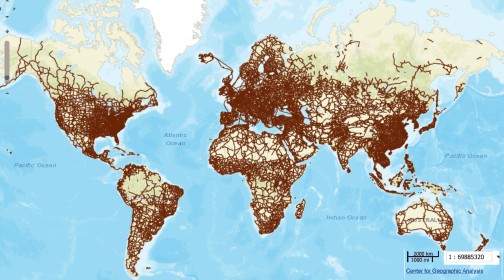 As for the electricity map, it helps us to locate big cities and the most industrially developed areas. When connecting power generation points with the main consumption centers, we see that their main hubs are areas with large population concentrations: namely the so-called megalopolises, which represent 58% of the world’s population today, and in the next two decades this figure will reach 70% and transcend traditional national borders. 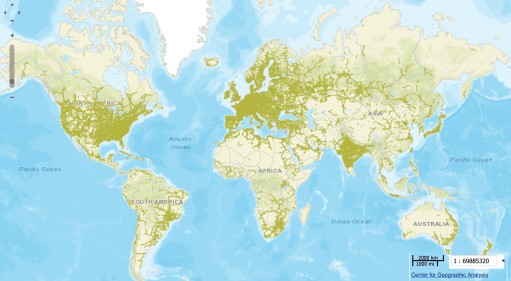 If we look closely at the previous illustrations, they all draw new maps that transcend the traditional borders of countries and in which megalopolises are strongly highlighted. They are especially interconnected by networks of infrastructures, like airports and roads, that favor a constant and rapid exchange of materials, services, and wealth but also of cultures, ideas, and, ultimately, development.

It is precisely this development that is evident in the following map showing how wealth is once again concentrated in large cities or megalopolises, which have better infrastructure networks. 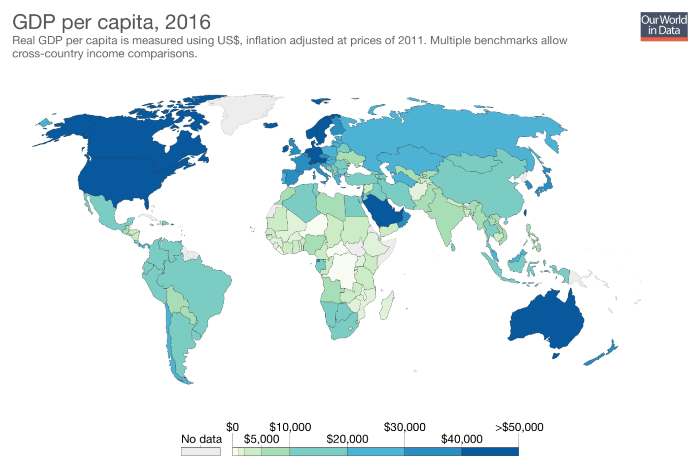 Therefore, we can conclude that transport infrastructures are promoting the development and growth of different countries, and together with the great technological revolution that we have experienced in recent years, are allowing the world to evolve from being locally oriented to being globally oriented, constructing a new way of representing the world which we live in.