The Beatles sang “Can’t buy me love”, and most happy couples will probably agree with that statement. But can money not buy a gesture? Can it buy the most romantic homage to love the world has ever seen? And perhaps it could bring more beauty to the world, honoring that love for centuries. On today’s blog post, we’ll be looking at how much love costs, or what went into building history’s greatest ode to love—the Taj Mahal.

The story is known by most anyone who ever learned about of the Taj Mahal in World History class, but that doesn’t make it is any less romantic. And the story goes thus, Prince Khurrum and Arjumand were betrothed in 1607 but before getting married five years later, Prince Khurrum would have two other marriages, which according to the official courts amounted to little more than “the status of marriage.” Upon their marriage, Arjumand was given the name Mumtaz Mahal, meaning jewel of the palace and Prine Khurrum changed his name to Shan Jahan.

Tragically, the story of the Taj Mahal begins where the life of Mumtaz Mahal ends, giving birth to their fourteenth child. His beloved wife’s passing away caused Shan Jahan to go into a deep depression often likened to the legendary tragic lovers of Muslim lore, Majnun.  For the following two years, Jahan was unable to enjoy the pleasures of his riches; he stopped wearing jewelry, sumptuous clothes and perfumes, and even stopped listening to music. One historian claimed that his once dark beard went white and he had to start wearing eyes glasses because all the tears he had wept had caused his eyes to deteriorate. At the end of those two years, with the help of his eldest daughter Jahanara Begum Sahib, Jahan overcame his grief and began planning and designing what would be one of the greatest mausoleums known to humanity. 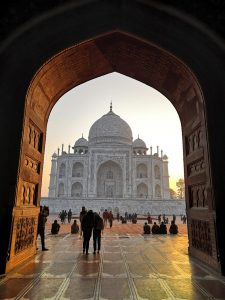 How was the Taj Mahal designed?

The first phase, as with any construction of great scale, was to choose an architect. In the case of the Taj there were two. And Jahan did not settle for any architect but made sure to find the most skilled and talented in India and beyond. Though they are still debated, two architects are mentioned by name and have their presence aligned with other great works of the era: Ustad Ahmad Lahauri, who had laid the foundations for the Red Fort, and Mir Abd-ul Karim.

The terrain of the Taj Mahal is divided into five sections: The first being the “moonlight garden” situated on the of the northern side of the river Yamuna; the first section on the southern side is the mausoleum, which is the most commonly recognized structure of the Taj Mahal, as well as the mosque and the Jawab; after which there is the Charbagh garden with several pavilions; then the jilaukhana, where the accommodations of the tomb attendants and the two subsidiary tombs are; and lastly there was the final section, which was originally a bazaar and caravanserai, of which of traces currently remain.

The mausoleum, where the two lovers eternally rest, combined a series of architecture elements to create the iconic structure we’re so familiar with today. From top to bottom the sections are the finial, the lotus decoration, the onion dome, the drum, the guldasta( the Punjabi word for “bouquet”, the Chattri, the Spandrel, the Arch, and the Dado. 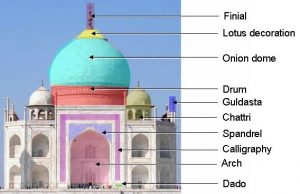 The design of the structure itself was inspired by traditional Persian and early Mughal architecture, making a departure from typical Mughal style of using red sand stone and opting for a more refined white marble. And though only white marble is visible on most of the exterior, you shouldn’t be fooled; the interiors of the walls were actually constructed of brick and rubble inner cores, saving some expenses where in other areas they weren’t spared.

The Construction of Taj Mahal

The materials needed to construct a timeless vision were brought in from hundreds of miles away, requiring over 1,000 elephants to haul them. The white marble was brought from Rajasthan 400 km away, the jaspers from Punjab, and the jade and crystal from China. They brought in turquoise from Tibet and Lapis Lazuli from Afghanistan, sapphire from Sri Lanka and carnelian from Arabia. There is a total of 28 varieties of precious and semi-precious stones laid into the marble. 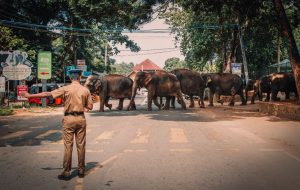 And the spending didn’t stop there; beyond the typical design of a normal building, the Taj Mahal required calligrapher to artistically incorporate 15 different passages from the Koran into the architecture. Over the great gate the calligraphy reads, “O Soul, thou art at rest. Return to the Lord at peace with Him, and He at peace with you.” To carry on with the intricacies of the calligraphy— it was wasn´t just painted on, the inlay for the calligraphy was treated with the same importance as the other visual decorations, with precious stones such as black marble and jasper inlaid into the white marble panels. Of course, throughout the construction, inlaid pietra dura or jali floral patterns flow throughout this masterpiece with yellow marble, jasper, and jade, all polished and leveled with the walls to emphasize to the great detail of the craft. Other decorative techniques used include carved flowers in the marble, intricate pierce work, archways in the mosque, incised painting, as well as finial floor tiling. 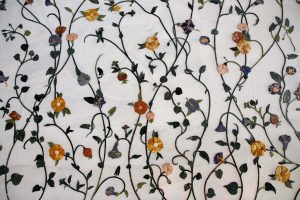 How much the Taj Mahal cost

To precisely calculate the cost of the Taj Mahal is a rather difficult task considering infinite variables that have fluctuated over the almost 400 years since it was commissioned for construction in 1632. If we look at the current prices of some of the precious stones used, we can get an idea of its true value. With Jasper at 5 USD per carat, Jade at 3,000 USD per ounce, Black marble around 30 USD per square meter, Yellow Marble from 30 to 40 USD per square meter, and White Marble up to 500 USD per square meter, we know it couldn’t have been cheap…Not to mention an estimated 20,000 laborers working over the span of 16 years (In 1637-39 AD an Indian servant of the Dutch East India Company could expect to earn 36 rupees per year). Though the original budget was estimated at 4,000,000 rupees the final cost of the works ending up being 5,000,000 rupees (current value of 61,837 euro, which despite being equivalent to a modern fortune seems like a bargain for immortalized love!