Switching Out Rooms to Save on Air Conditioning?

The search for energy-efficient homes leads us to invest in isolation, better machines, and new habits. But would you consider changing how you use several rooms in your home if that would let you save on air conditioning? For instance, switching a master bedroom on the south face for a living room on the north side can entail significant economic improvement.

This question, posed on Twitter as we have here eliciting answers of Yes/No/I don’t know, saw participation from 410 people. Six out of ten answered in the affirmative, so there is interest in optimizing housing. In this article, we will look at the thermal properties of each wall, as well as some alternatives, using the following basic outline as a reference point.

Many of the newly built residences draw on established concepts of bioclimatic architecture. They take into account factors such as the color of the wall, air’s behavior in stairwells, and how different rooms are used based on their orientation. But how does sunlight fall on them? 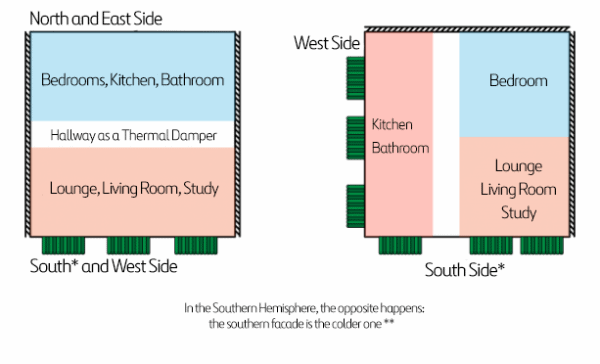 The thermal behavior of the northern side

The north wall (south wall for readers in the southern hemisphere) is by far the house’s coldest facade throughout the year. In winter, this is where the most significant heat losses occur, and in summer, we will find it to be pleasantly cool.

This wall is the recommended location for rooms such as the bathroom, which we only need to heat a few minutes a day to shower; the kitchen, which produces its own heat from the stove but which is often ventilated frequently and where we lose a lot of heat; and the bedrooms. This last room is significant, and we must say more about it.

When it comes to getting a good night’s sleep, temperature is critical. Ideally, our body is about 22ºC, so air in the bedroom should be between 15ºC and 18ºC. Even in winter, a bedroom on the north side offers better sleep.

If we are lucky enough to have a house on a north-south axis, we can take advantage of the heat on the southern side to raise the temperature slightly in the northern-most rooms in winter, in addition to using a central hallway to insulate these two areas in summer and to keep the bedrooms cool.

That way, we can reduce energy consumption in both winter and summer. This wall also receives less light, and it is advisable to leave it for areas where we spend little time or where we sleep.

The thermal behavior of the southern side

The southern facade (or the north, for readers in the southern hemisphere) is the warmest for most of the day. The sun shines on it throughout the day, and it stores a significant amount of thermal inertia that is released hours later. This is very important in terms of the rooms’ thermal behavior.

This means that the temperature in these rooms will rise as the day goes on, and it will even continue to go up once the sun has set if the walls are thick with poor insulation. The energy stored in the wall will be released to the interior slowly, sometimes up to 12 hours later.

That’s why it is recommended to leave southern areas of the house for purposes such as the living room, common areas, the study, or an office. In winter, the sun on this side will heat the living area throughout the day and even in the evening, minimizing the need for air conditioning. But what about in the summer?

In summer, intensive use of the southern wall as a recreation area can cause our air conditioning bill to spike. However, this is when we spend the least amount of time indoors thanks to the good weather; in addition, we can use passive elements with zero consumption, such as awnings. 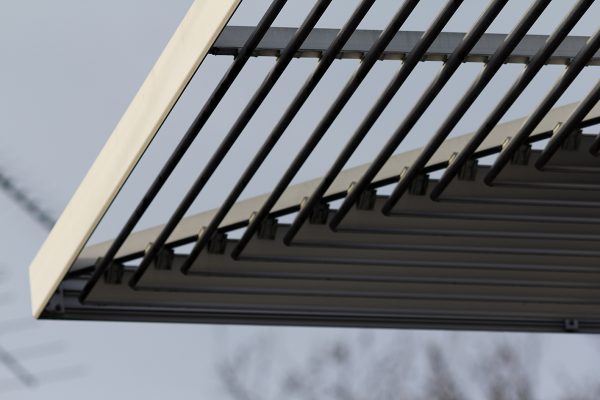 It is highly recommended to invest in shade solutions such as horizontal eaves, canopies, static slats, or brise-soleil (pictured above). In summer, the sun is high in the sky, and these features will prevent light from hitting the facade. In winter, solar radiation will enter the house with no problem.

How the east wall works

The sun rises in the east all over the world, regardless of which hemisphere we live in. This means that the first rays of daylight will hit this facade, though this also means that by noon, it will no longer have sunlight, only indirect light from the sky or clouds. How can we use this to rethink houses’ interiors?

An interesting idea, though not always feasible for our work, is putting bedrooms on the east side to help us wake up and maintain an appropriate circadian rhythm. As this wall cools from noon on, this is where we should locate bedrooms, whether we use the sun as an alarm clock or not, when the northern face isn’t an option.

So if our wall is on an east-west axis rather than a north-south one, it is also recommended to put the kitchen and the bathroom (called “servant spaces”) on the eastern side, as we did above with the north (in the northern hemisphere). However, as we will see below, sometimes there is no clear longitudinal axis.

The western side, the warmest of them all

The western facade is particularly tricky because it receives the most sunlight throughout the day. Since the sun also sets from this direction, the rooms located on this side will warm up throughout the day, and they will stay warm for part of the night. It is therefore not recommended to keep the bedrooms on this side.

It is also not advisable to locate rooms like the living room or the study on the western side, at least if that can be avoided – especially if we have two orientations perpendicular to one another, as with the case of the floorplan that we’re revisiting.

Some of the main tips in this article can be shown in this diagram – in a synthesized way with a square house, of course, which is not the norm. But these are a valid approach when considering changing around how we use rooms, even if that involves some work.

Replacing rooms within the home

While swapping a living room and a bedroom is relatively simple, moving the bathroom or kitchen is particularly troublesome. Such solutions are only recommendable if we are going to involve construction, such as remodeling the kitchen or replacing the line of radiators. By taking remodeling as an opportunity, we can repurpose the house with new uses.

We also have to consider that some homes make it impossible to follow this sort of advice: those with a single exterior orientation, for instance, which will limit their movements. In these cases, we will have to decide what kind of amenities to prioritize. So in a home with a northern orientation, we can ask questions like:

In other words, climate considerations have relative importance in the design and use of our homes. If our goal is to save on air conditioning and minimize our environmental impact, we can take some of these keys into consideration.