The History of Plaza Mayor - And My History With It

This holiday season, which is so special and so different this year, I guess we’re all longing for our own Christmas traditions and, above all else, our loved ones. For as long as I can remember, my Christmases have always been linked to Madrid’s Plaza Mayor. When I was little, there would be that special day of the year when we would go buy our Christmas tree. We strolled through each of the stalls in Plaza Mayor until we found the best one that was both good, pretty, and cheap. Back then, the Plaza seemed bigger than ever, a bustling square that smelled of Christmas and jokes. Now that I think about it, it’s funny how the square was such a familiar landmark to me as a child. And how it’s changed since then! From those dear memories of Saturday afternoons to being the core of my professional life every day. Even today, I get the feeling that no matter what happens, it will still be there to remind us that what’s really important never changes.

The Christmas we spent renovating Plaza Mayor, I realized that the square transforms at that time of year, becoming magical. It fills with the lights and sounds of firecrackers, party horns, tambourines… they will transport you as the sun sets. The restaurant terraces disappear to make way for the traditional Christmas market. Tourists and local families alike come for shepherd figurines, moss, the trendy beanie of the year, or a calamari sandwich. 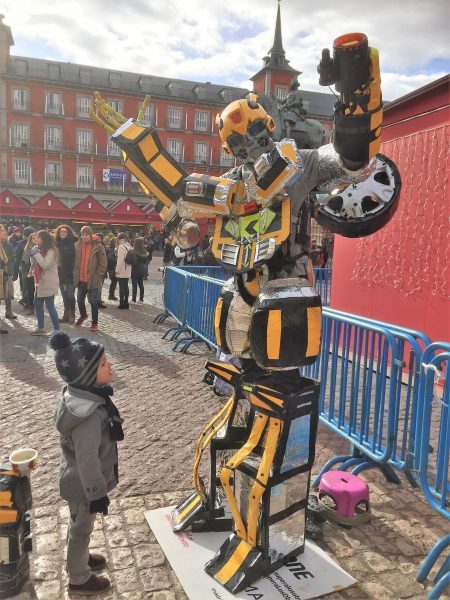 I’ve discovered the many different sides of Plaza Mayor: the most popular one is surely the one that hundreds, if not thousands, of tourists cross through each day. There’s also the square that belongs to those who work there every day, those who see the sun rise over it, those who keep it in good shape. There’s the square known to those who have lived there at different times, those who have cared for it and stood up for it. But I’ve also discovered a square with a lot of history tucked away in its corners. I can assure you that every feature we’ve restored and protected drew my attention and is now engraved in my memory forever. With this project, we got to know so much about Plaza Mayor. Just as we want to know everything about those we love, the story behind every stone in the Plaza piqued my curiosity a little more.

One of the first things I found out about was its origins and multiple rebirths, rising from the ashes three times. The Plaza was first the market on the “outskirts” of the city, then known as the “Plaza del Arrabal.” Flanking the statue of Felipe III was the old city bakery, the Casa de la Panadería, and the Casa de la Carnicería butchery that remind us of its origin. However, the squared has experienced three fires, the last of which was the most destructive.

It was 11 o’clock at night on August 16, 1790. That night would go down in history as the night of the last great fire that ravaged Madrid’s Plaza Mayor. 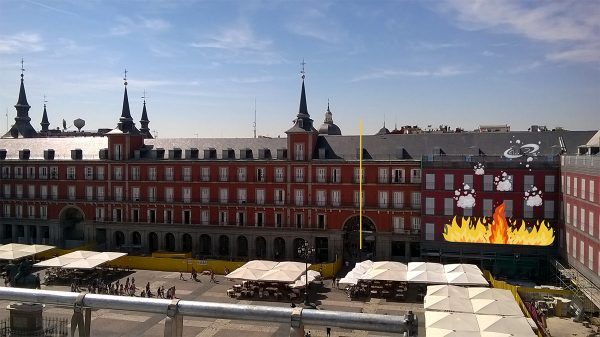 The fire not only destroyed part of Plaza Mayor; it also reached the Plaza del Conde de Barajas and what is now the San Miguel Market. All the architects and master builders’ combined knowledge was needed to slow the relentless advance of the flames. As the story goes, Francisco de Sabatini himself, the King’s top architect, did not leave the Real Casa de la Panadería all night. At the time, the former bakery housed the Royal Academy of History. Demolishing several buildings was even necessary to slow the advance of the flames.

This is how Juan de Villanueva would come to play a part in the square’s history, along with his mentor Juan de Herrera and Juan Gómez de Mora. Juan de Villanueva’s best-known work is the building for the Royal Cabinet of Natural History – better known today as our Prado Museum.

In 1791, Villanueva set forth his plan to rebuild Plaza Mayor and prevent any more fires from spreading through the square. This plan fell into my hands as soon as I arrived to the Plaza. I can’t help but notice how something so iconic in Madrid had such a clear, simple reconstruction plan.

Using wood was prohibited, especially for structural and dividing elements. With this plan, Juan de Villanueva took a determined step forward in preventing another tragedy like the one that had occurred on August 16, 1790.

“Dividing walls of brick only, no wooden latticework, framing…”

Another “curious” story about this site has to do with its color – or at least, the color I remembered from childhood on. If anyone had asked me what color the Plaza was – that square I would walk through so often with my father, watching artists paint – I would have answered without thinking: RED! Close your eyes for a moment. Can you imagine the square being another color? When I came across this picture, it was quite a revelation. For our younger readers, the woman in the photo is Lina Morgan, an artist. If you look in the background, though, you can see the square in a different color than the one we’re used to. 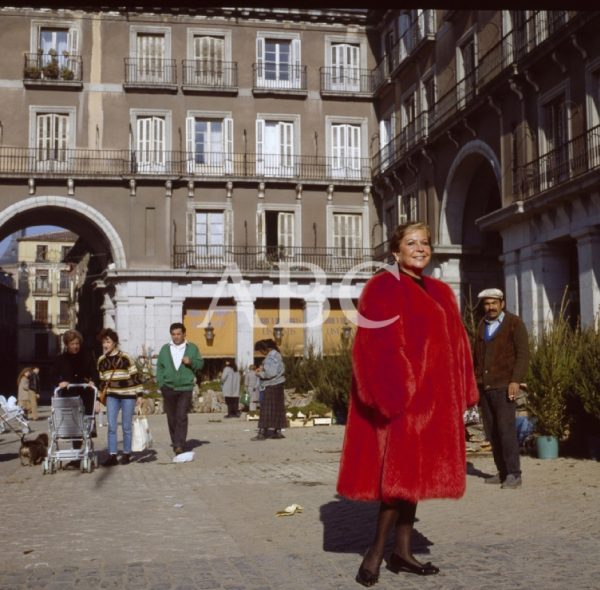 When I visit Plaza Mayor and see children, including my own, I imagine that square from yesteryear, brown and filled with trees and trams, almost something of a park. People would sit on benches and wait for whatever mode of transportation would take them to their destination, oblivious to the changes that would transform this space to make it what it is today. The Plaza was a totally different square then: it was green and had benches, fountains, buses, trams, and attics. At the same time, it’s still the same square we enjoy today in the heart of Madrid. It’s the same icon for Madrid’s locals and visitors, the place where we all bought our Christmas figurines. 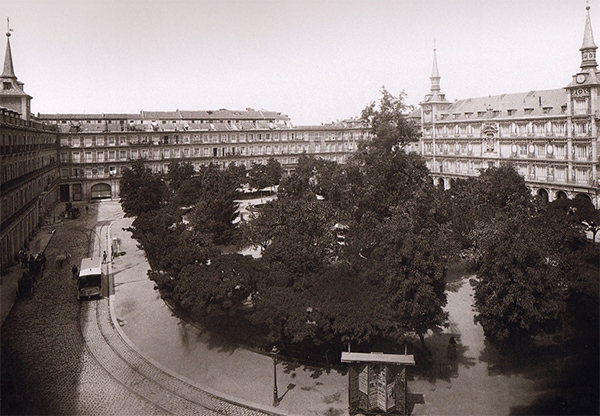 Many lives and legends surround the square. For four centuries, it has watched over the city of Madrid as the capital grows and transforms. Can you imagine how many secrets it holds? An arch in one of its most famous corners, the Arco de Cuchilleros, inspired Madrid’s sons and daughters to rise up against Napoleon’s troops, the seeds of the War of Independence. From a pulpit in this same corner (which can still be seen today), Brother Antonio from the Convent of San Gil took charge. You’ve probably gone right by a certain banister and “street,” one of the shortest and oddest in Madrid: Calle de la Escalerilla de Piedra.

Going up these stairs through the Arco de Cuchilleros, even on days when I was wearing my hardhat and boots – that made me feel like I was an intrepid adventurer in search of treasure. The legend of Luis Candelas, which may have been exaggerated by my parents, is engraved in my mind forever. This bandit lived in Madrid, and according to legend, he was one of those Robin Hood figures that we hold so dear. He would hide and escape the authorities through the network of caves under Calle Mayor that connected with the path of Cava de San Miguel centuries before the moat that surrounded Madrid. There are many stories about Luis Candelas, him running around and having love affairs in the Madrid of his day. Still, the story I remember the most was the one about those caves leading to Luis Candelas’s hidden treasure. That treasure was right under the horse! 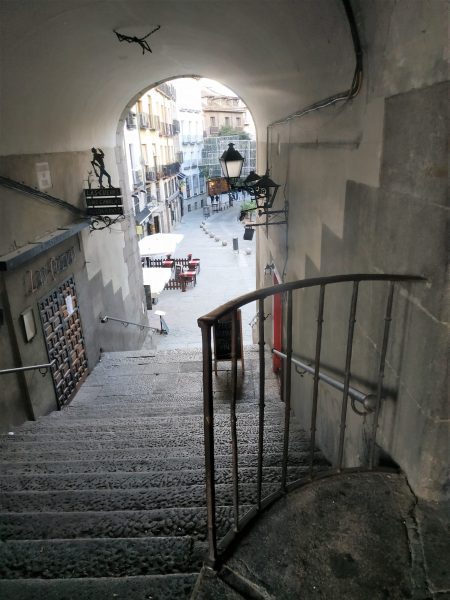 Luis Candelas was imprisoned and executed near Puerta de Toledo, with his famous last words: “Goodbye, my country, be happy.”

A century later, Plaza Mayor, like many other parts of Madrid, survived the Civil War unchanged, thanks to the structure made to protect it. This was the case for many of the monuments that have survived to this day. 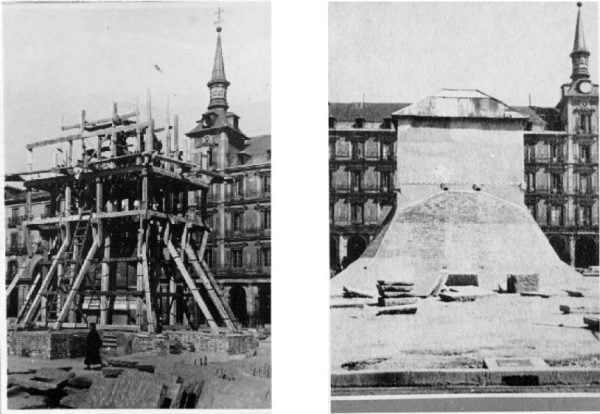 I quickly discovered that the equestrian statue of Felipe III didn’t stand atop a treasure but a parking lot – one that required excavating the square in the late 1960s. This would forever change the tree-lined image of the square. Under its arcades, though, there are still old brick vaults, the bowels of each of those buildings that surround and make up our square. They each have a story and are part of our history. Their archways have borne witness to the changes the centuries have brought.

Plaza Mayor has so many stories to tell, stories filled with anecdotes, fun facts, characters, and personalities. But best of all, more are born there every day. We already know some of them or will one day; others will be kept within its walls forever, known only to Felipe III and his horse.

The Plaza is part of my story, and any time I need a reminder, it is there. When confinement ended, that was the first place I went back to. I stood in the center under Felipe III’s feet, closed my eyes, took a deep breath, and thought, “Everything is alright. You’re still here. It will all be okay.”