A Building with 18 Looks: The Minds Behind the Puerta América Ho... 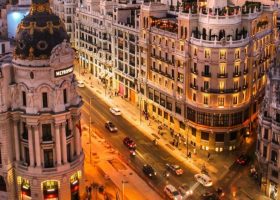 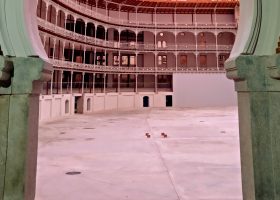 What is the Matadero? The Matadero is a former municipal slaughterhouse located in the Arganzuela...

The 12 floors of the Puerta América hotel, topped with a penthouse overlooking Madrid’s madness, could fit in anywhere in the world. The building combines the looks of 18 architects and designers across a single international team; each brought their own concept of comfort and luxury to every one of the rooms. The freedom of art materializes between these four walls.

The hotel, which was built by Ferrovial, pursues the idea of a multicultural building. Each floor, including the reception and the parking lot, bears the mark of a team of architects and the flourish of a great name. The façade, by French architect Jean Nouvel, is peppered with passages from Paul Eluard’s poem, “Liberty.” Inside is architecture from every corner of the planet.

“Architecture is frozen music,” said German artist Goethe. As you draw closer to Puerta América, the first score that rises into view is that of Jean Nouvel. The French architect worked on the façade and the 12th floor, making his mark on the hotel. There, he designed 12 suites along with photographers Araki and Fleischer, whose works on the human body and the Japanese tradition of the geisha adorn the walls.

Nouvel steers clear of conventions and tries to conceive each project free of any previous ideas or styles. He plays with light, shadows, and transparency on the 12th floor, an approach spanning all of his work. The award-winning architect (2008 Pritzker Prize) came up with this design that features a sliding panel system in each room so each guest can rearrange the space to their liking.

Mariscal and the colors of the 11th floor

One floor down, a cactus welcomes visitors as soon as they step out of the elevator. The sculpture is white, dotted with reds, yellows, blues, and oranges. This is one of the designs that has made Javier Mariscal‘s multidisciplinary studio famous. This is a preview of what’s to come: a happy plant designed to awaken the imagination, where colors play the lead role.

The hallways are decorated with other objects by Mariscal, keeping the experience alive on the way to the rooms. In each of the suites, the Valencian artist, along with Fernando Salas, highlights light and prints. Each room also has one side covered by a backlit wooden lattice, which is meant to give the feeling that the space doesn’t stop there – that the guest is outdoors.

Arata Isozaki‘s works seem to follow you with their eyes. The Japanese architect actually incorporates visual effects so that the shapes change depending on where the observer is. His style is further defined by the fusion of Western and Eastern elements and modern structures riddled with geometric shapes.

On the 10th floor of Puerta América, however, Japanese influence takes over. Isozaki, the 2019 Pritzker Laureate, designed an interior that was relaxing, balanced, and calm, with elements of the culture he grew up in as an artist. The wood paneling, the white marble floor, and many other subtle details transport us to Japan without ever leaving Madrid.

Gluckman Tang and the industrial touch

Yet another story down from this oriental equilibrium is the industrial minimalism of Gluckman Tang. The studio was founded by Richard Gluckman, and Dana Tang later joined. It is committed to simple structures that are devoid of superfluous elements, inspired by the industrial feel of its hometown: Buffalo, at the foot of Niagara Falls in New York.

On the ninth floor, the studio plays with the concept of a box within a box when organizing the space. In the corridors, industrial materials like aluminum, cement and glass take center stage; nevertheless, the wool carpeting that covers the floor offers comfort. Everything is arranged in boxes in the rooms, from the bathroom to the telephone.

David Chipperfield and the simplicity of luxury

Now, we’ll go all the way down to the third floor, where minimalism is once again the star – this time by David Chipperfield. The British architect doesn’t deny the influences that have come to him from other parts of the world. So it’s no surprise that this floor of Puerta América starts at an immense Murano glass chandelier. From there, a deep, dark corridor opens up, absorbing visitors until reaching the rooms.

Order, balance, and simplicity are at the core of each of these spaces, yet luxury permeates everything. The rooms’ floors are made from pieces of terracotta; the bench and headboard are made of leather. The colors, the geometric symmetry, and the simplicity of the elements invite one to simply rest.

We couldn’t end this short selection without mentioning Norman Foster, winner of the Pritzker Prize in 1999 and the Prince of Asturias Awards for the Arts in 2009. On the second floor of Puerta América, the Manchester architect (a representative of high-tech industrial style) aims to get away from the hustle and bustle of Madrid without leaving its urban essence behind completely.

Beyond the hall, with a statue of Zhan Wang watching over everything, glass walls with their own light dominate the space, lining the corridors and going into the rooms. Inside, the leather, oak wood, and simplicity strive for sustainability and tranquility in the spaces, as is the case in much of Foster’s work.

Beyond this handful of architectural inspirations, many other great names came together to build the Puerta América hotel. Kathryn Findlay (the eighth floor), Marc Newson (the seventh floor and the bar), Ron Arad (the sixth floor), Victorio & Luchino (the fifth floor), Eva Castro & Hoger Kehne (the fourth floor), and Zaha Hadid (the first floor) worked together to shape one of the most multicultural buildings in Madrid.