Since 2003, all the earthwork carried out at the Can Mata Landfill in Els Hostalets de Pierola (the province of Barcelona) has been subject to strict paleontological controls.

The site where this landfill is located is a particularly clayey area, which makes it very safe to use with its low permeability. However, the clays there come from the sedimentation of fines in flooded areas after major spillovers during the Miocene epoch. These spillovers dragged flora and fauna of that era with them; over time, much of it was trapped in the sediment and became fossils. In fact, as early as the first half of the 20th century, renowned paleontologists surveyed the area, occasionally finding rather valuable fossils.

How did we preserve this historical heritage site?

This discovery, and the fact that any fossil remains are considered historical heritage, meant that all future environmental authorizations for the site required strictly abiding by the relevant preservation laws. This forced the operator to carry out paleontological monitoring and, as appropriate, preventive excavations that would ensure the recovery of any fossil remains in the area.

Since this was a discovery of paleontological remains, the applicable legislation is decree 78/2002 of March 5, on the Regulation for protecting archaeological and paleontological heritage. This Catalan cultural heritage law is over:

1) Regulating archaeological and paleontological interventions, whether or not they are part of a research project; for the latter, distinguishing between preventive and emergency interventions.

2) Regulating how archaeological and paleontological remains are handled, focusing, on one hand, on storing extracted remains, and on the other, on handling non-extracted remains, which may consist of conserving them in situ, transferring them, or ultimately, removing them, always preserving cultural value.

3) Regulating the monitoring that the Ministry of Culture has to perform for any actions that may affect archaeological heritage sites, including large public works that must go through an assessment process for their environmental impact

In this case, the fossils were extracted by a team of experts as quickly as possible to protect them from the rapid deterioration that they would have undergone if left in situ, open to the atmosphere. If these archaeological remains are declared of cultural interest, the decision may be made to restore them onsite, halting the project indefinitely or even permanently. Since the findings at the Can Mata site are mostly fossils, this guarantees that work can continue alongside the paleontologists going about their tasks. 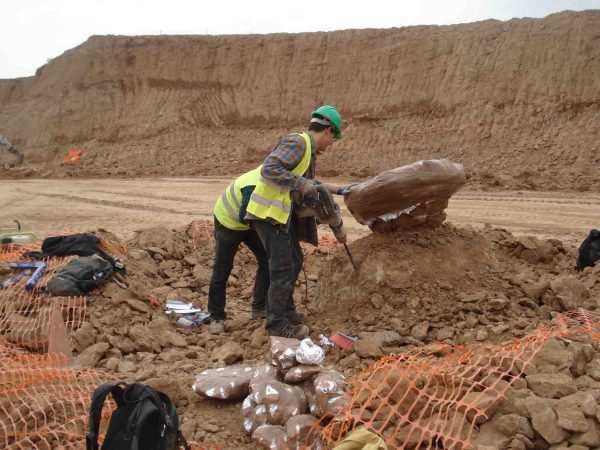 A site with the remains of prehistoric mammals

This landfill’s successive expansions have led to significant earthwork in building the cells that still exist today. A controlled landfill like the one in Can Mata is made up of cells where the waste will be deposited. These cells are usually built by excavating the natural terrain, and they’re properly prepared so that waste can be deposited in them. Under normal operating circumstances, one cell is being used (filled with waste), the next is being built, and some of those that have already been used are being closed off. At Can Mata, these cells are usually two to four hectares large.

The exhaustive paleontological monitoring that excavation has been subjected to has so far made it possible to recover and catalog more than 80,000 fossil remains, making the area one of the most important macro-vertebrate deposits from the Miocene in the world. It should be noted that, without the cells being excavated, most of these fossils would never appear or would be destroyed by the earth’s natural erosion.

Over the years, paleontologists have been able to classify fossils belonging to more than 75 different species of mammals, including horses, rhinos, deinotheria, sabertooth tigers, an ancestor of the giant panda, and what is believed to be the oldest flying squirrel found to date. 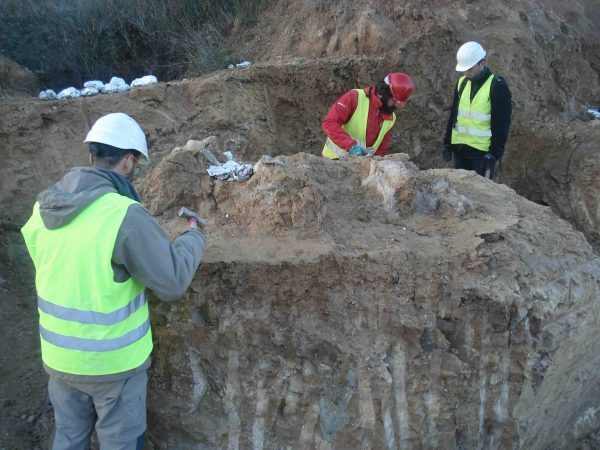 The remains of primates are something else entirely: among them are some considered to be of great importance, and work on them has been published in the most prestigious specialized scientific journals. The oldest upright primates known to date are apparently being found in this area. One notable example is the recovery of fossils from an almost complete specimen of a primate named the most modern common ancestor of Eurasian orangutans as well as African monkeys and hominids. The discovery of a new species christened Pierolapithecus catalaunicus was covered at the time in the journal Science.

What are geological layers?

Another special characteristic of the site is that the geological layers (rock strata that mark the different geological periods) flourish in this area. With its particular slope, fossils from different periods are found continuously as the cells are built, which has also made it possible to study the evolution of species in the area and even model the climate’s evolution in the area for the period covered by geological layers found onsite. This period ranges from about 12 million years ago up to about 10 million.

It should be noted, however, that, due to the vast number of fossils collected, only a small fraction of the remains found has been studied so far. This includes those that have been marked as being of major scientific interest during classification, labeling, and protective packaging. According to recent statements made to National Geographic by the heads of the Catalan Institute of Paleontology (where all of the fossil remains found at Can Mata are stored), based on what has been found so far, there is enough research work for three or four generations of paleontologists.