What does the oldest cable car in the world have to do with the remote control?

At a couple of points along the long border that the United States and Canada share, there’s an old cable car that crosses a physical line and an invisible line. Above the turbulent waters of Niagara Falls and its great 38-meter-deep whirlpool, the so-called Spanish Aerocar, or Whirlpool, has been in operation since 1916. The air shuttle is one of the attractions on the Canadian side of the famous falls, but what does it have to do with the remote control?

The history of engineering features several important dates at Niagara Falls. The construction of the first bridge over the river, which started with a kite, is one of them. But that hanging viaduct has long since ceased to be part of the site. However, the air shuttle continues to serve those who want to soar over the river, and it has become one of the oldest operational cable cars in the world.

On February 11, 1916, it completed its first trip. This way, a mode of transportation designed thousands of miles from Niagara became a reality. On that first journey, Gonzalo Torres and Polenco Antonio Balzola were on board the cable car, representing the company that had brought the invention to life: the Niagara Spanish Aero Car Company Limited. But the engineer behind the invention, Leonardo Torres Quevedo, was missing from the group.

It would still take several months for the Spanish Aerocar to start operating regularly, as it would in August of that year. Since then, the cable car hasn’t stopped running as long as the weather permits (it is closed to the public during winter). Although it has undergone several renovations – in 1961, 1967, and 1984 – it remains faithful to Torres Quevedo’s original design. 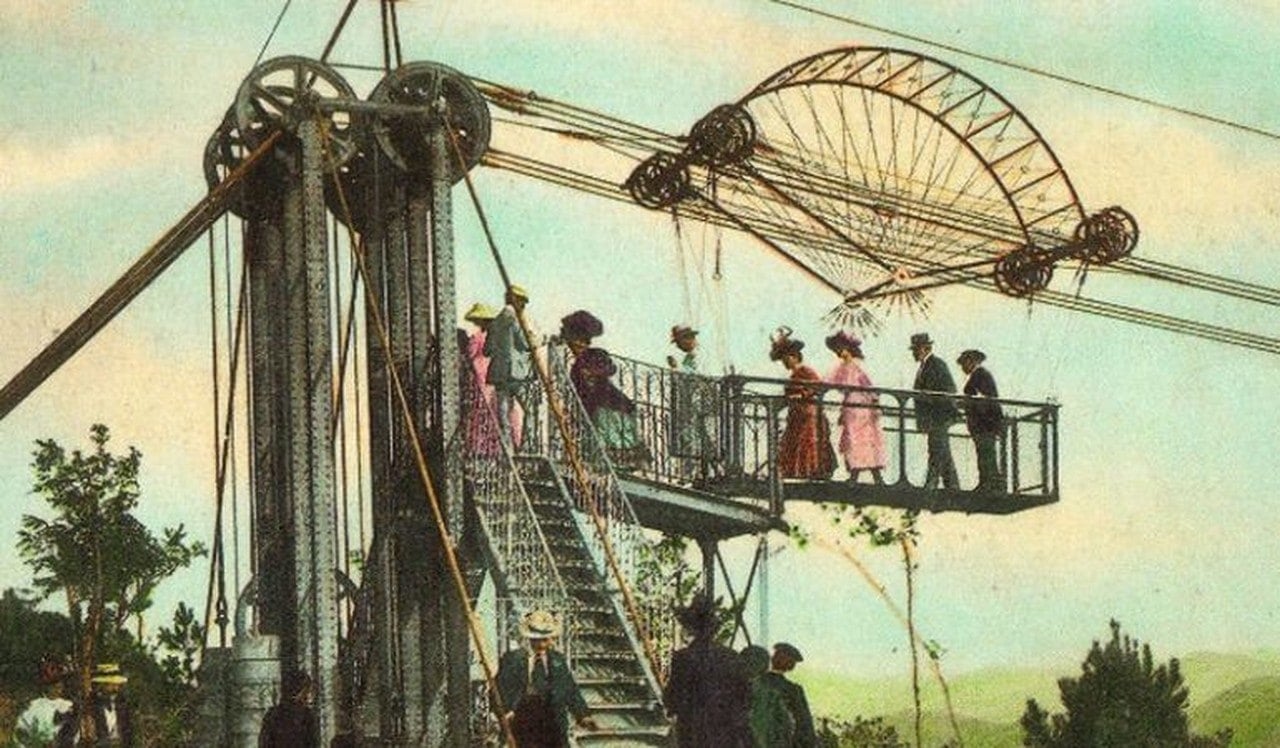 Along 539 meters over Niagara, reaching a maximum height of 61 meters, the cabin hangs from six interlocking steel cables, each 25 millimeters in diameter. The car, which was initially uncovered but is now completely enclosed, is powered by a 50-horsepower engine. It reaches a speed of seven kilometers per hour or just over 4 miles per hour.

The system is capable of moving about 40 people standing up. And though it crosses the border twice over its 539-meter route, the cable car actually connects two points in Canada. It may not seem like it, but all this makes its connection to the remote control a little clearer.

Torres Quevedo’s career did not begin or end in Canada. In 1902, 11 years before starting the design of the Niagara cable car, the inventor patented two technologies in France: one to perfect airships and the other to handle them at a safe distance and thus carry out all kinds of tests safely.

Thus was born the telekino, an invention that would far exceed airships’ popularity. As the Institute of Electrical and Electronics Engineers (IEEE) recognized in 2007, the grandfather of the remote control and similar technologies had been born. After months of laboratory testing, it was time to test it in a real land-based environment. To do so, Torres Quevedo chose a well-known setting and a tricycle.

The Beti-Jai fronton, which opened in 1894 and was recently restored by Ferrovial, had many uses throughout history. One of the least known was as the headquarters of the Aeronautical Testing Center from 1904 to 1906. The center was essentially created so that Torres Quevedo could put his inventions to the test. And so, in March 1905, before the teachers and students of Madrid’s School of Industrial Engineers, remote control of a land vehicle became a reality. 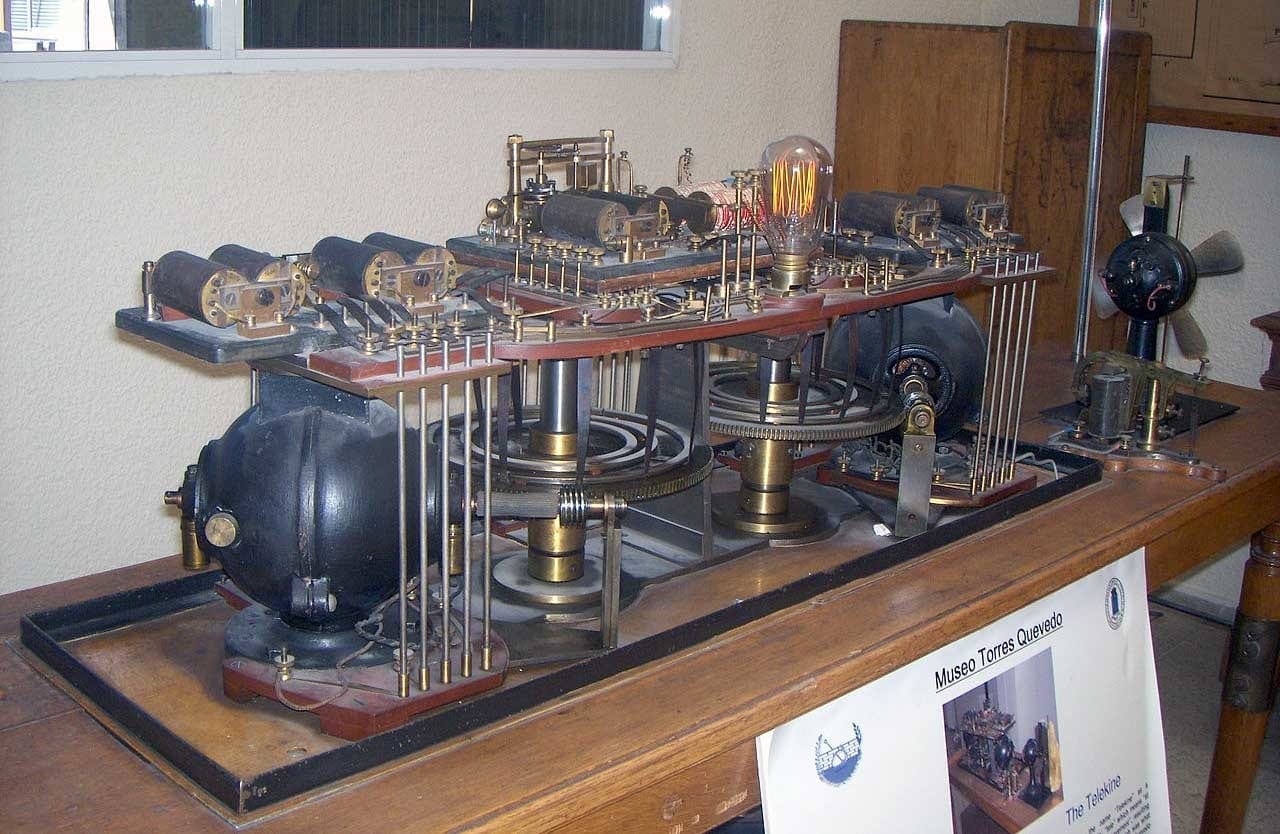 As reported by the IEEE, Torres Quevedo was able to move the tricycle back and forth and make it change direction by sending commands from a wireless telegraph transmitter from a distance of about 30 meters. Later on, there were other demonstrations with a small boat in the Casa de Campo pond in Madrid and a boat in the Bilbao Abra.

By 1906, he began to apply the telekino to his real goal: being able to test improvements in airship designs safely. And it worked. His airship was developed successfully, and more than 100 units would be operated in World War I by the armies of France, the United Kingdom, Russia, the United States, and Japan, mainly for inspection tasks.

By the time he got down to business with the Niagara cable car, the remote control was already a well-known technology around the world, and Torres Quevedo’s fame preceded him. It was in those years that the engineer also patented several mechanical calculating machines, considered precursors of computers. One of them, the chess player, became the first video game in history – or at least, its most recognized ancestor.

The last years of his life saw all the formal recognitions arrive. A member of the Royal Spanish Academy and president of the Spanish Mathematical Society, he was also presented an honorary doctorate by the Sorbonne and made a member of the Paris Academy of Sciences. He died in Madrid in 1936, just before turning 84. There, on the street Válgame Dios, he is still remembered as one of the illustrious residents.