The world has had a facelift many times in recent centuries. Successive industrial and technological revolutions have reshaped how we organize, work, and interact; cities haven’t been untouched by this change. However, traces of other times are still hidden in the walls that support the modern world. Today, one building that seems to float in midair tells the story of a city that boomed thanks to coal.

The year was 1899. The Central Eléctrica del Mediodía power plant was being planned on the site of the old La Estrella spark plug factory. Alongside architect Jesús Carrasco y Encina and engineer José María Hernández, who was in charge of the heavy machinery, businessman José Batlle was beginning to make his dream of bringing the then-modern thermal energy of coal to the streets of southern Madrid come true.

The capital of Spain had just surpassed half a million inhabitants, but in the coming decades, it would step on the accelerator. By 1930, when the Central del Mediodía was about to close, the city would have tripled its population. But let’s go back to the turn of the century.

The coal cellar and the granite baseboards

After three years of construction, the plant went into operation in 1902, occupying most of a plot of almost 2,000 square meters defined by what are today the streets of Gobernador, Alameda, Cenicero, and Almadén. With its large coal cellar and vast water tanks for cooling and steam generation, the plant was structured in two parallel naves made of solid brick with a granite base.

With its gabled wooden roofs on steel trusses and a skylight in the center that allowed for overhead lighting, the building soon became the magnificent standard for industrial architecture in Madrid. To this day, it is one of the few surviving examples of this architectural trend in the old part of the city. Only there are no traces of soot inside.

For three decades, the plant supplied electricity to the entire southern sector of central Madrid. With its three steam boilers, three 120-horsepower horizontal steam engines, and three 80-kW old-current dynamos, it remained operational until 1930 under the control of the capital’s Unión Eléctrica Madrileña. After lying abandoned for a few years, it became the property of ONCE, Spain’s National Organization for the Blind, which was founded in 1938. 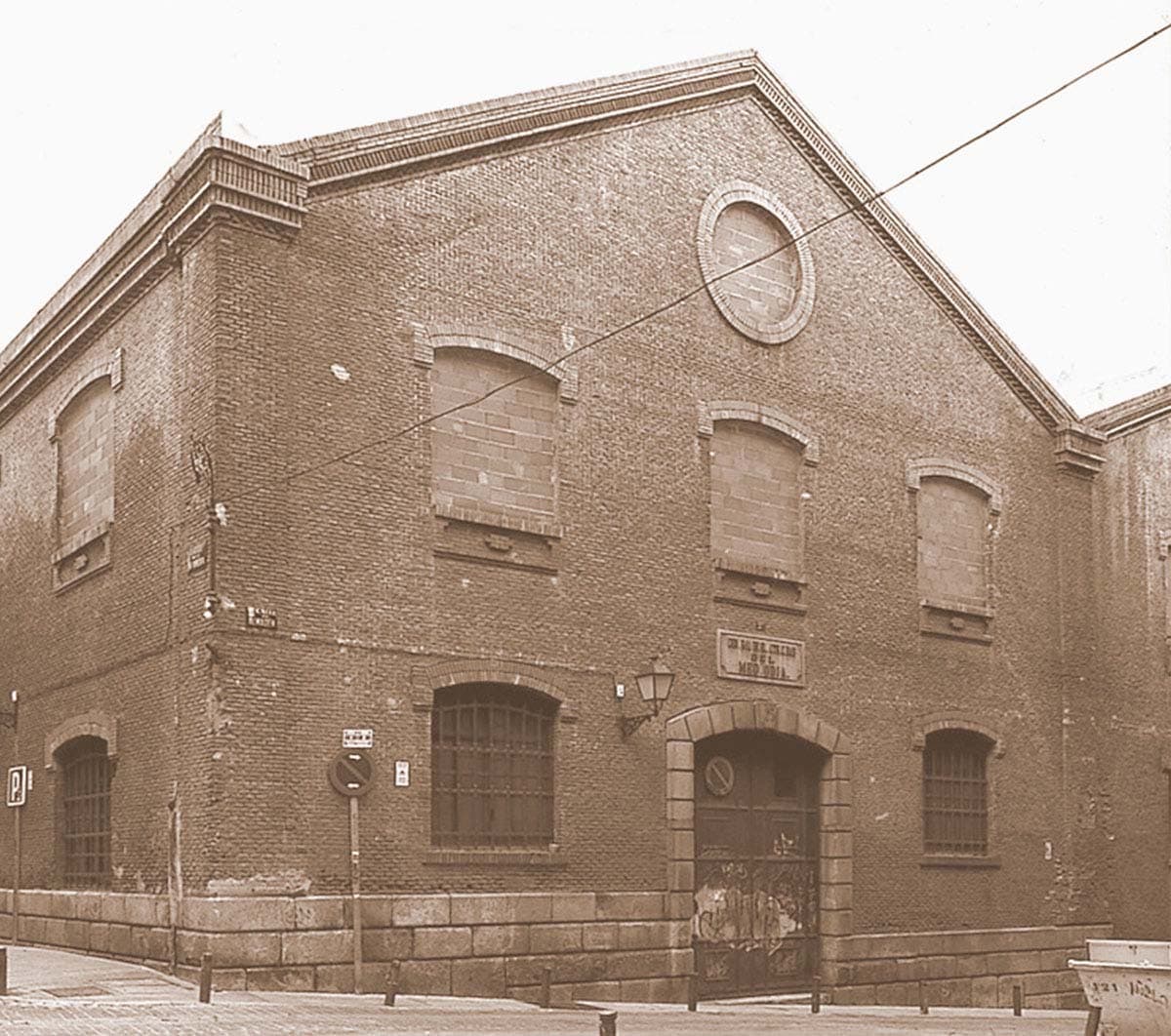 The Central del Mediodía didn’t fully occupy the 2,000 square meters of that plot. Industrial activity inundated every nook and cranny, but there was still room for a small plaza. Today, the public space has grown, and that small area spreads over more than 2,500 square meters. Looking right at the Botanical Garden, it just touches the Paseo del Prado.

The ground in that square hardly remembers the comings and goings of coal a century ago. It is covered by a structure of concrete triangles that form planes at different inclinations. The same design is mirrored in the roof covering part of the square, which is also bathed by two ornamental fountains. But the star here isn’t any of these elements: it’s a vertical garden that stands 24 meters high.

The Central Eléctrica del Mediodía’s building needed a major renovation when La Caixa bought it in 2001. The idea was to turn it into the headquarters for CaixaForum Madrid, a space for culture and outreach managed by the bank’s foundation. The square’s redesign revolved around the vertical garden by Patrick Blanc, an innovative French botanist who was an expert in tropical plants.

By the time he was to decorate the plaza for CaixaForum Madrid in 2008, Blanc was already an expert in vertical gardens. This particular one spreads across 460 square meters of surface area; from it hang 15,000 plants of 250 different species that survive without soil, only water and nutrients. 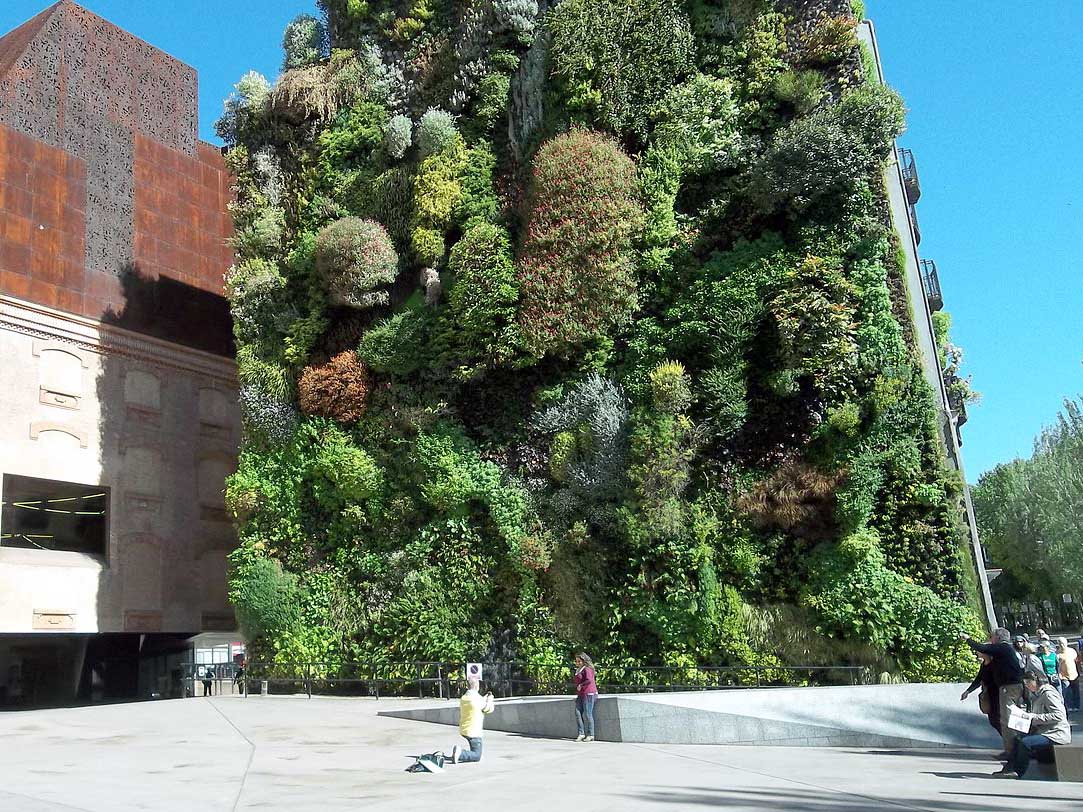 And a floating building

Despite the modernities that surround it, the old power station still has its industrial appearance. Brick walls survive today, but they are not supported by the sturdy granite plinth of yesteryear. The Swiss architects in charge of remodeling the building, Jacques Herzog and Pierre De Meuron, decided to remove it and lower the height of the floor. This makes Madrid’s industrial past seem suspended in midair today.

The plant’s facades are, however, almost the only vestige of the 19th century. The interior has been entirely remodeled by Ferrovial Construction. Height was added to the building with a state-of-the-art steel module, and new levels have been built underground, including a space for the auditorium.

Inside, open spaces predominate, and the different areas and floors are connected by two unique staircases: a circular, white one connecting the lower spaces with artificial light with the naturally lit areas, evoking the New York’s Guggenheim; and a steel stairway located in the upper part of the building.

Otherwise, photography, archeology, design, and art steal the show. The space takes a close look at its older siblings, which surround it to form the so-called triangle of art: the Reina Sofía National Museum Art Center, the Thyssen-Bornemisza Museum, and the Prado National Museum, a memory of a Madrid predating coal and electricity that was starting to lean into the enlightened world.