Ruina montium: how water was used for digging in the time of the Romans

Water’s power it is one of the most impressive forces of nature. Water falling under the force of gravity has dissolved mountains, toppled cities, and leveled critical infrastructure. However, it has also boosted entire civilizations with its energy, helped us cultivate efficiently, and served as a key part in mining for gold with the Roman technique of ruina montium.

One of the most impressive examples of this technique was employed in Las Médulas, the largest open-pit gold mine in the Roman Empire and today a World Heritage Site for its implications on human history. With the help of channels measuring dozens of kilometers, ruina montium made it possible to use the land. It also gave rise to the forms seen today.

Ruina montium was a mining technique used since Ancient Rome, before even the Republic or the Empire. It is an engineering method where the force of water is used to collapse large sections of a mountain and thus make it possible to extract the minerals it contains.

To understand the impressive force of water, you simply have to go to a hydroelectric power station and observe the speed at which the water runs when it is released from high altitudes. Potential energy is released in the form of kinetic energy. Cutting metal with pressurized water demonstrates that high fluid velocities makes it possible to divide matter. 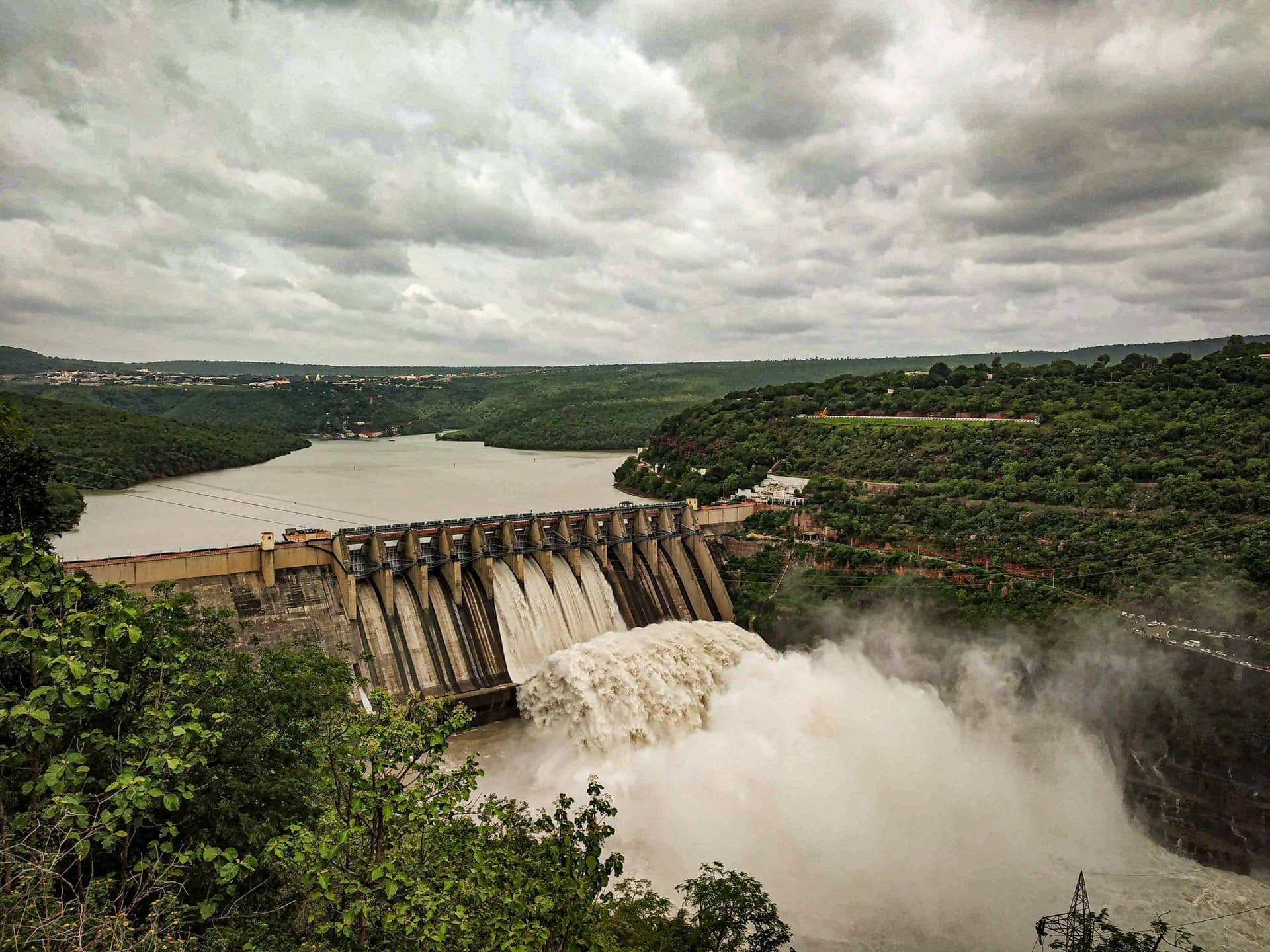 How the Romans tunneled their water mines

Unlike a sheet of metal, a mountain has considerable mass and dimensions. No water jet could pierce it in commercial times, so the Romans came up with an interesting idea: weakening the mountain’s structure by carving galleries from inside.

The porousness of a body determines the resistance it will put up to a certain force before breaking. This is precisely why older people’s bones break more often, why honeycombs that bees make underground sink when stepped on, and why it’s not a good idea to drill into a beam. Hollows weaken the structure.

According to Hooke’s law, the resistance of an element is reduced as its section is reduced, and digging caverns using classical techniques (picks and shovels) makes the mountain able to withstand less and less weight before collapsing on itself. That ‘weight’ is water, but water in motion.

The force of water in ruina montium

The Romans discovered that water’s power was greater when it was released all at once. Instead of filling the galleries with water, an element less dense than the soil, what they did was build huge pools of water above the caverns. Once these were built, they opened their floodgates.

The image above shows the cut of several galleries in a mountain. As can be seen, none of the galleries faces the outside. The reason? They were after the water hammer effect, which is what’s behind the sound the tap makes if it is shut quickly. This causes the pressure to increase instantly.

This is how the mechanism worked. The water would flow down at high speed inside the galleries, but since it had no exit to the outside and the water was a non-compressible fluid, the water stopped suddenly when the gallery was filled. This hard braking is what produces the high-pressure wave that ends up collapsing a mountain that had already been weakened.

Leonardo Da Vinci is credited with the phrase, “Water is the driving force of all nature.” Although incorrect considering current physics knowledge, there is no doubt that water is capable of exerting considerable pressure. Two millennia after the Romans exploded Las Médulas with water pressure, the Piccard bathyscaphe was submerged at 10,000 meters with its walls measuring 13 cm thick. The pressure was 1,196 kilograms per square centimeter.

The Romans used the water hammer to create similar conditions inside the mountain. The result is a controlled collapse which gave rise to a mountain of earth from which it was very easy to extract metals such as gold. It was not necessary to dig in it because the water wasn’t responsible for crushing the mountain. But where did the water come from, and how did they get it to the top of the mountain?

To build pools on mountains, the Romans had to perform engineering works over dozens of kilometers. The following images show a cross-section and overview of the layout of the longest channel of Las Médulas for filling the regulation tank that made it possible to use the deposit. The reservoir housed 18,000 m3, which filled slowly and was released in a matter of seconds. 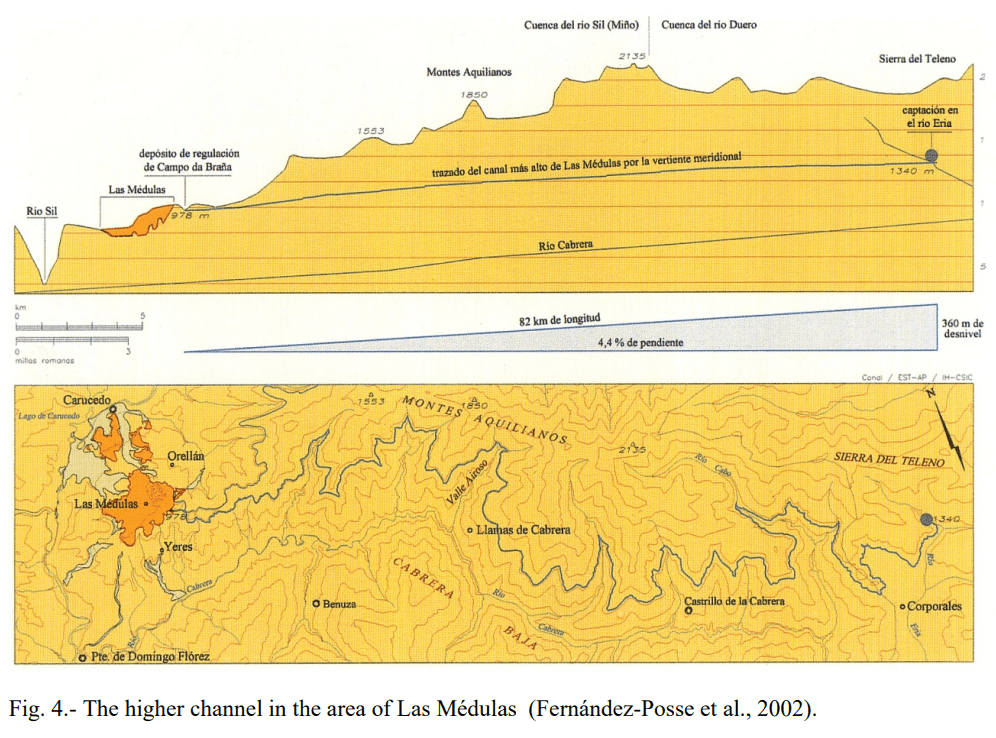 Transporting the water took an enormous workforce and the modification of numerous slopes on which walls, channels, and pressure ducts were built to move the liquid. The Romans not only shaped Las Médulas by ‘dynamiting’ the mountains.

They also modified numerous mountains and valleys nearby. They reclaimed mountains, did excavations, filled sediment pits, blocked rivers, and covered entire valleys with leftover mine waste. After 250 years of use, the Las Médulas region is not the same as before Rome.