One of the most vulnerable groups are elderly people, who have the most problems when crossing a street. Their average speed is around 0.9 m/s for men and 0.8 m/s for women (younger people can easily walk at a speed of 5 m/s). Zebra crossings intended for connecting the different urban islands we call pavements are a mobility barrier for them. 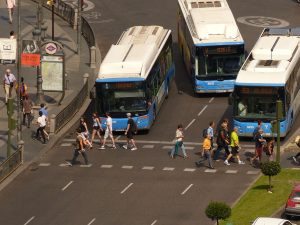 But, thanks to technology, some amazing solutions are being developed, including an app which doesn’t even need to be installed on our smartphones and enables pedestrians to ‘book’ their turn to cross, by stopping the traffic and ensuring people get safely to the other side of the road.

This is especially useful for older people, who do not often use smartphones. The programme has been installed successfully in traffic lights throughout Spain and other countries and has helped people maintain a healthier relationship with their own city, encouraging people to walk.

How does the device work for smart cities? 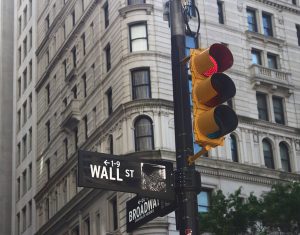 A pedestrian walks down the street along the pavement and decides to cross to the other side. So, he walks up to the device which will allow him to do so. It’s a user-friendly interface which can be used with just one hand (with just one finger, really), so no need to let go of your mobile phone if you’re using one.

After a short wait, the traffic light to which the device is connected will switch to yellow and, three seconds later, the pedestrian gets a visual or sound signal, indicating that he can now cross safely. State-of-the-art technology.

Yes, obviously, we’re joking. This is an invention that has been around in our cities for years, and which generally uses the words PRESS to ask us to book our turn to cross, and then WALK or DON’T WALK, depending on when we can or cannot cross the street.

It’s all inside the ubiquitous little box attached to traffic lights to allow you to cross, so that the traffic light will only go red for vehicles when a pedestrian is waiting to cross. We have got so used to this little device that we no longer give any thought to all these initiatives that save lives in cities every day.

We’re very often blind to technology and fail to see solutions in our cities that make our lives easier.

We tend to look to the future, waiting for new developments on smart cities, without realising that the buttons for requesting your turn to cross at a traffic light, together with the acoustic signals emitted, are an excellent example of such developments. When we used the words application or device, many readers will automatically have thought of their smartphones. 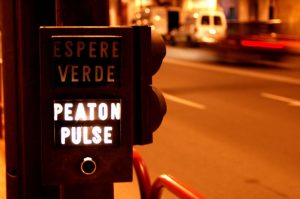 We don’t like traffic lights, whether we are drivers or pedestrians, because more often than not when we come up against one we have to stop and wait a few seconds to give way to others. They are, however, one of the pillars of road safety training and behaviour in modern cities, a technology that ensures social stability like few others can.

Which is why Ferrovial Services, together with Plymouth City Council and the Centre of Excellence for Cities, trialled a technical improvement which allows traffic lights to ‘see’ approaching pedestrians using Artificial Intelligence.

Design of the world’s first traffic light is credited to John Peake Knight, an engineer specialising in railway signals, and appeared in 1968 in the UK. That’s already 150 years ago! Knight had been directing trains on different tracks using gas lights, colours and whistles, but one day he went a step further.

He approached the Commissioner of the Metropolitan Police and proposed using a signalling system on the streets of London. Three years later, the first traffic lights were installed at the junction of Great George Street and Bridge Street. It was a huge success. Technology has obviously moved on since then, but we still haven’t found a better way of assigning priority to the different mobilities.

Today we would see this as a rudimentary invention, yet our cities are full of different versions of it – and the truth is that they deal with traffic better than anything else that has ever been tried. Today, a plaque marks the location at which that first traffic light helped to manage road mobility. 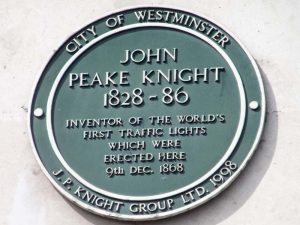 When we talk of mobility we tend to think of cars, but this is not the only mobility that has to be managed, often without using highly advanced technological applications. Again in the UK, this time in Liverpool, retail chain Argos ‘installed’ a fast-track lane on the pavement to help overcome people’s frustration at not being able to advance quickly.

Statistics show that 31% of pedestrians feel frustrated when having to walk at low speeds to avoid dawdlers, elderly people, people carrying a heavy load, or parents pushing prams. These people would benefit from a fast track lane, according to The Guardian. And the magic of this? Just as in the case of the box for booking your turn to cross the street, it doesn’t need to be installed on your phone and it is easy to use.

We saw a similar example in China years ago, where a special lane for phonebies (phone + zombies) – pedestrians walking with phone in hand – was provided. Text walking lanes were successfully introduced in Antwerp (Belgium) and now help to manage mobility.

Closer to home, Madrid’s saturated city centre saw pedestrian one-way streets for a few days over the Christmas period in 2017, in an attempt to avoid agglomerations getting worse. As if they were car lanes, pedestrians could only walk in a certain direction.

Traffic lights, devices to request permission to cross, and different types of pedestrian lanes. Sometimes, the technology required to provide city access to a certain group can be something as simple as line painted on the ground, although our mind is always thinking of more devices and more technology.