A Vertical Maze and a House of Cards: 11 Amazing Structures for Guinness World Records Day

The first Guinness World Record ever was made by a plover. This bird, the fastest hunting bird in Europe, doesn’t actually even hold the record of being the first record. But it did inspire Hugh Beaver, CEO of the Guinness Brewery, to start what is now the largest collection of records and feats on the planet back in the 1950s.

One day in November 1951, Beaver realized that he had no way of verifying what bird was the fastest in Europe. The Guinness Book of Records (now the Guinness World Records) was born from that need and curiosity in 1955. That first edition put an end to centuries of unanswered bar debates. And he opened the records up to all kinds of quirky exploits and amazing structures that would compete with each other.

Today, there are more than 47,000 titles held in the Guinness World Records. Many of them have no challengers. Yet many more are surrounded by debates and tests among various candidates. To celebrate this Record Day, which has taken place on November 14 since 2002, we’re going to go over the most amazing structures on the planet (with the Guinness seal).

To start, a handful of bridges

Bridges that cross kilometers of water, fly over the clouds, cantilever bridges that stop traffic to split in two, bridges that become tunnels and tunnels that become bridges. Metal, stone, wood, and concrete bridges.  Viaducts – symbols of human engineering – have been breaking records for thousands of years. To them, impossible is nothing. 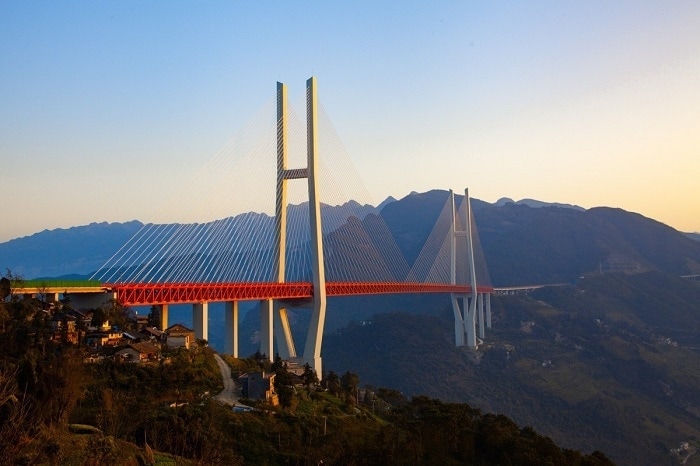 Duge Bridge is, to this day, the tallest bridge in the world | Wikimedia Commons

That’s why Guinness World Records is crawling with bridges. The longest in the world, for example, is the  Danyang-Kunshan Grand Bridge in China, which spans the Yangtze River for 164.8 kilometers. And before leaving that country, the tallest bridge in the world, the Duge Bridge, rises 565 meters over the Beipan River.

The record for the widest cable-stayed bridge was recently broken. On May 15 of this year, the 67.3-meter-wide viaduct Rod El-Farag Axis in Egypt was registered with the Guinness World    Records.

The biggest house of cards 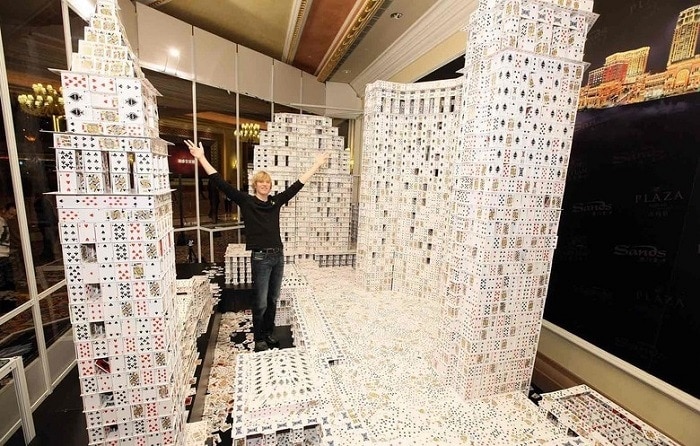 Bryan Berg spent 44 days setting up the 218,792 cards that made up what is to date the largest structure made with cards in history: a replica of three luxurious hotels in Macau, China. The record was certified on March 10, 2010 and has not yet been broken.

And the world’s largest sandcastle

This one didn’t take 44 days but two years of fruitless attempts. But at last, the Sand Skulptern Festival in the German town of Binz got what it wanted: the largest sandcastle in the world. The structure, developed by the company Skulptura Projects, rises 17.65 meters off of the ground, and the circular base is more than 26 meters in diameter.

To shape the more than 11,000 tons of sand with no internal structures or binder substance, it took 12 sculptors and eight technicians from Russia, Poland, Hungary, Germany, the Netherlands, and Latvia working together for almost four weeks. 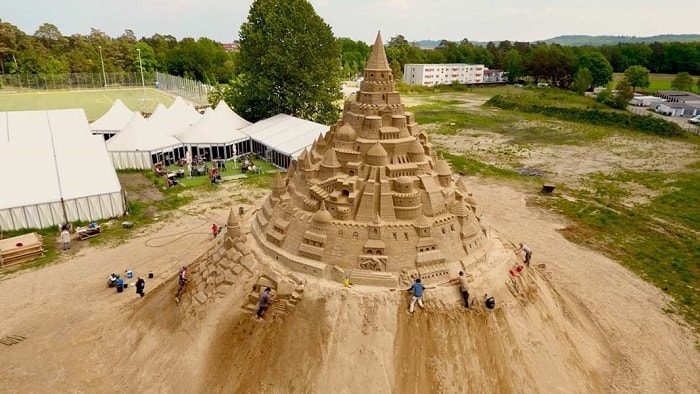 The surface equal to 30 tennis courts made of glass and steel suspended in the air, without any intermediate support points. 8,073 square meters of transparent roofing that is only attached at the perimeter. This is the structure that earned the MGM COTAI strip in Macau, China, the world record.

The biggest chess piece on Earth

No one would say that a chess piece is a structure worth being honored. Normally, it is their material or craftsmanship that makes them valuable. But if we’re talking about a king over six meters high made of wooden blocks, that changes things. The world’s largest chess piece, built in Saint Louis, Missouri, U.S., has been in the Guinness World Records since August 2018. 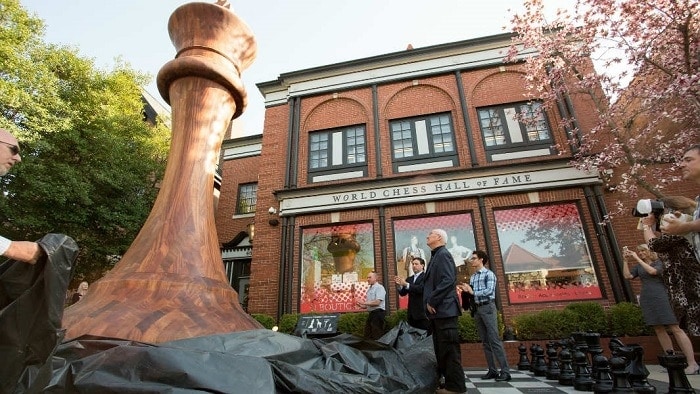 The piece is at the entrance to the World Chess Hall of Fame in Saint Louis. | Guinness World Record

From 12.27 meters up, a ton of liquid chocolate cascades down. Willy Wonka’s factory has come to life, at least partially, in the Austrian town of Allhaming. There, the world’s tallest chocolate fountain was built. In case chocolate isn’t to your taste, we can always keep looking through the Guinness records. The longest tiramisu in the world and the tallest cupcake tower on the planet are there, too. 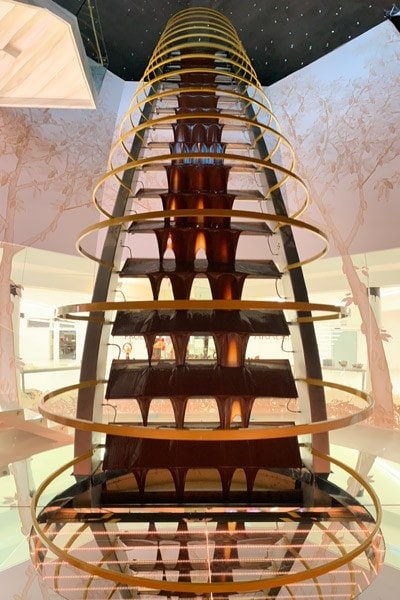 The fountain is a project done by the confectionery and chocolatier Confiserie Wenschitz. | Guinness World Record

The tallest building and the building with the biggest vertical maze

We couldn’t leave one of the classic records off of this list – a record that had not ceased changing over the last few decades. Nevertheless, this record hasn’t been broken since January 4, 2010. The Khalifa Tower in Dubai has been the tallest building in the world since then. At 828 meters high, it surpasses Shanghai Tower, number two on the list by 200 meters. 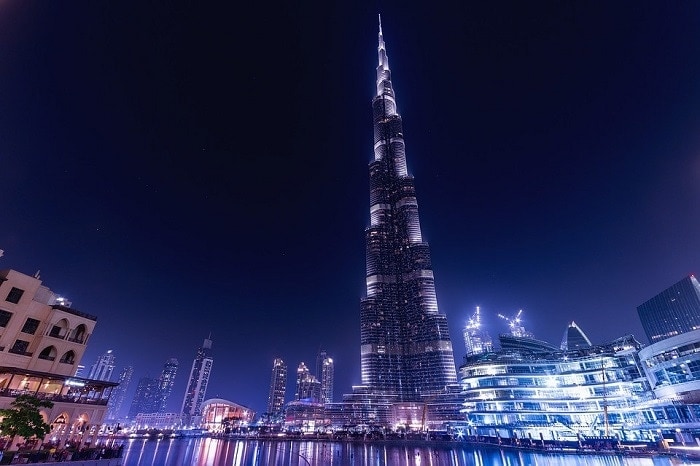 In the coming years, the record will change hands again. The Jeddah Tower in Saudi Arabia will exceed it in height when it opens in 2021. However, another building record will remain unphased: the one held by the Al Rostamani tower in the United Arab Emirates. The largest vertical maze on the planet spreads across its facade. The nearly 4,000 square meters of the maze can’t be used. But that’s the record.

The longest road (in winter)

Disputes over which roads are longer, more curvy, wider, or higher (here are, for example, the mountain passes in the Tour de France) are a dime a dozen. But we certainly couldn’t go without mentioning roads in this post. The world’s longest winter road is built every year between Gillam, Manitoba, and Peawanuk, Ontario, both in Canada.

Every January, after the snow has fallen and the ice is as hard as rock, the 752 kilometers of the so-called  Wapusk Trail are built.  This is an icy road that gives vehicles access to the remotest villages of the Hudson Bay. When March arrives, temperatures start to rise and the road closes. During the rest of the year, these locations are only accessible by plane or helicopter.