A History & Hypothesis of Human Height 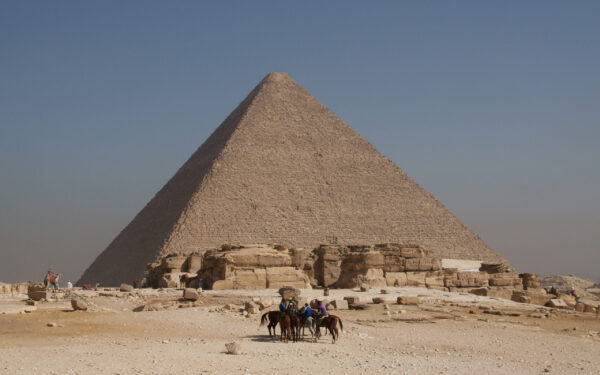 The Pyramids of Giza are rightly considered a wonder of the ancient world; they are after all the only ancient wonder still standing in modern times. The Great Pyramid was built for the Pharoh Khufu in 2540 BCE and upon completion, after twenty-seven years of hard work, is said to have stood 146.7 meters tall. Admittedly, the smooth limestone casing and golden caps that adorned it originally have been stolen over the millennia, so it has lost a little height in its old age (down to 138.5m). Nevertheless, this was the highest humanity built until 1311 after more than 3,800 years of holding the record.

It is little wonder then that so many on the internet attribute extraterrestrial intervention to them. But the truth is that these structures exploit some pretty useful physics to achieve their height. The fact is that pyramids, as a structure, give you the most stability for the least material. If you have ever made or seen a pile of something (be it sand on a beach or soil in a garden or even emptied LEGO bricks on a floor) you will probably notice that it tends to form a vaguely conical mound, with every individual part above supported by multiple parts below and each of those parts supported by multiple parts until you reach the ground. It is a very high-entropy structure, therefore it forms naturally, with little interference. Things collapse into approximately conical piles like this, the same way that sand piles up in roughly conical dunes in the desert. Flatten the four sides of a conical pile to form a square base and you have a pyramid. 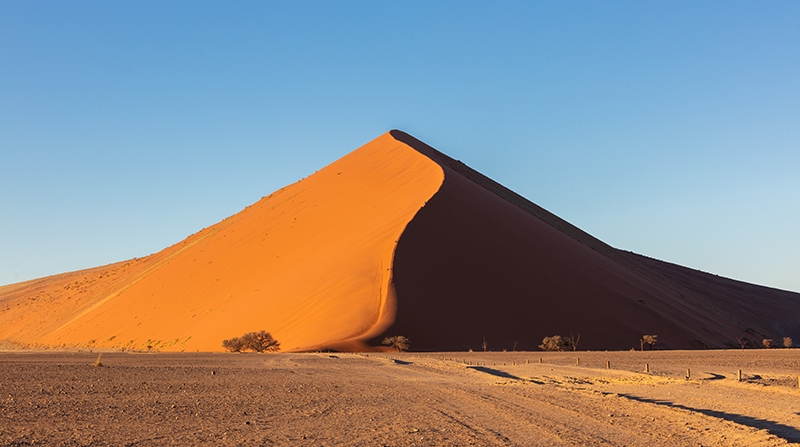 You can even see this play out in the distribution of a pyramid’s materials: You use the biggest and strongest stones for the base, effectively creating a solid foundation for the next layer. You use two-thirds of the stones by one-third of the way up. By the time you reach half of the height of the pyramid, you have placed more than eighty percent of the stones. Obviously, it is more complicated than that; there are chambers cut into the pyramids etc., but this is the basic principle.

So, we have established why the Pyramids are so impressive, but also how it is they have stood for so long. However, if height is your only goal, pyramids are inefficient, as we saw earlier with the materials. By this author’s calculations, the Great Pyramid had a surface area to height ratio of 342:1, meaning that for every meter you wanted to build up, you had to cover three hundred and forty-two meters squared of ground. A Burj Khalifa-tall pyramid (828m) by this measure would cover nearly 28 hectares, by this author’s calculations.

Additionally, the Pyramids do not qualify for the title “building”. To be a building, fifty percent of the floor plates have to be space useable for and by humans.

Cathedrals and church towers inhabit a semantic middle ground, where the lower parts of the structure are regularly used by people, but the record-breaking towers and spires are not. Nevertheless, probably because of their holy status, they are accorded the moniker of “building” and the first to exceed the Great Pyramid’s record was Lincoln Cathedral’s Spire in 1311. 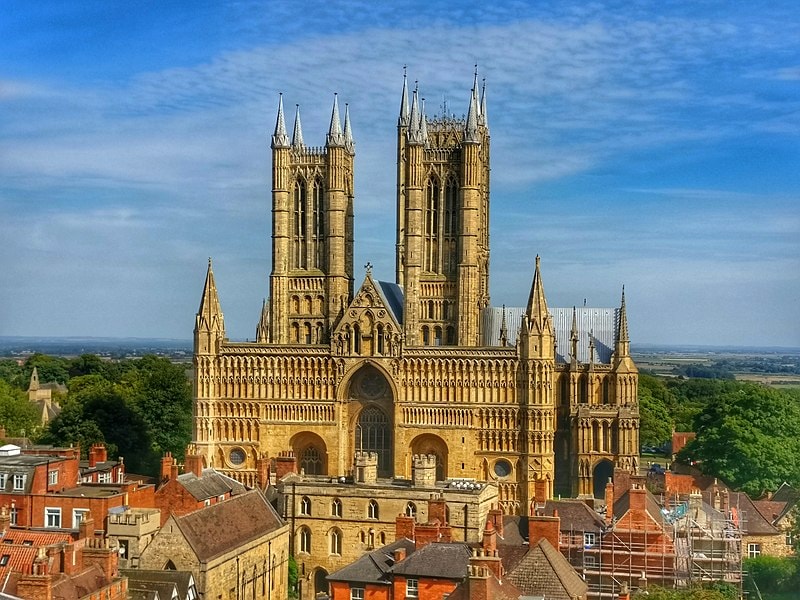 This greater efficiency of these structures comes at a cost. You will notice, looking at a list of these record-holders, that they took many hundreds of years to complete, compared to the supposed twenty-seven years of the Great Pyramid. You might also notice, prior to the invention of things like reliable steel and reinforced concrete,  that these structures had a propensity to collapse in storms or burn down, meaning that the award for highest structure jumped around quite regularly over the following five centuries.

It is only when steel became a reliable, reasonably-priced, and readily available material (as a result of the Industrial Revolution), that we see the evolution of tall buildings into something that we can recognize today. The records set tended to be more linear too.

Within the years 1930-1931 the world’s tallest building was built three times in New York City – the 282.5-meter Bank of Manhattan, the 319-meter Chrysler Building a few months later, and then 11 months after the Empire State Building at 381-meters. The Empire State Building demonstrates much greater efficiency in terms of surface area to height ratio (17:1 approx).

One potential exception to this linear progression would be the building of broadcast towers, which broke the record for tallest structure frequently (at a surface area to height ratio of near 1:1 if you ignore the support cables) but do have a slight propensity to collapse. The most famous example is the Warsaw Radio Mast, only reigning supreme from 1974 to 1991.

Leaping to the modern-day, the Burj Khalifa at 828m, the largest building AND structure in the world, has a surface area to height ratio of close to 10:1 (referencing its raft foundation of 8,000m2) and has 309,473 m2 of floor space to be utilized. But even this and others like the Shard in London have a somewhat pyramidesque tapering quality to them, albeit at a much greater incline.

Push It to the Limit

But is there an upper limit? In 1997, Martin Pascoe designed the X-Seed 4000 concept megatall skyscraper for Taisei Corporation, a four-kilometer part-Eiffel tower, part-mountain that would be built into the sea and house between five hundred thousand to one million inhabitants on 800 floors. This is far from the only such suggestion, but all would exploit the pyramidesque tapering structure mentioned above. 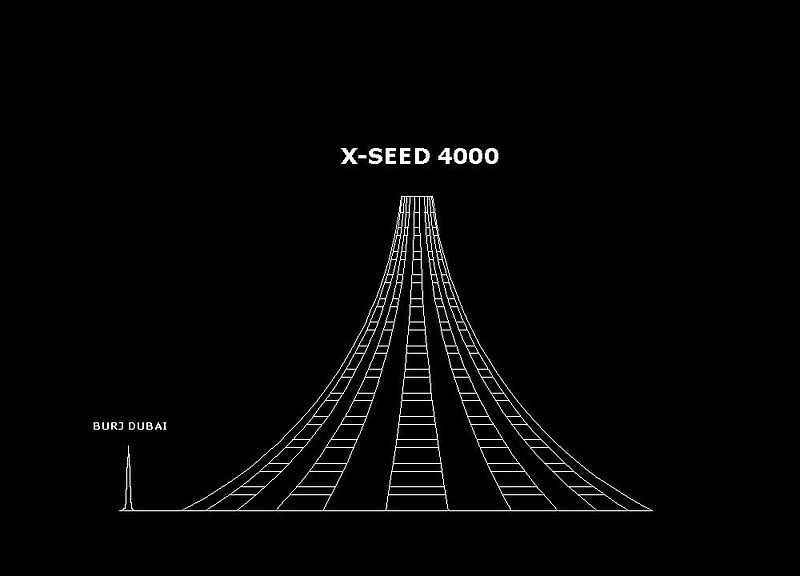 The consensus from architects such as Adam Smith and William Baker (of the Burj Khalifa) seems to be that such buildings, that exist under compressive stress, could be made to exist. We could have one up to one meter higher than Mount Everest certainly, or (more hypothetically) given that the Burj Khalifa is 85% air, something approximately 6.7 times higher than Mount Everest, without crushing the Earth’s crust beneath it.

Ultimately the main limit on such buildings is based on practicality: Where will you find enough materials? Can you get air inside the building? Could you put in elevators, plumbing, and electricity? Imagine if there was a fire! Who would want to live inside a mountain? The psychological effects on the human mind would probably be extreme, given that neuroses already tend to increase in densely packed urban areas.

The conclusion seems to be, yes, it can be done. But who would want to do it or use it once it is done?

The next extreme would be to forget building under compressive stress entirely and instead build out into space under tensile stress with a 36,000km space elevator. But that is another story…