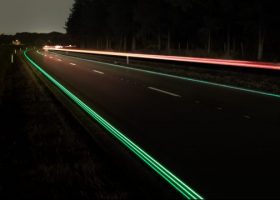 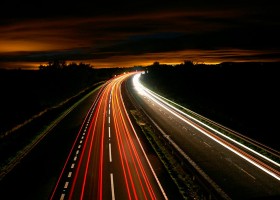 When we talk about smart roads, we’re talking about a wide variety of solutions and infrastructure that combine different technologies and realms of action. A solar road that charges the vehicles on it like a Scalextric is as “smart” as pavement that enables different modes of transport to talk to each other (V2V) or with the roadway (V2I).

So, what’s a smart roadway? Are there any already in existence? What technologies are needed for a road of this sort? Will we have to build roads from scratch, or will we be able to adapt infrastructure? Let’s look at some examples.

What is a smart road?

There is no single definition. In fact, Wikipedia offers us six completely different definitions, one for each language. We could suggest that a smart road is a roadway that incorporates advanced technology for safety, vehicle charging, or connectivity, at least generally.

Yes, there is some consensus that such a road should include some degree of technology. The parapets, rumble strips, and concrete barriers, and generally all passive measures that don’t require electricity, would be part of the first generation of “non-smart roads.” And the latest technology has given rise to all kinds of formulas.

Photovoltaic pavement and dynamic charging systems have been in the works for some time. Though they are formally two completely different technologies, it is expected that they may be used together. Recent literature dates back to 2014, when Scott and Julie Brusaw (Idaho, USA) starting a crowdfunding campaign to create hexagonal solar bricks – even though it didn’t turn out entirely well.

We have to bear in mind that solar panels must be able to withstand strong forces from heavy vehicular traffic moving at high speed. Asphalt is very effective at absorbing these tensions, which is why the solar road models below don’t have small modular elements. That same year, 70 meters of SolaRoad were installed in the Netherlands. And they have continued this solar asphalting ever since:

In alignment with its commitment to sustainable local mobility, the Netherlands has opted for solar bike paths. This form of mobility is much less demanding of pavement. But both France and China chose to install solar roadways as highways in Normandy in 2016 and Jinan in 2017, respectively. Both of these projects failed, each in its own way.

France wanted to test dynamic charging technology for vehicles. The road, which is 2.8 kilometers long, was lined with solar panels and had a network of helical cables under its surface. As with induction charging for cellphones, they wanted to charge the car while it was being driven in Normandy.

Unfortunately, there are still some loose ends. The demands of high voltage, the difficulty of adapting the magnetic flow to vehicles’ position, and the slow charging speed were some of the drawbacks. Furthermore, there fallen leaves, which cast shade, or frequent cracks in the road. But these problems helped us understand how to make improvements for the next technological iteration.

A second form of smart road involves the interconnection between the track and the rest of the infrastructure, as well as with vehicles and pedestrians. And the truth is that there is no standard that has won out yet. In 2018, the World Economic Forum highlighted a few of these technologies, some of which we discussed on this blog.

So when we talk about connected roads, we have to talk about how emerging mobility solutions (such as connected, self-driving, electric, and shared vehicles) will be adapted to infrastructure by updating connections with it, probably through 5G or 6G. One of the most interesting applications is the capacity to save lives.

In a few years, this sort of solution will assist with driving, letting the driver know that a pedestrian is crossing the street before they get there. This will prevent many accidents, especially in cases where there is no human driver.

Autonomous mobility is a key piece of the smart road puzzle, at least when we know how to make ethical decisions, which, according to MIT, we have not yet been able to formulate. But as they come, we’ll have connected crosswalks to contend with.

Called “smart crosswalks,” the link above shows a solution based on LED pavement, projectors, and pedestrian detectors. The idea is to transform our visual approach to crosswalks, making them disappear and appear as necessary. With this type of solution, the existing technology is commonly reformed instead of being totally altered.

Combining technologies without reinventing the wheel

Solar panels, communications technology, lasers, LEDs, pedestrian detectors, induction charging… the truth is that none of these technologies are new or really deserve special attention on their own. We’ve had them for decades. Interesting things only start to happen when we put them all together to give rise to new solutions.

When we’re talking about smart roads, we don’t jump directly to hyperloop solutions, nor do we magically come up with a previously unimaginable alternative transportation system. Instead, we have been optimizing Roman roads for several millennia, creating new iterations over and over again.

We’ve added pavement, passive safety elements, new materials, and, now, technology. Our goal? Increasing efficiency for wheeled traffic, improving safety, and reducing the environmental impact along the way. But the basic idea is still there. The classic wheel, whether tires made of natural rubber, synthetic materials, or even futuristic designs like wheels without inner tubes, is still at the heart of it.