The horse manure that redefined architecture

In the middle of the 19th century, houses in large cities began to be built with steps at the entrance to avoid manure.

For most of history, humanity has walked. Nowadays, the most used modes of transportation are active mobility and cars. However, there was a narrow but dense swath of human history when the horse was the default mode of mobility, one whose manure became a problem that redefined architecture and engineering.

For a while, the urban waste of horse manure was of such a volume that a complex collection system was necessary, as was strengthening the sewage system and even elevating dwellings using stairs at the entrance so that the waste would not flow in through the basement windows. There was a time when horse manure redefined architecture.

A brief history of the horse population

Horses have lived in wild herds for almost all of human civilization. While its use as a draft animal, pack animal, and a mode of transportation didn’t stop increasing in ancient times, around 1750, there was a real explosion in the equine population. Different improvements in agriculture and the deployment of the railway network made it possible to feed many horses.

The result was continuous growth of the horse population, which was no longer concentrated in the countryside to start helping out the urban population. Every year, the number of horses increased by about 3% in large cities. New York, Paris, Manchester, and London all saw more and more equines. And their manure increased accordingly. 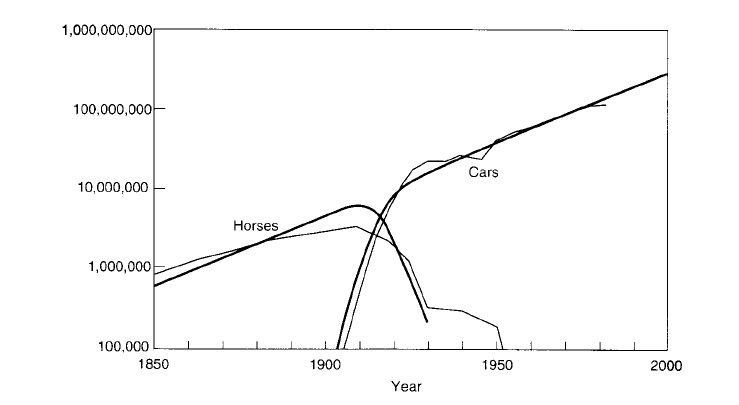 It is estimated that an adult horse can generate a little over 13 kilograms of manure per day. With a smaller horse population or one that’s scattered over an area, this isn’t necessarily a problem. In fact, manure has numerous ecological and industrial applications. But there is a maximum volume of manure that a city can withstand, just as there was a certain level of smoke from burning coal or now a certain emissions threshold.

The great horse manure crisis of 1894

In 1894, London suffered a real crisis arising from the accumulation not only of manure but also of draft horses that died due to overexertion, lack of food, and disease. Between 1831 and 1925, London was the largest city in the world, with a population of approximately 4.3 million inhabitants; in 1894, there were 50,000 horses in that city. 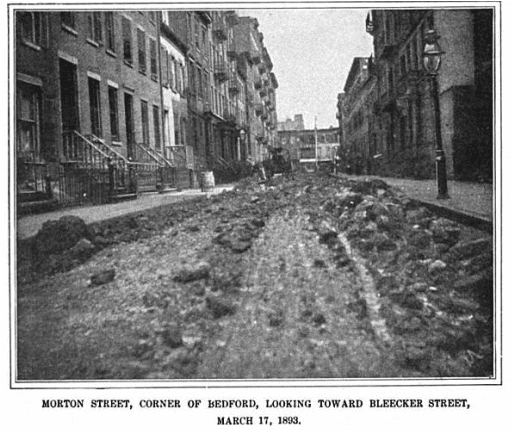 1893 Image of Morton Street in New York | Street-Cleaning: And the Disposal of a City’s Wastes, George E. Waring

No calculations are needed to see that the volume of manure posed a significant logistical problem. The same thing happened in New York. The New York Historical Society says that, before the age of the automobile, about 500 tons of horse manure were collected every day from the streets. This was the product of about 62,000 horses from 1,300 different stables. There were about 150 horses per square kilometer, producing about two tons of manure daily in that area.

Cholera and typhoid fever roamed freely in cities. That same year, The Times wrote that London was full of dust and mud, and jokes were made about the public management of excrement. Its concentration was unfathomable. It covered the pavement, clogged drains, and even came in through windows in some neighborhoods. 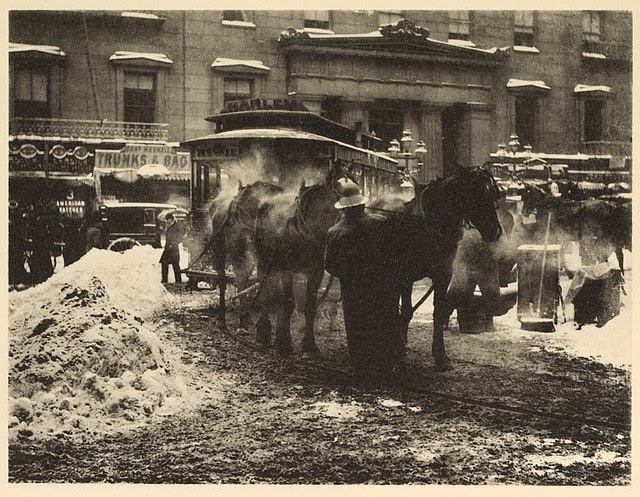 The problem was so great that, in 1898, when the first international conference on urban planning was held in New York, the main topic was what to do with manure. Three days later, it dissolved when they were unable to come up with a solution. Paradoxically, the problem went down only a few decades later, and the solution came from the automotive world, as we will see. But what palliative measures were used for those decades?

Expansion of the sewerage network

Cities like London and New York were major centers of diseases due to overcrowding (not to be confused with urban density) in ancient times. Few cities, though, come close to 19th-century Memphis (Tennessee). It had cholera and yellow fever epidemics in 1849, 1866, 1867, 1873, 1878, and 1879, which is why it became necessary to expand and renovate the sewer network. 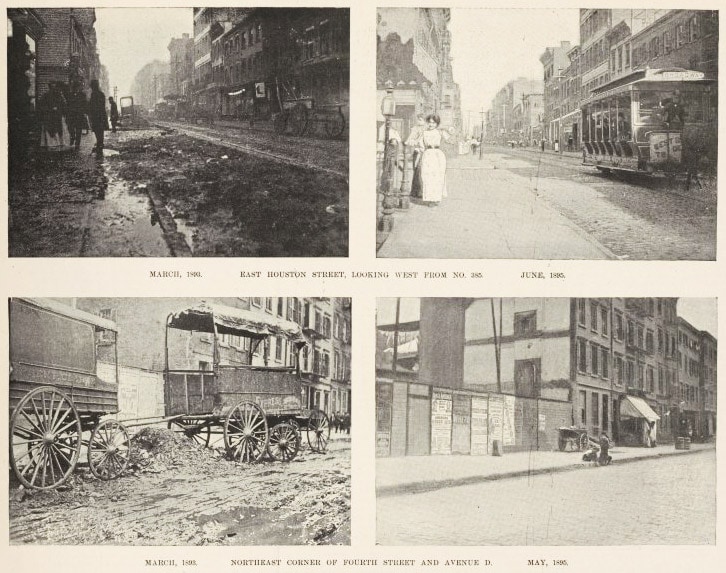 Something similar happened in New York in 1881, the year the Sanitation Department was founded. Its biggest battle was in manure management. They even hired an army of street sweepers called the White Wings.

Some cities like London spearheaded renovations of their sewerage networks decades earlier than others. In 1815, London channeled a good part of the collection of fecal waters and waste on the pavement. In Boston, this happened in 1833, while Rome did it in 1865; Paris waited until 1880. But every city had to take this measure.

Another major architectural change of the 19th century was the way much of the infrastructure was elevated, with a focus on residential areas and public buildings. And for good reason. As recounted in Superfreakonomics (2009), plots saw horse manure pile up to heights of 18 meters. When it rained, those piles often started flowing. 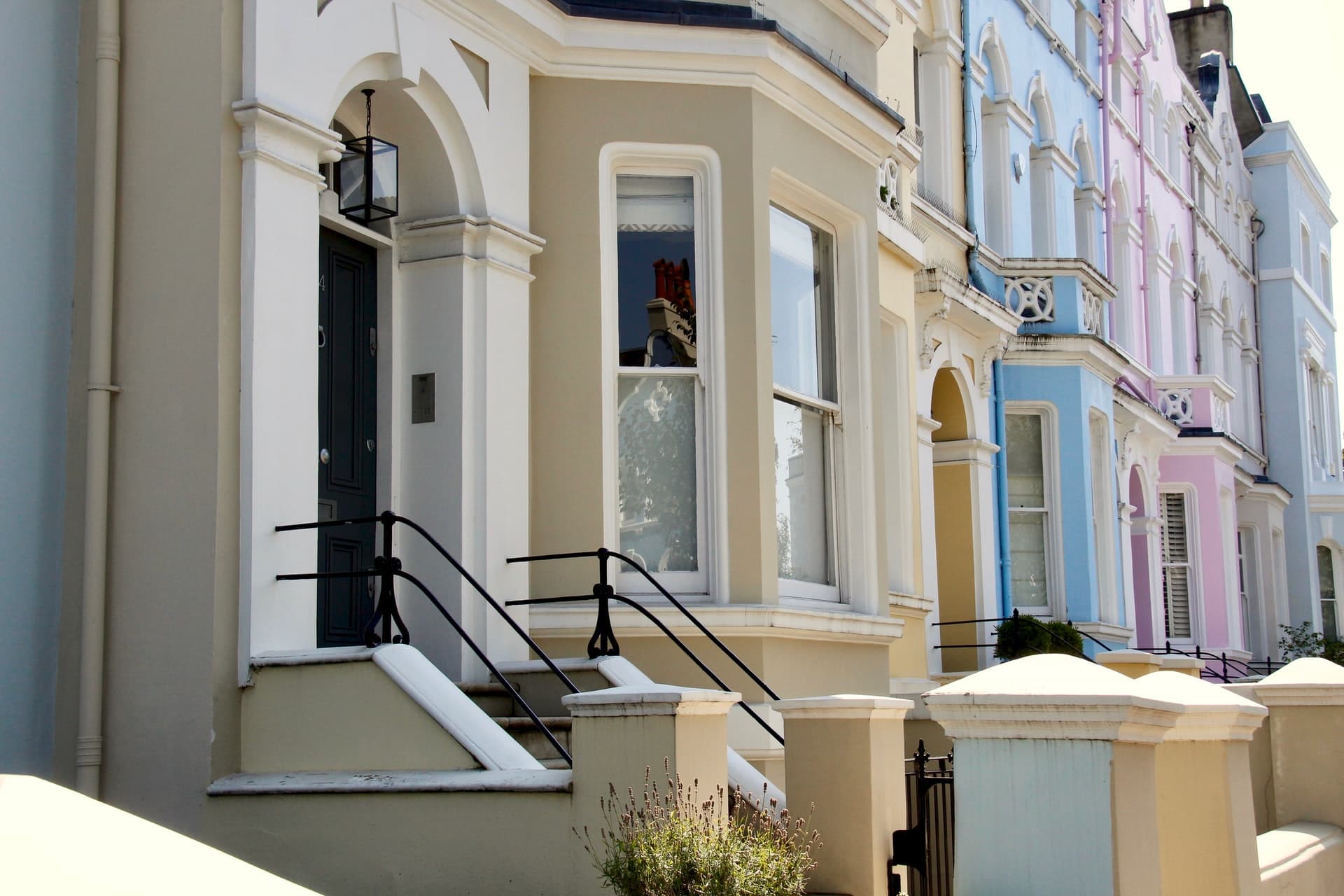 While this didn’t solve the problem at the source, raising the ground floors with a staircase in the front of the building was the architectural solution that spread wherever horses appeared. Nowadays, this is considered a purely aesthetic element, as well as an accessibility barrier, but back in the day, it was a relief for neighbors and passers-by who used them.